Paxton Pomykal On Nico Estévez, The FC Dallas Academy And His USMNT Status 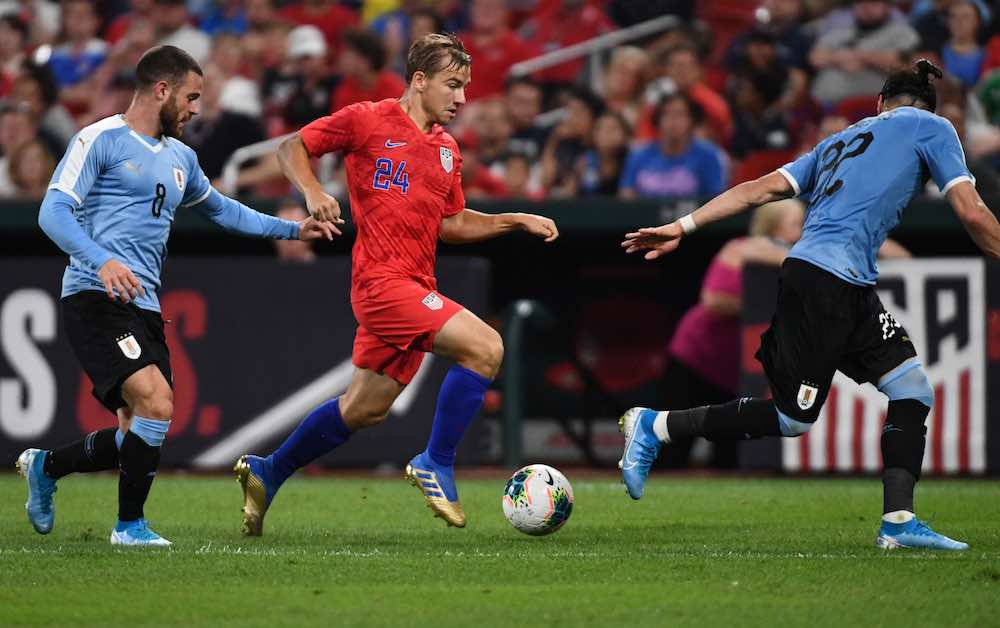 FC Dallas have been in fine form this season, sitting in the playoff places after 21 games and playing some exciting, attacking football.

Paxton Pomykal has been one of the first names on the FC Dallas teamsheet this season, and after training on Thursday — a lighter session with video prep and instructions from head coach Nico Estévez — spoke to WFi about the season so far.

Estévez has the side playing with so added pace in the attacking third especially, and since arriving has imprinted his style of play on the side, having also taken into consideration the players at his disposal.

“He had an idea coming in and brought a few players in that would work, let go of some players and also kept some on the roster he felt could fit his roles and system,” Pomykal says of Estévez.

“Specifically with myself, in the way I play in the middle with almost a triple 8 in a 4-3-3, it’s important to have range, both forward and back. You have to be able to defend as well as attack for him.

“Someone who is a true 10 may suit a 4-2-3-1 better, maybe not with how we play with the centre midfielders pressing the fullbacks and helping out in 2v2s and things like that.

“I feel I fit well in the system, but he definitely had an idea of how he wanted us to play to instil our football on other teams.”

Arriola to Pomykal to Ferreira… pic.twitter.com/8TIDMWz0lm

Estévez arrived at FC Dallas after some time as an assistant for the United States men’s team. His philosophy for how he wants his team to play is similar to how the USMNT play now, and moving into a head coach role he has had the chance to affect players as a group and individually.

“Nico and I have a really good relationship,” Pomykal says of how his head coach helps his own game.

“Even before he came to FC Dallas, we would speak at points during the USMNT, he would come and see training at Dallas so it was a smooth transition for him coming here as head coach.

“He has taught me a lot to develop my game and get back into the midfield. Certain aspects that different coaches bring can really help with the little details he notices and passes on.

“Everyone looks at the game differently and that’s the beauty of soccer — it’s not learned one way and there are so many ways to play.

“It’s nice to have a different perspective to add to this, from someone coming from a Spanish philosophy and seeing that side of the way soccer can be played.”

Pomykal also believes the new arrivals in the team this season, such as Paul Arriola and Alan Velasco, have helped his game, and the group have been able to build relationships on the pitch.

“The key has been the building of chemistry,” says the 22-year-old. “We have a really great locker room and it all starts off the pitch.

“All of us are playing a role in building morale and it’s a great atmosphere amongst us which translates onto the field.

“For Paul to come in it was easier as our system is similar to the national team style, and we were able to help guys like Alan who have come from Argentina where he would have played slightly differently.

“To be able to be happy as a group and communicate helps get the links on the field successfully.”

Of his own role within this group, Pomykal adds: “I have definitely taken more of a leadership role in the past couple of years.

“I’m still young but it’s my seventh year on a roster and I know the staff, players and club really well. It’s easier for someone like me to help new guys learn the culture here and help people settle.”

Pomykal came through the club’s academy and made his way into the first team very successfully.

The academy in Dallas has received continuous praise for the players it develops and it has become quite profitable in recent seasons especially.

Ricardo Pepi is the most recent example with his move to German side Augsburg at the start of the 2022 season for around $20 million.

“For me, personally, it wasn’t a high priority to become a pro at Dallas when I arrived at the academy,” Pomykal says of his time as a youth player.

“I always put education first and thought if I would make it I would in some way. I would go through college, get a scholarship, playing time there and see if it happened from there.

“I learned that the pathway to the first team was an option and it was real while I was in the academy. I thought I grew a lot in the academy, and those years really developed me and I excelled in the academy.

“We are all in one place, the first team and the academy are all together and train on the pitches next to each other. While we train, players will switch between groups and it’s nice to have the option.

“You could be called up right after school while I was in the academy and that helps you acclimate and grow as a player.

“Seeing guys like Kellyn Acosta having been through the academy and into the first team, and able to be around it, really helps you see the opportunities are there.”

Pomykal has been around the national team throughout his young career so far, though the constant increase in top-level competition amongst the USMNT has made it difficult to break through fully. Injuries have also hampered him in this regard.

There are a lot of players in the squad who are now playing in Europe rather than Major League Soccer but the level of the league continues to increase and there are a number of players committed to remaining in MLS rather than chasing European moves.

“The goal is always to be in the mix,” Pomykal says of his national team status. “But with the way my injuries have played out and playing a lot of time on the wing last season, I didn’t dominate games or play how I should.

“It’s not a priority for me at the moment. I’m just giving all my focus here and training to be a better player for the club. Other things will follow, but it’s not something I think of too much.”

Pomykal is driven to develop and continue to improve as a soccer player. He wants to be the reason his side is winning and be an influential part of the group.

He has the flexibility to play out wide but he has shown he can be more influential in this central role in Estévez’s system.

This season, FC Dallas broke their transfer record when they brought in Velasco for around $7 million, and there have been even more high-profile players coming in from Europe.

LAFC arguably lead the way with their signings of Gareth Bale and Giorgio Chiellini, while Toronto FC have added Lorenzo Insigne and Federico Bernardeschi to their ranks.

“It’s awesome!” Pomykal says of this latest influx of star players. “No one in the league would be unhappy with top talent coming in of any age.

“Each player brings new skills and talent from older pros to young exciting players who help raise the level of each team with new experiences, it’s fantastic for the league and the players.”