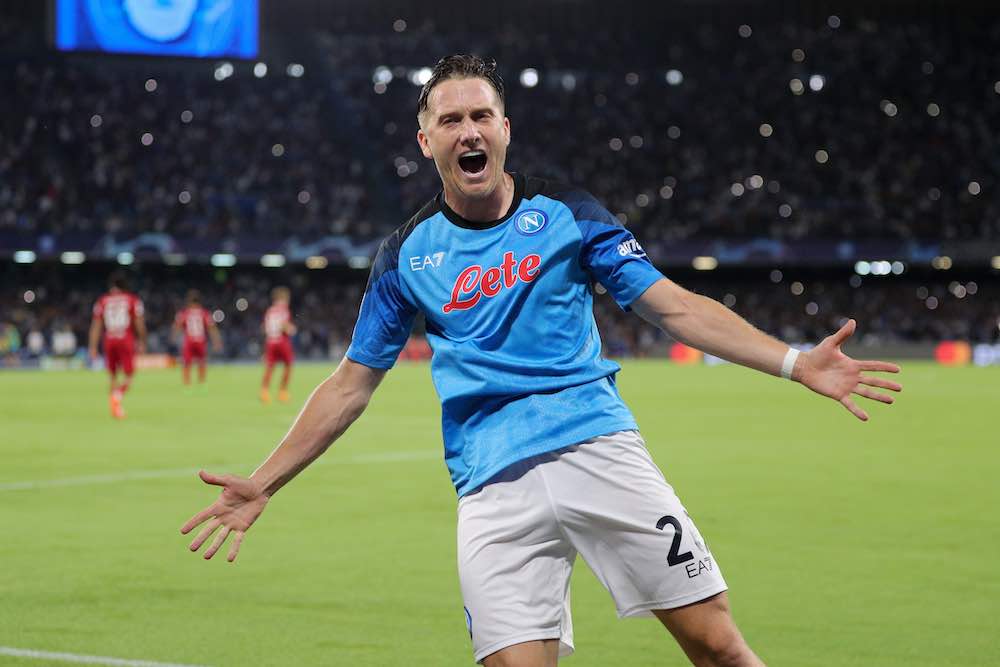 The Italian outfit beat Liverpool 4-1 at Stadio Diego Armando Maradona in the opening game of the Champions League group stage.

Piotr Zieliński opened the scoring in the fifth minute before André-Frank Zambo Anguissa doubled the advantage in the 31st.

Giovanni Simeone added a third one minute shy of half-time before Zieliński scored his second and Napoli’s fourth two minutes into the second half.

Luis Díaz pulled one back two minutes later but it was to prove a mere consolation.

As Ajax routed Rangers 4-0 earlier in the evening they’ve taken top spot after matchday one – the Dutch side lead on goal difference – but Napoli are ready to compete.

They looked head and shoulders above Liverpool. Soundtracked by the raucous atmosphere provided by a heaving Stadio Diego Armando Maradona they pressed Liverpool high and attacked them without an ounce of fear or trepidation.

Napoli registered more attempts on goal than Liverpool (18 to 15) and landed more of their punches (nine to seven). This is despite them seeing less of the ball (38%) than Liverpool.

Not only did Napoli outperform Liverpool in terms of attacking metrics but they did the same in terms of defensive metrics.

The Italian outfit made more tackles (22 to 16) and interceptions (16 to nine) than their opponents. They looked hungrier.

It was in midfield that the battle was won. Anguissa and Stanislav Lobotka both made 16 pressures and 41 carries each – that was more than any of their teammates.

The former, in particular, ran the game from start to finish.

Nobody else on the pitch completed more tackles than him (seven) and nobody made more interceptions than him, either (four). Aside from his goal he was also neat and effective in possession, completing 40 of 47 attempted passes (85.1%).

The Cameroonian played with a clarity and confidence that was absent in Liverpool.

The key for Napoli now is to weaponise that performance and use it as a launchpad.

They’ve started the season strong both in Serie A and the Champions League.

They entered matchday six second in the table, two points shy of Atalanta and ahead of Milan – the reigning champions – on goal difference. Nobody has scored more goals than them this season (12) and only Atalanta and Juventus have conceded fewer times (four).

The race for the Scudetto is wide-open this year and Napoli will fancy their chances of staying in it as far into the spring as they can. They’ve not been crowned champions of Italy since Diego Maradona wore their blue shirt – their two wins came in 1987 and 1990.

That team also won Napoli’s sole European honour to date – the UEFA Cup back in 1989.

Winning the Champions League is improbable given the calibre of the clubs involved in the competition but a deep run is absolutely possible – especially after beating Liverpool in the fashion in which they did. To back them see these betting sites with free bets.

Given the way they’ve strengthened their squad amidst a summer of wholesale change they’ll have confidence and belief that they can improve on that this year.

They have the talent and they certainly have the supporters – anyone who heard the roar of the Stadio Armando Maradona at the end of the Champions League anthem on Wednesday can attest to that.

Loading...
Newer Post
On The Ball: 2 Teams Who Have Had A Good Build-Up To Qatar 2022
Older Post
Craig Brown On Teaching, Management And Dalglish – ‘The Greatest’