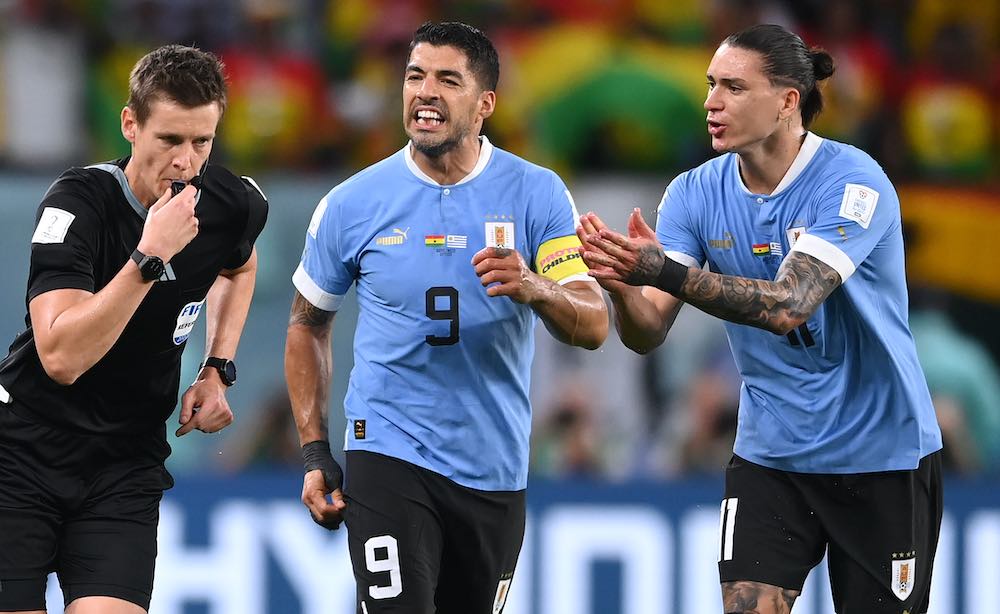 Louis Smith takes a look at how South American teams have fared at the 2022 World Cup in Qatar, beginning with the two sides who exited at the group stage, Ecuador and Uruguay.

Ever since qualifying for the 2022 World Cup (both on the pitch and in court) the mood in Ecuador had been pinned to the first game against Qatar.

Playing the hosts is never an easy task and Ecuador went into the game hoping to create history by becoming the first side to inflict defeat on a host nation in the tournament’s first game.

Perhaps, La Tri players were feeling slightly nervous, but this wasn’t showcased in the opening moments.

In a squad full of youth, it was veteran striker, Enner Valencia who thought he had given Ecuador the lead inside three minutes, but VAR found an infringement for offside in the build-up to the goal. Ecuador could have let the decision get to them, but instead, it had no effect and a short period of time later, Valencia would put Ecuador 1-0 up from the penalty spot.

15 minutes later, Valencia doubled his tally after getting on the end of a lovely cross from Angelo Preciado, giving Ecuador complete control of the tie.

Qatar never really threatened Ecuador, with their greatest chance of the game coming at the end of the first half through Almoez Ali – who fired his header wide.

With many people having their eyes on the opening game, several were quick to say how boring the second half was, which was a credit to Ecuador’s game plan, as they controlled the second half, not taking any risks, ensuring they picked up their first World Cup victory in eight years.

An impressive Dutch side led by Louis Van Gaal was up next, the Netherlands came into the game on the back of a mixed display against Senegal which saw them grab two late goals in a 2-0 win.

Ecuador fell behind early on in the game which was going to be a test of character for their young squad. In truth, they went on to be the better side in the match, the first half saw them have numerous chances and just before the break, Brighton’s Pervis Estupiñán thought he had put Ecuador on level terms before the goal was ruled out for offside after Jackson Porozo was deemed to have blocked the view of Dutch Keeper, Andries Noppert.

The second half saw Ecuador immediately get back into the game, once again thanks to Enner Valencia. However, despite having five shots at goal and limiting the Dutch to just a single effort on goal, La Tri had to settle for a point, when they probably deserved all three.

Unfortunately, it wasn’t to be for La Tri who looked burnt out come their crunch game vs Senegal. In the first half, they failed to really test Senegal’s Édouard Mendy and towards the end of the first period, a foul from Piero Hincapie saw Ismaïla Sarr give Senegal the lead from the penalty spot.

Ecuador controlled the ball in the second half and Moises Caicedo placed the sides on level terms, before a sucker punch from Kalidou Koulibaly, saw the South Americans crash out of the competition.

Despite not making it through to the knockouts, Ecuador can hold their heads high, they put on a great showing and can feel a little hard done by that they didn’t make the groups.

They breezed through the opening game when it could have been awkward and then went toe-to-toe with a strong Dutch side and the Champions of Africa.

It’s safe to say, they’ll be back and back stronger, in future tournaments and their players will use this experience to their advantage.

Two-time world cup winners Uruguay had one of the best squad announcement videos, but their opening match against South Korea was one of the worst.

The opening moments of the game saw South Korea come out of the blocks hoping to cause an early surprise by putting the Uruguay backline under pressure and keeping possession.

Once the game began to settle it was Uruguay who had the majority of the ball but rarely threatened their opponents with the possession they had, which would go on to be a common theme.

South Korea adopted their game plan to perfection by frustrating, the South Americans who were too slow when moving the ball and lacked creativity. After the game, many fans were questioning manager Diego Alonso’s decision not to use Giorgian de Arrascaeta, who provided ten assists in the Brasileirão this season for Flamengo.

Up next was Portugal, who Uruguay knocked out of the previous World Cup in the knockout stages, but this time it would be a different story.

The first half saw just one shot on target a piece from either side, in what was a frustrating half for both sides. Uruguay once again looked slow in possession but remained in the game. That was until a Bruno Fernandes cross-cum-shot nine minutes into the second half found its way past Sergio Rochet to give Portugal a 1-0 lead.

Alonso had to act and he did, bringing on Facundo Pellistri, de Arrascaeta and Edinson Cavani. Immediately, Uruguay looked better and started to create chances, Gomez hit the post and Suarez hit the side netting, but they couldn’t find the cutting edge.

Then in a moment of controversy, Fernandes put Portugal 2-0 from the spot after Jose Gimenez was deemed by VAR to have deliberately handled the ball inside the box.

To Uruguay’s fury, the match ended 2-0, meaning their final group match with Ghana was a must-win.

The last time Uruguay played Ghana was in the 2010 World Cup in South Africa where La Celeste advanced on penalties in a game that saw Luis Suarez save the ball on the line before Asamoah Gyan’s spot kick hit the bar, making Suarez a hero in Uruguay, but a villain in Ghana.

Having to go for it, Alonso started his main goal provider, de Arrascaeta, behind a front three of Darwin Nunez, Suarez and Pellistri.

As in South Africa, Ghana were awarded a penalty after a foul by keeper Rochet, who redeemed himself moments later by denying Andre Ayew from the spot. The save seemed to spark the match and Uruguay into life.

Uruguay took the lead when de Arrascaeta was quick to pounce on a Lawrence Ati-Zigi save from Suarez, before a wonderful teamwork saw the Flamengo man add a second for Uruguay with a delicious volley.

At the break, Uruguay were leading 2-0 and Portugal and South Korea were drawing 1-1, meaning if things stayed as they were Uruguay would go through with Portugal, but a goal for South Korea would mean they’d be through on goals scored.

All was going ok for Uruguay, they sat back protecting what they had, hoping to maybe catch Ghana on the break. However, a stoppage-time goal from Hwang Hee-Chan in the South Korea game meant Uruguay had to find a third goal to go through. At this point, Nunez, Pellistri, Suarez and de Arrascaeta had been taken off.

Cavani thought he should have had a penalty, but the referee denied his appeals and a free-kick from Nicolas De La Cruz was saved by Ati-Zigi, ensuring Uruguay were out at the group stage for the first time in five World Cup finals.

Diego Alonso’s reluctance to play his attacking threats in the opening two games has ended up costing Uruguay. They were seen as dark horses before the tournament began and they will feel that they have underachieved, following the tournament,  it’s unlikely that Alonso will keep his job.