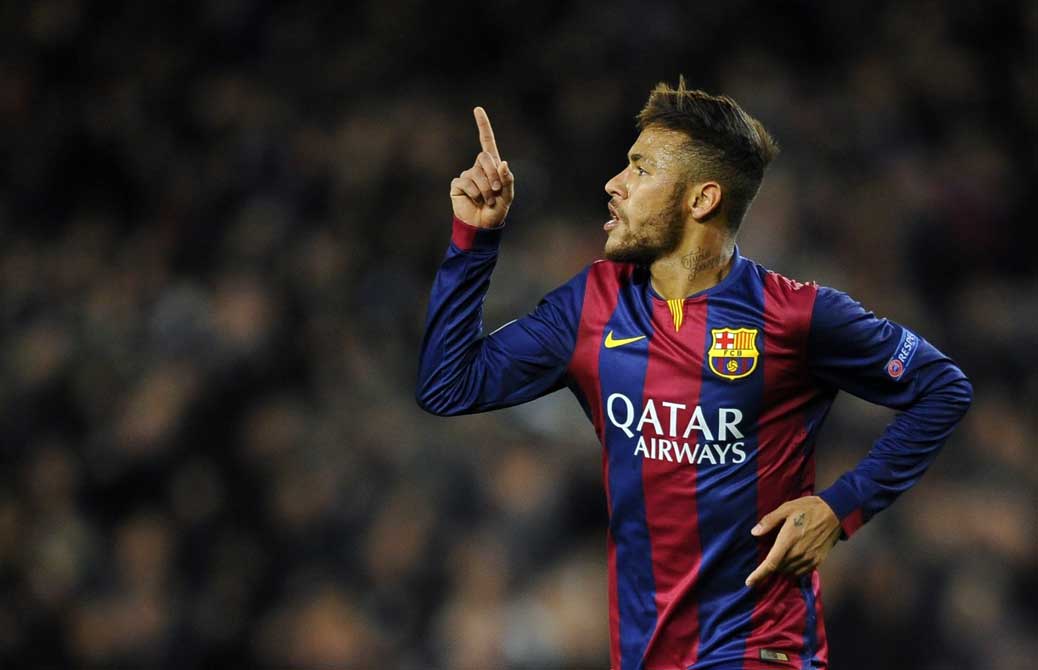 Manchester United are willing to meet the £157 million release clause in Neymar‘s Barcelona contract according to Rob Dawson.

The Old Trafford club are one of three clubs that would be willing to activate the clause along with La Liga rivals Real Madrid and mega spenders Paris Saint Germain.

Neymar moved to Barcelona in 2013 from Brazilian club Santos in a controversial deal that is believed have seen his parents pocket £34 million from the purchase.

“There are three big clubs in the world that want to sign Neymar and pay a clause of €200m to Barcelona. I cannot say more than this because it is sensitive. I can only guarantee that Neymar is happy at Barcelona.”

It appears Ribeiro is intent on extracting as much money as possible out of the Catalan club in contract negotiations by mentioning other suitors.

Manchester United are also interested in bringing Armenian international Henrikh Mkhitaryan to Old Trafford this summer as the impasse continues with his club Borussia Dortmund.

Mkhitaryan is entering the last 12 months of his contract with the Bundesliga club and is apparently keen on a move to the Premier League with Arsenal and Chelsea also attributed with an interest in the attacking midfielder.

Here in lies the problem. Borussia Dortmund are a club that rarely sell a player they don’t want to sell unless, a release clause is activated. Against an agent in Mino Raiola who normally gets his clients the move they desire.

It’s expected that if The Red Devils were to make an offer in the region of £25 million it may be too good to turn down for Dortmund under the circumstances.

Sunderland are interested in bringing Edin Dzeko back to the Premier League and have made an offer of £11 million to Roma according to reports in Italy.

Roma are said to be holding out for £15 million for the Bosnian according to the report, which also claims the Mackems are proposing to pay £140k per week for his services.

Given that the present highest earner at Sunderland is Jermain Defoe and on considerably less than £100k per week, it arouses suspicion that figures emanating from  Italy don’t appear to stack up.

The 30 year-old former Manchester City man joined the Serie A club initially on a loan with an option to buy that would become a mandatory purchase once certain performance related goals were met. Initially Roma paid  €4 million and a further  €11 million to make the deal permanent.

Since moving to Italy Dzeko has scored 8 goals in 31 Seria appearances for the Giallorossi.

Sunderland are also believed to be interested in Wolfsburg striker Bas Dost. The Dutch man, who stands at 6 foot 5 inches was once a target for bitter rivals Newcastle United.

Since joining Wolfsburg, Dost has netted 36 goals in 84 Bundesliga appearances.

His size and physicality would be deemed by many as the ideal Sam Allardyce forward.

Dost – 27 – is entering the last 12 months of his contract at the German club, who are believed to be willing to cash in now rather than watch him walk away for free next summer.

Chelsea and Arsenal are fighting with Barcelona for the signature of Lille’s diminutive attacker Sofiane Boufal according to The Observer.

The Moroccan international is available this summer for a fee believed to be in the region of €25 million.

Liverpool and Tottenham Hotspur have also scouted the player on several occasions in the past season.

Spurs are believed to have already held talks with the former Angers man who arrived at Lille for only €4 million from the Loire valley club.

The player’s agent confirmed on Saturday that talks have already taken place with Barcelona.

“We did have a meeting with the leadership of FC Barcelona in the last few weeks.There is an interest,”

“Now the reflection is whether Sofiane Boufal will go to Barcelona to compete with MSN (Messi, Suárez and Neymar) or should he go to a club where he is going to start matches and express his exceptional talent.

“We have also initiated discussions with three other clubs that interest us, but they either have or will change their coach or the coach is in charge of a national team at the Euros.

In England, there is interest, but the English market is just beginning. A transfer of 20 and 25 million euros is not resolved in two weeks, of course.”

Liverpool defender Martin Skrtel took to social media on Saturday to quell the rumours that he had agreed a deal to join Serie A club Roma this summer.

The Slovakian said: “There is nothing decided on my future yet. I am fully focused on the Euros and will have a look at the other stuff after. I will keep you guys informed.”

Manager Jurgen Klopp watched the 29 year-old Mercado play for Argentina when they played Chile in the Copa America on Tuesday.

”Klopp likes him. But for Mercado to go to England, Argentina need to be champions. Winning a title with the national team would allow him to play in England.”

Leicester City are close to completing the signing of the France Under-21 midfielder Nampalys Mendy from Nice after the Riviera club accepted a revised offer of around £10 million according to Ed Aarons.

Leicester City manager Claudio Ranieri knows Mendy from his time as Monaco manager where the youngster played under the  jovial Italian.

The 23-year-old defensive midfielder will be considered by many as the ideal replacement for the France international N’Golo Kante who is wanted by Manchester United.