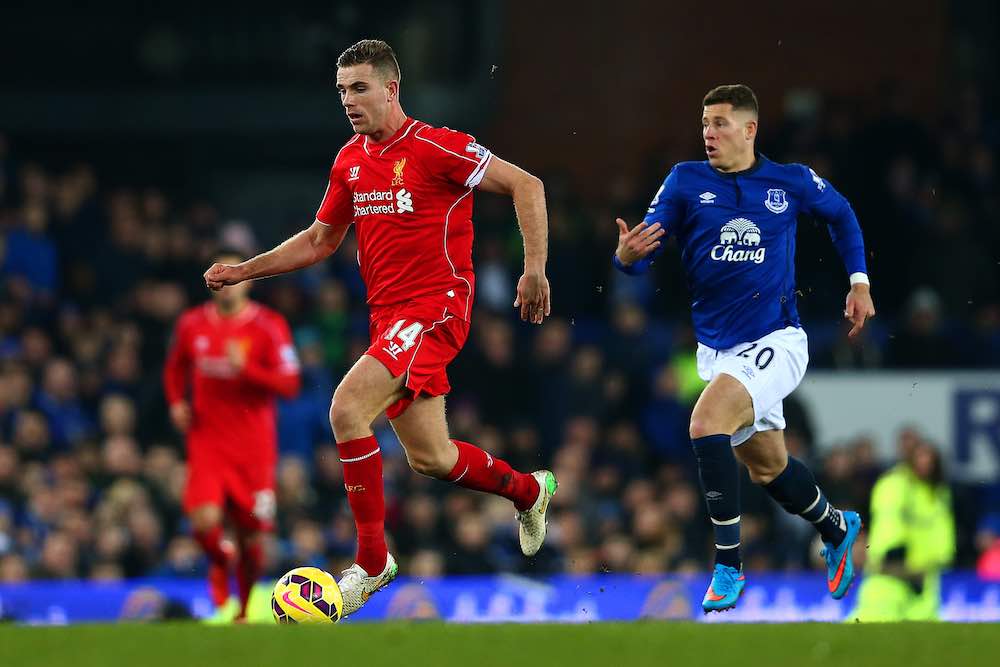 It looked like Jordan Henderson’s part in the derby was over. Midway through the second half the Liverpool captain was on the receiving end of a potential bone-breaker from Everton’s Ross Barkley.

His manager Jurgen Klopp raised his hands to his head immediately, fearing the worst.

The pace and sloppiness of the 227th Merseyside Derby meant that it might have been easy to miss the dangerous nature of the tackle. Referee Mike Dean and his assistant on that side must have missed it, else a red card would have been shown. Replays showed that, without any doubt, the tackle was worthy of a dismissal.

The stretcher was called for but Henderson eventually lumbered to his feet, and for the next 20-minutes he would recover and epitomise his side’s derby spirit.

Barkley, meanwhile, looked like he wanted to get sent off, but it was one of those games where nothing worked for the 23-year-old and he couldn’t even get a derby red card as a badge of honour.

Liverpool improved throughout the second period, and even though his wasn’t the best individual performance, Henderson was the leader during this change in mentality and style.

“It’s all about a possession game because we were not clear enough. Dejan [Lovren] took the ball direct, he closed his own passing options for this move and it was too easy to defend, so everything was hectic.

“That was the problem sometimes. We maybe played too quick in this direction. We needed to learn, and that’s what I really loved tonight, that we did it so much better in the second half, that’s really important. You need to fight for every single ball and we did too.”

Georginio Wijnaldum was a key part of the improved possession game, but Henderson was the instigator.

As the holding player he’s responsible for finding those ahead of him and opening up the passing options Klopp spoke of by keeping the shape at the base of midfield.

The Liverpool captain mande 34 passes in first half, but in the second this rose to 50.

His level head in possession was reflected in his mentality, and while there was no lack of derby passion as he squared up to Barkley later in the game, he remained unruffled and stayed on the right side of the referee.

Henderson found the perfect balance between derby passion and professionalism. Whereas a Liverpool born captain such as Steven Gerrard, who was sent off twice in Merseyside derbies, might have become more involved, the new man at the helm kept his cool and maintained his discipline.

The Sunderland born midfielder knows all about big local rivalries, and the two Tyne-Wear derbies he played in during his time at his hometown club provided experience of this type of atmosphere at a young age.

After the game he even played down the Barkley tackle, showing he has the wisdom to manage things which happen at club level with the national team in mind.

“It was pretty late but I know Ross well, he’s a good lad, I’m good friends with him,” said Henderson in the tunnel after the game.

“I think he just mistimed the tackle, Obviously after the game he apologised, it was a little bit late, but thankfully I’m all right. It was just mistimed, you’re going to get them in derby games.

“It’s a derby, it doesn’t matter if you’re friends off the field or at international [level]. When you’re on the pitch you give 100 percent to win the game and we were doing that. Then after the game, you shake hands you move on and I wished him all the best.”

When he was made Liverpool captain by Brendan Rodgers in the summer of 2015, doubts were raised as to whether Henderson was strong enough, old enough, and even good enough to captain the club.

While the armband may have been given to him a year or two too early, he’s since grown into it and also become a mainstay in the side in his deep lying midfield position under Klopp.

Games like this Merseyside derby show how far Henderson has come, and while he’s not a spectacular player (his wonder goal at Chelsea aside!), he’s the type of player every team needs.