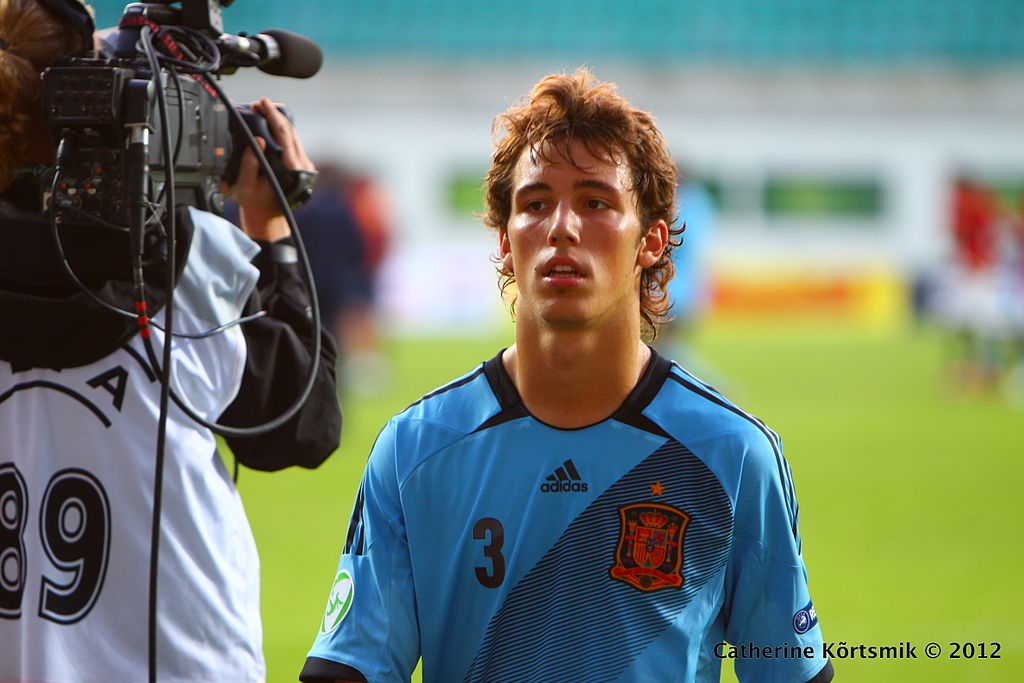 There are few football academies that can hold a torch to Barcelona’s La Masia in terms not only of the quantity of players produced, but also the quality of those players.

That is not to say that every player produced at the famous academy will necessarily become part of the first team setup at Barcelona.

Instead many graduates have found their way to leagues around the world where their footballing education leaves them in good stead when it comes to carving out a career within football.

One of the most impressive recent graduates is currently plying his trade with Benfica in the Portuguese top flight and his performances have led to covetous glances being cast in his direction by some of Europes biggest sides.

That player is left back Alex Grimaldo.

There was surprise in some quarters when Barcelona allowed the young full back to leave. There was a feeling around the club that Grimaldo was one of the most talented youngsters that the club had produced in recent years, and this belief coupled with the lack of conviction felt towards current left back Jordi Alba meant that many saw Grimaldo as the answer to something of a problem position.

Instead Grimaldo was allowed to cross the border into Portugal, joining Benfica for less than £2M.

Benfica are well known as a hothouse for young talented players, both developed in house and bought in to be sold on at a later date.

So far the young Spaniard has exceeded all expectations at the club and he has quickly become an indispensable part of the first team setup.

Perhaps best known as an attacking threat down the left hand side of the pitch Grimaldo is extremely quick and tactically aware enough to use his pace to cause maximum damage to the opposition.

He is comfortable either moving through the thirds in the wide area of coming in to more narrow positions to link the play centrally.

Capable of accurately crossing the ball as well as playing more intricate passes in the central areas, Grimaldo is also effective in the final third as a provider of goal scoring chances.

In terms of actually capitalising on some of the positions that he finds himself in beyond the opposition defensive line, he needs some development to improve composure and finishing.

As I mentioned above one of the overall strengths of Grimaldo’s game is his capacity to support the attacking movement from the wide areas.

He can use his pace to stretch the opposition defence by holding the width on the touchline, or he can move in to more narrow positions to link in with the central midfielders and strikers, should the wide attacker hold the line.

Having a fullback who is equally comfortable in either role is incredibly important in the modern game as it gives a layer of flexibility to your tactical approach. This can help to unlock teams that sit in a deep block and seek to deny your side space.

As the ball carrier looks to run with the ball and attack the opposition right back we see Grimaldo quickly look to support his teammate with a run along the outside.

Movements in this manner may seem simple but they are designed to force the immediate defender off balance as he suddenly has to cover the threat of the pass outside along with the position of the ball and the man in possession.

Grimaldo is tactically intelligent which is what you would expect given his education in La Masia, and he has a very strong understanding of space in terms of how to exploit open spaces on the field and how to create room for others with his movement.

You will often see him making similar supporting runs from deep positions even though he is aware that it is unlikely that he will be the target for the pass.

On this occasion Grimaldo makes his supporting run from an inverted position with his teammate in possession choosing to hold the width of the pitch.

He has already moved up to the same line as the forward players on the pitch to support the attack, and he recognises the opportunity to overload the opposition right back making a run in beyond the defensive line and out to the wider position.

As he makes this movement he isolates the right back from the rest of the defensive structure, and gives the man in possession the option to play the ball down the line in to space or cut back in to the central area.

The movement from inside to outside in this manner also serves to create space centrally as the nearest defenders will be forced to move to cover the run being made by Grimaldo.

As a modern fullback it is essential that you are able to effect the opposition in the final third of the pitch.

Another key attribute required for a top level fullback in football today is the ability to use the ball intelligently and efficiently when they do get in to space in the final third. Once more, as a player educated extensively at La Masia, Grimaldo has this ability.

Indeed, vision is one of the biggest strengths of Grimaldo’s game but he couples this with the technical ability to make even the most difficult of passes when he is in the final third.

This image is taken from a Champions League match against Napoli and Grimaldo has possession of the ball right on the touchline having bypassed the entire defensive block.

He has arrived at his current position at speed and slightly off balance. For most fullbacks in this scenario, merely clipping the ball in to the danger area would suffice and count as a good effort. Grimaldo, however, has the technique and the vision to not only see a free player in the penalty area, but to make the pass to his feet and create a goalscoring opportunity.

Once again Grimaldo has found himself in a more central position of the pitch having advanced from the left back position.

This time the challenge is slightly different from the first example as he is facing a deep and compact defensive block sitting in front of him.

Instead of trying to force his way through with a vertical run or turn the ball back to a deeper teammate, Grimaldo simply waits on the ball for the best option to present itself.

As his advanced teammate identifies a seam in the defensive block and moves through it, Grimaldo has the technical ability to make the pass through the block for the attacking player to run on to. As touched upon previously Grimaldo has an excellent appreciation of space and how best to access the space in the attacking phase to bypass the defensive block.

This also extends to an ability to accurately play the diagonal pass across the field for his opposing fullback or winger if they have been left isolated against an opposition defender.

Having the ability to run with the ball, play short combination passes to advance up the near side of the pitch or switch the focus of the attack with a diagonal pass makes Grimaldo exceedingly difficult to play against.

As well as providing an attacking threat with his pace, movement and vision Grimaldo adds as extra string to his bow with his ability to strike a dead ball.

Overwhelmingly left footed, he is capable of bending the ball with a fantastic trajectory or by dropping the ball delicately over the defensive wall in to the corner of the goal.

From the wide right the expected trajectory would see the ball crossed in towards the six yard box for a running player to meet.

Instead Grimaldo has the confidence and the technique to bend the ball in to the far top corner.

This time the ball is in a more central area and Grimaldo has the capacity to simply lift the ball delicately over the wall and in to the bottom corner.

As a development club Benfica will soon be looking to cash in on their minimal investment in Grimaldo, especially as the player at the height of his form at the moment.

There is still the possibility that he will return to Barcelona who are not immune to taking former players back once they have developed elsewhere.

There is no doubt that he will be on the move sooner rather than later, the only question is just how high the fee will be.