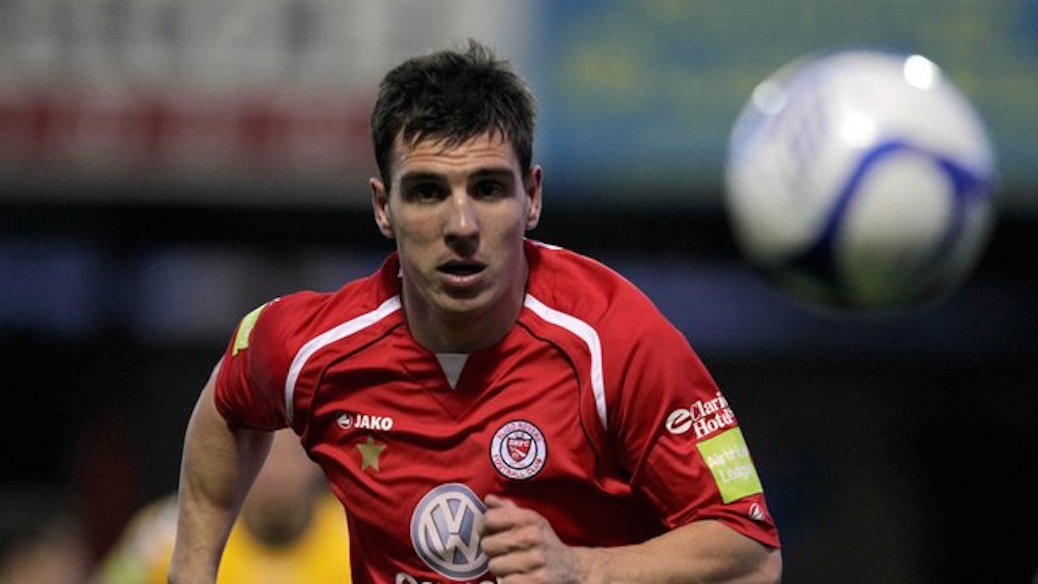 It’s not often that I get to do a football article about a player I know personally, a friend even. A player I speak to on a regular basis and a player who I admire, but this is one such article.

As a football fan, there are very few players I would associate the word ‘legend’ with.

Maybe the likes of Steven Gerrard at Liverpool or Lionel Messi at Barcelona are deserving of that particular accolade, but for me there’s one player in the League of Ireland who deserves that title, and that’s ex-Sligo Rovers and current St Patricks Athletic defender Gavin Peers.

Peers started his footballing career over in England with Blackburn Rovers in 2002. He spent three years with the English outfit before moving to Mansfield Town. While there he made 20 appearances and scored 2 goals.

After suffering a bout of home sickness, Peers decided to leave the UK and move move back to Ireland, saying it was one of the hardest decisions he ever had to make. In 2006 Peers signed for Sligo Rovers.

Rovers had just been promoted back in to the Premier Division and manager Sean Connor saw Peers as the type of defender who could add a lot to the inexperienced Rovers defence.

For much of the 2006 season, Peers was deployed at right back but when Michael McNamara and Liam Burns both left the club in 2007, Peers moved to his preferred centre back role and the rest is history.

In his first season at the club, Rovers finished a respectable fifth in the league.

While at Rovers, Peers worked alongside some of the greatest managers ever to walk through the gates at the Showgrounds, managers like Sean Connor, Paul Cooke (current Portsmouth manager) Ian Baraclough (current Oldham Athletic assistant manager), Mickey Adams, and current Rovers manager Dave Robertson.

Peers has also played alongside some great players in his 11 seasons at the Showgrounds, the most notable of those is current Republic of Ireland and Everton captain Seamus Coleman.

Such is the friendship between the pair, Coleman was in attendance for Gavin’s testimonial match.

In 2007 Peers gained his only international cap when he was selected for the Irish U-23’s against Slovakia, a game in which he scored in.

He was also part of the League of Ireland XI that opened the Aviva Stadium in Dublin in 2010, when the team played against a Manchester United XI.

During the 2013 FAI Cup final win over Drogheda United, Peers ruptured his cruciate ligament which would keep him out of the majority of the 2014 season.

There are very few players in the world that can say they have won every domestic title on offer.

In July 2016, Peers was granted a testimonial match against former manager Paul Cookes current side Portsmouth, a game which finished 3-3 and a game which Peers scored with his final kick of the game from the penalty spot.

Although there was a low turnout for the game, it’s one which was enjoyed by all those who were in attendance that night.

With Rovers manager Dave Robertson busy assembling his squad for the 2017 season, I was sure that Gavin would be apart of it but on the 19th November 2016, Dublin side St Patrick’s Athletic announced that Peers had signed with them for the 2017 season, bringing his career with Sligo Rovers to an end.

After 11 seasons Peers sits fifth in the all time appearances for Sligo Rovers.

At only 31, Peers has a few years left playing top level League of Ireland football. While some Sligo Rovers fans will be happy to see him go I just hope that it doesn’t come back to bite us on the arse.

In 2015 when Rovers were struggling Peers was one of the players who always gave 110% on the pitch and was instrumental in Rovers keeping their Premier Division status for the 2016 season.

His experience will prove invaluable for Liam Buckley’s St Pats side as they look to improve on their poor league finish in last season’s competition.