Get Rich or Fired Trying: The Football Manager Mercenary 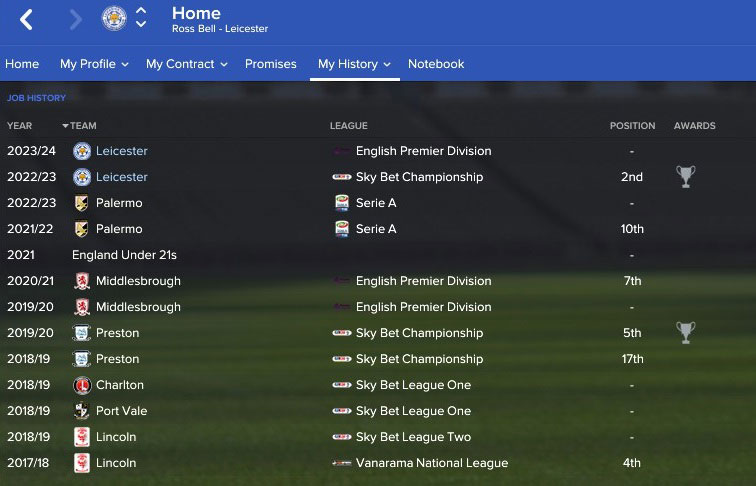 The word ‘mercenary’ — someone who is just out for themselves and their own career — is a dirty word, especially in the world of football, and no one wants to be tagged with it…

The aim of being the highest paid manager in world football is an ambitious one; it’s harder still when you start a new game unemployed and with zero coaching badges.

To make it somewhat easier, I did choose to be a former international player. 11 goals in 30 games for England (not too shabby).

Rather than bore you with post after post of the early, low paid seasons, let’s join the action in September 2023.

I’m employed as Leicester City manager having returned them to the Premier League at the first time of asking.

My current contract sees me earning the princely sum of £30k p/w – a far cry from my humble roots as Lincoln City manager back in 2017.

As you can see, I’ve been about a bit! After getting Lincoln promoted via the playoffs in my first season, League One club Port Vale offered me a deal, so off I went.

No room for sentimentality in this save. What happened next was a rash of three jobs in the same season – well, four, if you count being Lincoln boss when the 18/19 fixtures were announced.

From Port Vale, I jumped to the better paid job of Charlton Athletic. My three-month reign as Charlton manger came to an end when I took over at Preston North End. FYI, I’ve applied for all the jobs I’ve had so far in the save.

My tenure at Preston was a happy one, as well as being financially fruitful; being paid £6k per week was a far cry from just a season earlier, where I earned under a grand as Lincoln boss.

Finishing fifth in my second season as Preston boss enhanced my reputation to a level that I could get a Premier League job in the shape of Middlesbrough for the 19/20 season.

Preston may have lost in the playoff final, but having already agreed to take over Boro in the summer, the downhearted boys were no longer my concern.

My reign at Boro was short but successful, considering my resources. A 7th-placed finish and Europa league qualification through an FA Cup runners-up spot saw me apply and get the England Under 21s job.

This is the only time during the save where things proved tricky. With just a few matches a season, being a national team manager – even at U-21 level – is financially rewarding, but extremely boring.

I decided, for the first time, to accept a lower paying job, if for nothing more than to preserve my own sanity. It was off to Italy and the struggling men in pink, Palermo, working for a paltry £8k p/w. It was destined to be a short spell.

Which brings me to my current job at former Premier League champions Leicester City and a £21k p/w contract.

Languishing in 19th position when I took over, we went on an incredible run to finish second and get right back into the Prem.

As soon as promotion was achieved, I was after a new contract, and the board saw fit to offer me £30k P/W, which is where we end the first in what is hopefully going to be a long-running series.

It’s fair to say I have a long way to go.