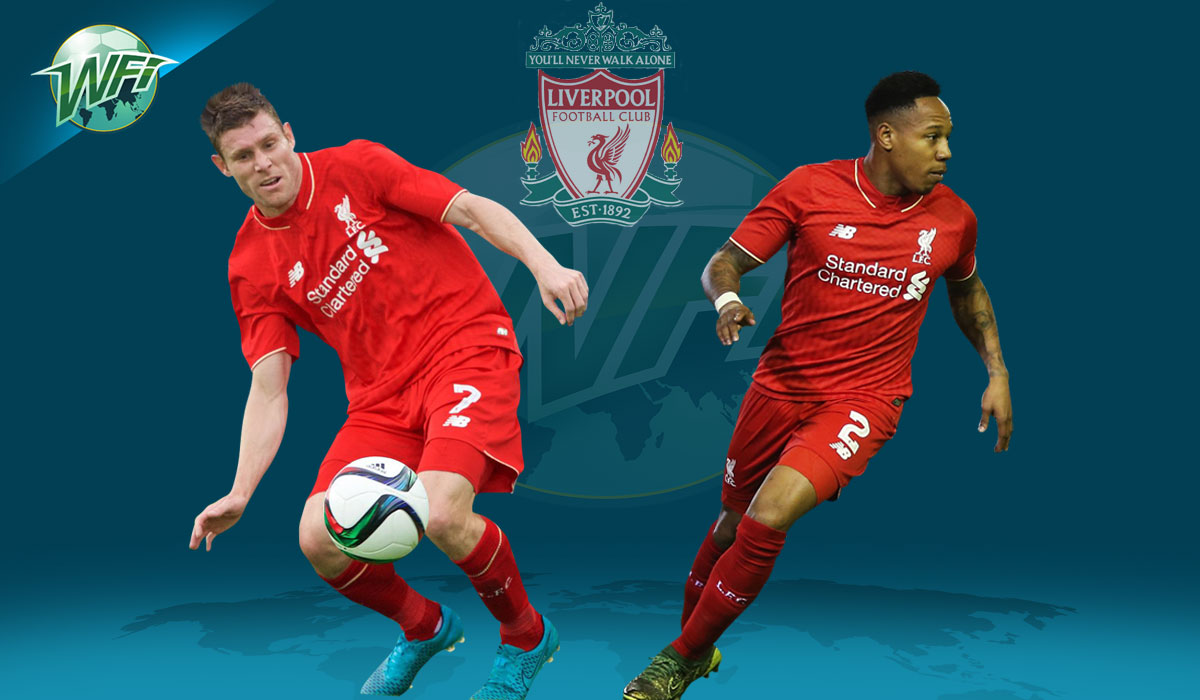 Given the squad at his disposal, Jurgen Klopp has done remarkably well to get Liverpool into the situation they currently find themselves in.

The Reds are one win away from a place in the Champions League next season and although some might be disappointed with the season post-January, the German manager has done an impressive job to guide them to being on the brink of just their second campaign in Europe’s elite competition in eight seasons.

For even more context, Liverpool are currently on 73 points, which would have resulted in them finishing second last year.

The Reds had a title challenging start to the season. After their 1-0 win over Manchester City on New Year’s Eve, Jurgen Klopp’s men had 43 points from 19 matches and were just six points behind Antonio Conte’s Chelsea.

Liverpool were averaging 2.26 points per game and on course for an 85 point season. So, they’re currently 12 points off that figure with one game left to play.

It’s not as bad as it seems you can’t help but feel it’s a missed chance for the team. Draws have just chipped away at the potential points.

They’ve drawn 10 matches this term, seven more than the champions. After all, they’ve only lost one more than Chelsea and and two more than Spurs.

Points away from home against Jose Mourinho’s Manchester United and Mauricio Pochettino’s Spurs are good results.

However, it’s the draws against the likes of West Ham United, Sunderland, Southampton and Bournemouth that are the issue. Those results are what separate a top four season with a title challenging one.

It’s no secret that the Reds struggle to break defensive teams down. The who set up with no intention to attack and simply aim to frustrate the likes of Philippe Coutinho, Sadio Mane and Roberto Firmino by dictating where they can and can’t have the ball.

Teams have had a lot of joy sitting back and defending their penalty area while watching Klopp’s men try, and fail, to unlock a well organised and extremely disciplined defence. The frustration transfers from the pitch to the fanbase.

The swashbuckling performances from earlier in the season are forgotten and in it’s place is resentment.

Why are Liverpool relying on Dejan Lovren when he’s always on error away from gifting the opposition a goal?

Why didn’t the Reds plan for Mane missing matches by signing someone similar?

Why didn’t they bulk the squad up in January when a title push was on?

Why didn’t they add a creative midfielder so they weren’t having to play Lucas?

Just a general “why”, really.

But, it was interesting to see that the issue with the full-backs and how they had an impact, or lack of one, on the Liverpool attack went under the radar for the most part.

Yes, James Milner’s frailties as a left-back became evident as the season progressed, as expected, and people got fed up with him cutting in. The goals he scored and the fact he was a grafter was enough for many to ignore the problems that persisted with him in that role.

A clinical goal scorer would have been nice as would have a reliable defender. But risk taking full-backs would’ve been a cheaper solution to a lot of the problems this season.

The Problem with Clyne and Milner

Liverpool play a narrow system with an emphasis on keeping possession. Mane and Coutinho tuck inside to make a narrow three with Firmino, and the full-backs are tasked with keeping the width.

Earlier on in the season this worked because the opposition would look to close Clyne and Milner down and there would space centrally for the attacking three plus Lallana and Gini Wijnaldum to play in.

Milner’s insistence to cut in on his right foot wasn’t an issue because he was playing incisive and decisive passes to the feet of the attackers, who were in space.

There was no need for them to get to the byline and cross the ball in because the Reds had their midfielders making runs from deep to get into those those key areas in between centre-back and full-back.

Cracks, however, began to appear when the opposition stopped engaging the full-backs. They’d stand off them, keep their shape and allow them to have time on the ball in the final third knowing full well they look to play the ball centrally.

Liverpool had been sussed out.

There was now a need for them to get to the byline, utilise that key space between centre-back and full-back, and pull the ball back into the area for attackers and the runners from midfield.

They aren’t and haven’t been doing that. For all we know this could be down to instruction from Klopp, but what’s been abundantly clear over recent weeks is that Clyne and Milner are reluctant to get in behind the opposition and stretch them. 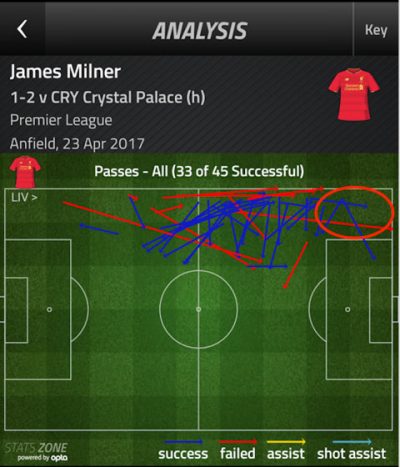 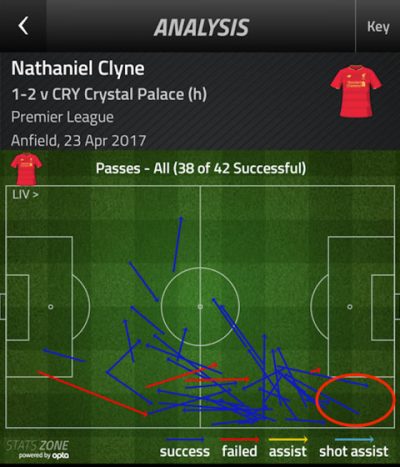 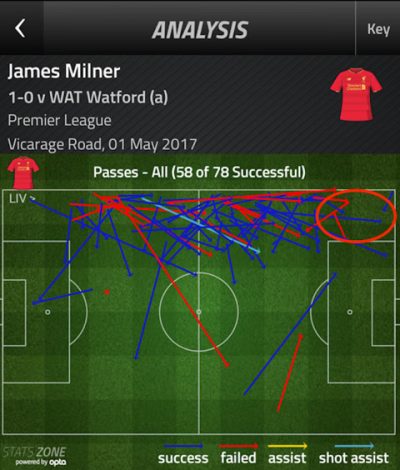 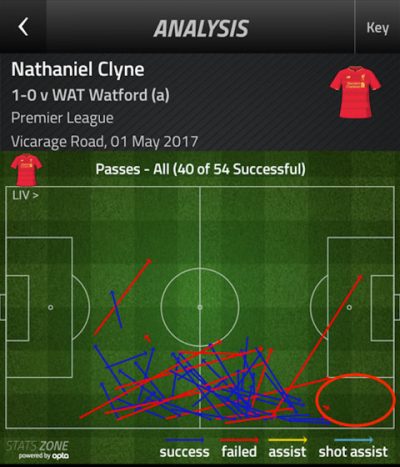 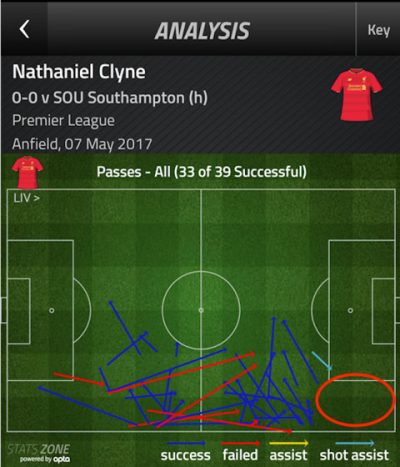 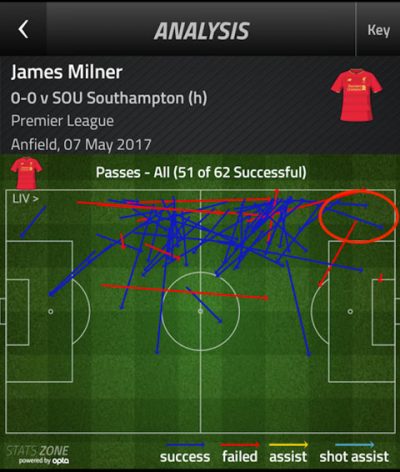 The areas circled in red are the areas you want your full-backs to be making passes in if you’re looking to stretch the opposition, which Klopp’s men should be. In matches against Watford, Southampton and Crystal Palace, Liverpool scored just the two goals and it all looked fairly straightforward for the three teams when defending.

As you can see from the pass maps above, both Clyne and Milner make very few passes in these areas. It’s like there’s a force field protecting those zones and they’re not allowed in.

Instead they pass the ball into central areas and effectively nullify themselves. The team is basically playing in front of two compact banks of four. Against Southampton it was pretty evident that the opposition didn’t view either full-back as a threat.

In the still above, Clyne (circled in red) receives the ball from Lucas. He could attempt a run down the right (shown by the white arrow), engage both the right midfielder and the right-back and perhaps win a corner, a throw in or create space for the Liverpool player positioned between the defence and the midfield.

Instead he doesn’t even contemplate making that run, he dribbles inside (highlighted by the red arrow) and plays a pass to a central area. Perfect for Saints who have two lines behind the ball and aren’t being forced to chase players in wide areas. Again it’s against Southampton. The ball is played out wide to Clyne who is in acres of space. Claude Puel’s men have nine players in a central area covering the width of the penalty box.

In an ideal world, he picks that ball up and drives into the space down the flank. It would pull the left-back over as well and the two compact lines shown above would be stretched and there would be pockets of space for those in red. It doesn’t happen though.

Clyne takes a touch, sets himself and plays a ball back into a central area to an unmarked Liverpool player.

The Reds keep possession and they have the ball in a dangerous area. But Southampton still have two lines of four and nine men behind the ball.

It’s going to take something special to create something from this position. The ball is worked to Lallana who fires in a shot. In the picture above, though, look how narrow both Southampton and Liverpool are. Look how many players the away side have behind the ball. Look how easy it is for them to manage the situation.

It may be down to Klopp’s design that the team are this narrow but that would be a bit of a head-scratcher given he wants to play his way through teams, and the only way to do that is by exploiting space with quick ball circulation. One way to increase the tempo of play would be to create pockets of space between the lines.

If the Reds are to break down teams they need to at least look as though they’re prepared to get into areas where they can stretch the opposition.

Just dribbling into those areas circled on the pass maps would stretch the opposing team more than Liverpool do at the minute.

Braver, positive and more progressive full-backs would go a long way to helping Klopp and his team counter the ultra defensive set-ups they regularly face.