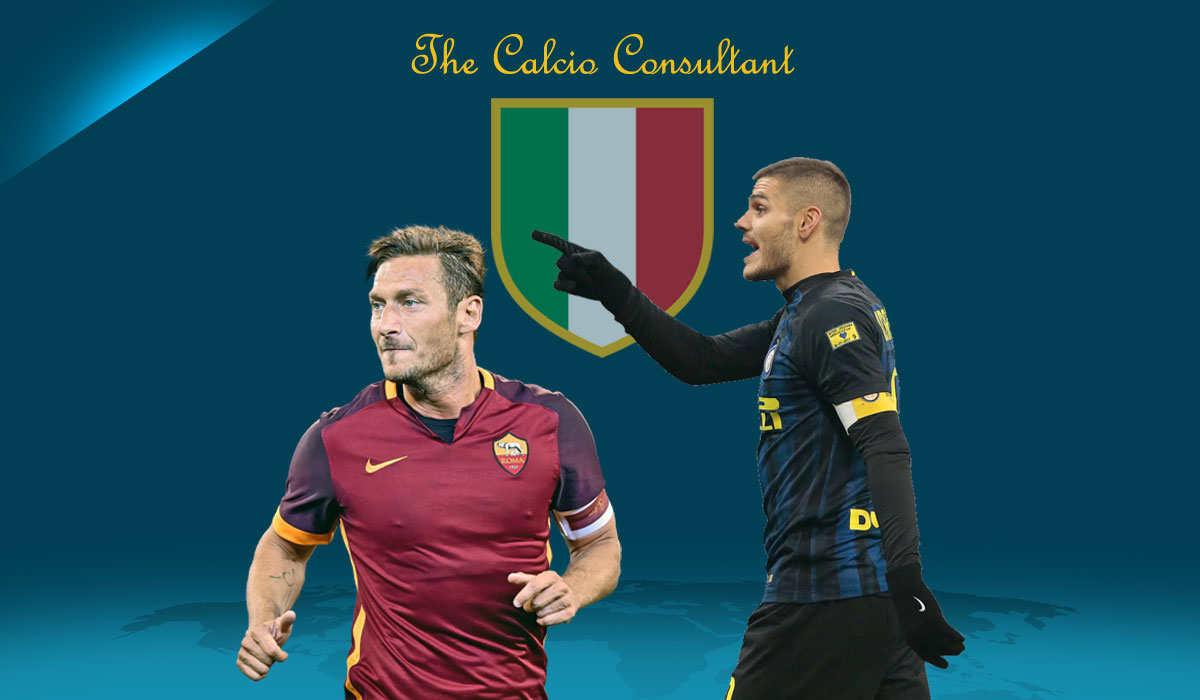 The Calcio Consultant, Frank Crivello, looks at the problems at Inter, shares his opinion on Fransesco Totti, and rounds up a few other Serie A issues.

Like the Inter Ultras at the San Siro against Sassuolo, you’ll probably organise a walk out on this blog post.

I can’t remember another team so heavily invested in, that has underachieved so badly, AND just stinks of dysfunction from the Chairman all the way down to the equipment managers. With each passing week, Inter just sink to further depths.

The “performance” against Sassuolo is just peeling the onion.

Just a few days before, Inter sacked Stefano Pioli, the man that you could say deserves credit for energising the Nerazzurri this season. And because the sacking was not disgusting enough, Inter made the announcement as Juventus were minutes from clinching their place in the Champions League final.

The old, “we announce this now, no one will notice.” Wrong. Such a decision and Inter’s timing of the announcement is all you need to know about them, a small-club mentality with money.

Before preseason of the 2017-18 campaign, Inter will have hired their fourth manager in 12 months.

Whoever wants to walk into this house of cards and into the hot seat will be the tenth since Jose Mourinho won the treble back in 2010.

4 managers in 12 months, 10 in 7 years. We should look into whether or not Palermo’s Maurizio Zamparini is a silent partner in the Suning Group.  If he’s not, he’s at least blushing at what’s going on at the blue side of Milan.

I don’t want to speculate who will be the next manager at Inter, but if you believe the rumours they are shooting for the stars as Antonio Conte, Diego Simeone, and Mauricio Pochettino have all been linked.

They are ready to offer a king’s ransom for the right manager’s services, if I’m any manager’s agent though, I’m negotiating a very fat buyout for my client.  No one with a shred of intelligence is associating Inter manager with job security.

And what about the players?  Could this be the equation when you get when you throw money at anything and put the captain’s armband on a player whose maturity level is that of a pre-teenager (and pre-teenagers could take offence to this!)?

In Mauro Icardi’s defence though, he seems to be the only player on the pitch that cares.

And I’m not ranting about Inter and pointing at them, laughing because I’m a Milan fan. I’m an Italian Football fan, and when teams like Inter are at the top of their game, it makes Serie A all the more compelling.

They are a small club with money and have a long way to go to shed that reputation, regardless of their table finish this season.

Okay, so technically there is still a title race

Juventus’ lineup for Sunday’s game at the Olimpico at Roma was an obvious suggestion that Max Allegri is in Coppa Italia mode, knowing that even with a loss there are only three points needed in the last two matches to lock up the Scudetto.

I think he could’ve closed the league out at Roma with what he put out there.

He only needed one of his men to say something mean about one of the Roma players and that would have broken the fragile mentality of the Giallorossi across all eleven players.

Instead, the champions-elect left their hosts in the game. I’ll be the one to say I’m disappointed that it’s taking the Old Lady so long to clinch this thing.

Though credit to Roma for keeping the door ever so slightly open, however………

All this so a middle-aged man can feed a mid-life crisis?  Really?

I’m actually quite surprised and find it amusing that there is a legion of Roma supporters throwing tomatoes at Luciano Spaletti. All because Francesco Totti is not getting the run they think he deserves.

Those of you Roma fans who are pro-Totti, allow me to let you in on something you may not be aware of…….

FRANCESCO TOTTI IS 40 YEARS OLD AND IS PAST WHAT HE WAS ABLE TO GIVE!!!!!!

Sorry to everyone else, I had to shout that.

The pro-Totti crowd were strongly dissatisfied that their man’s run-out against Juventus was just a handful of minutes. In fact, they have not been happy with any run-out of any kind that Totti has gotten.

To them this season should be about giving Francesco Totti all the playing time his geriatric legs can handle, and to hell with actually achieving anything.

So who else to lay their frustration on but the manager?  Everyone but the pro-Totti crowd, cover your ears………

LUCIANO SPALETTI’S JOB AS MANAGER IS TO WIN GAMES!  NOT CATER TO A SENTIMENTAL NARRATIVE!

Seriously, the Totti-ites would seemingly be willing to sacrifice automatic qualification for the Champions League and a (unrealistic) late Scudetto push so their icon can get on the pitch.

The fact is he’s removed from that.  Very.  Far.  Removed.

Sometimes you just need to take the toy away. It worked out okay for Chelsea this season when Antonio Conte decided that their legend, John Terry, couldn’t cut it.

In their delusion, Totti-ites are losing sight of the fact that Roma could finish the season on 87 points, their best single season total and would be a Scudetto winner in many other seasons.

Further, I don’t think they realize that Roma’s best striker is two games away from winning Capocannoniere.

Explain to me how Spaletti is supposed to give all that up so an old man can play.

Explain to me that dropping to the Champions League playoff is acceptable so Totti can have a bigger runout, and I’ll show you footage of last year’s disaster against FC Porto.

Totti-ites. Hang in there. The season ending match is home against Genoa. They stopped caring three months ago.

Totti will probably start, and be substituted at a reasonable point in the match, and you can salute your icon then. Until then, get behind Spaletti and see out the automatic Champions League place.

There’s a Spaniard in Manchester who watched this match, pointed at the television, and shouted “HA!”

I didn’t do the research on this, but I can’t think of another team that will finish in the top half of any major European league that has conceded more goals than Torino.

Through 36 games they’ve allowed 61.  To put that in perspective; the relegation strugglers and their goals conceded are Genoa (60), Empoli (58), and Crotone (54).

Two things come to mind when I see this.

1) Sinisa Mihajlovic might regret the falling out with Nikola Maksimovic.

Though Cagliari, who have allowed 69 goals, have a shot at finishing top half too.

Just some things that I don’t have big takes on but want to point out.

I enjoyed writing this particular blog.  It was as effortless as it was for Leonardo Spinazzola to run past Juraj Kucka playing wing back.