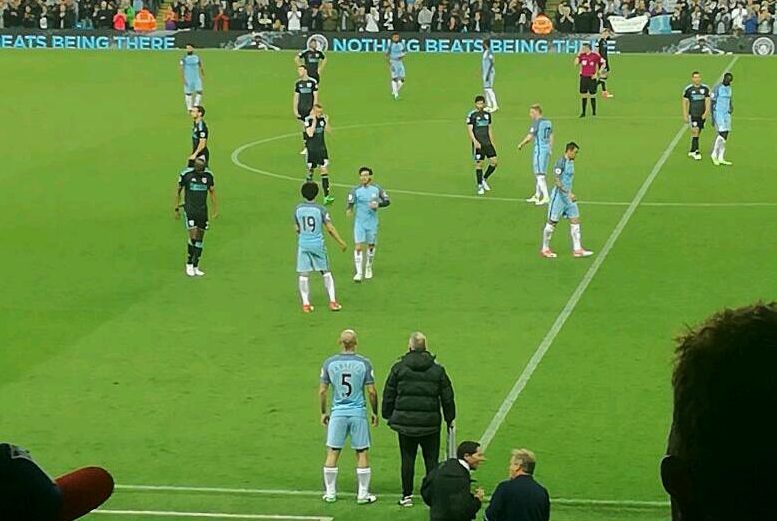 It was a dull, grey day in Manchester, but Pep Guardiola’s stars were able to brighten up the blue half of the city with a performance which sees them all but qualify for next season’s Champions League.

They were led by their now elder statesmen Sergio Aguero, who will be 29 next month, and captain Vincent Kompany for whom age is a distraction but being injury free is priceless.

Another leader, Pablo Zabaleta, began his last outing at the Etihad on the bench, watching on as future legends Gabriel Jesus and Leroy Sane caused havoc for this uncharacteristically soft Tony Pulis side. It was only a matter of minutes before Jesus was showing why Guardiola has instant faith in him.

The Brazilian tracked back from his position on the right wing to win the ball from Jake Livermore in midfield.

While Jesus’ attacking skills and goal scoring feats will catch the eye, his work off the ball is the reason he’s walked straight into this side.

Sane was just as bright on the opposite wing, and Baggies right back Allan Nyom was lucky not to concede a penalty after tangling with the German in the box.

It was a sign of things to come and the home side’s attack in the early stages was relentless.

The first shot on goal came from one of the old guard, when Aleksandar Kolarov forced Ben Foster to save his well hit left-footed free kick from 25 yards out.

The Serbian had a second effort shortly after, and just as his attempt was drifting embarrassingly off target Aguero got a touch which almost found the net. Almost.

Sane should have opened the scoring shortly after when he was sent through by the Argentinian striker, but he dragged his shot wide.

More pressure from City, and it would soon lead to goals. Plural.

Yaya Toure surveyed the field before passing low and hard in Aguero’s direction, and the number 10 used his skill and vision to flick the ball through the defender’s legs into the path of Kevin De Bruyne.

The Belgian bustled his way through the penalty area before finding Jesus who was lurking with intent at the far post for a tap-in.

One became two within minutes and Aguero was involved again, playing in a role more akin to his shirt number than that of an out-and-out striker.

This time he looked for Jesus, but the ball bobbled out of the Brazilian’s control under heavy pressure from Marc Wilson.

Unfortunately for West Brom it fell in the direction of De Bruyne who let rip a supreme first-time shot which rendered Foster motionless.

Meanwhile, on the bench, with his team in the driving seat Zabaleta was already thinking about his his late cameo…

Pulis sent his side out early for the second half. Either that or the players managed to escape the wrath of their manager who can’t have been pleased with their abject showing in the first period.

And they weren’t much better in the second. It took just over ten minutes for Aguero to work his magic again, this time setting up the unstoppable Toure who ploughed through the opposition defence to finish with the coolness of a seasoned striker.

The Ivorian is just good at football.

At the back Kompany kept out anything West Brom had to throw at him, doing the work of an entire back four to silence the considerable threat of Salomon Rondon.

The captain got some help when, in the 62nd minute, Zabaleta finally entered the fray, replacing the unusually not-mentioned-in-match-report-yet David Silva.

Eastlands was buzzing with vocal tributes to the right back who was cheered every time he touched the ball.

“Pablo Zabaleta, the city is yours” sang the fans as they ran through a medley of Zaba hits, while at the other end his Argentine compatriot looked to get the goal his performance had deserved.

Aguero continued his ingenious play, and on one occasion he knocked a ball through to Sane with his shoulder, and consistently troubled the opposition defence.

But it was West Brom’s centre forward who managed to get on the scoresheet.

Annoyingly wearing the number four shirt, Hal Robson-Kanu had replaced Rondon among the Zabaleta party without anyone noticing, and nipped in for a consolation goal in the final minutes.

It didn’t matter though.

Zabaleta was named man of the match by the stadium announcer, and the celebrations continued into the night, inside and outside the stadium.