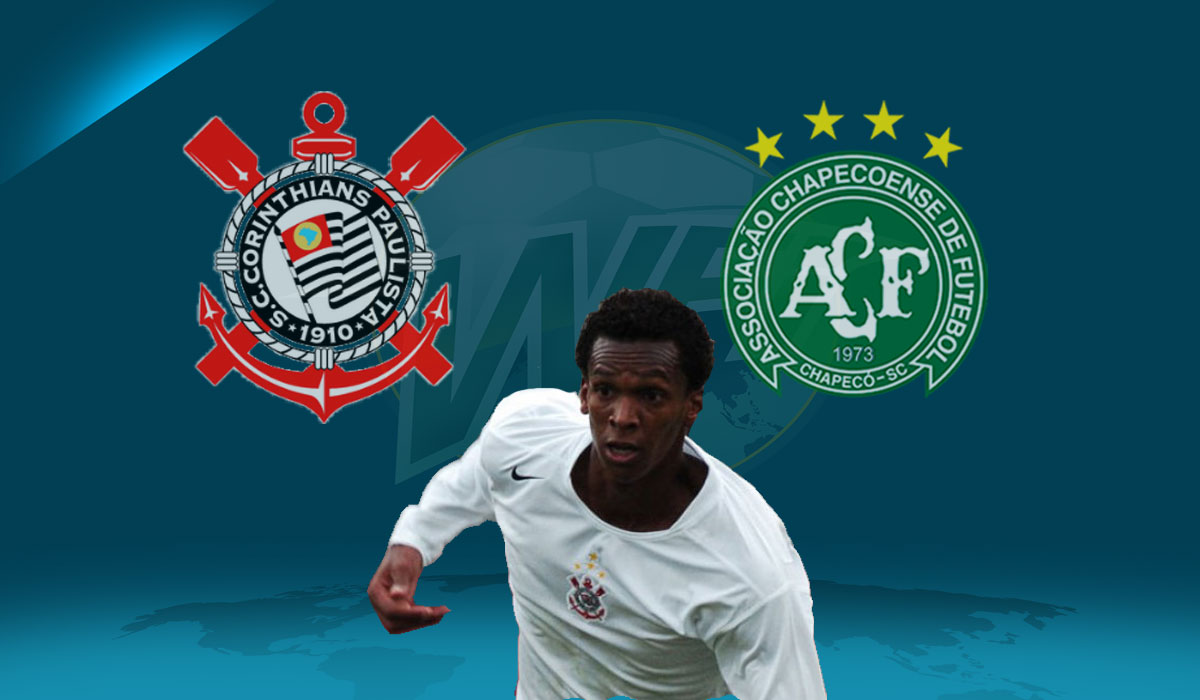 By Tom Sanderson at Arena Corinthians

The second fixture of the Brasileirao’s opening weekend saw Corinthians receive Chapecoense; two teams who, with respect to continental competitions, find themselves in reverse fortunes compared to this time last year.

Then, the São Paulo giants were the defending domestic champions contesting the Libertadores and Chape were embarking on a fairy tale journey in the Sudamericana that was to have a tragic ending, commemorated here tonight by over 31,000 spectators in attendance.

Before kick-off, a balmy Saturday evening warmed further with a touching tribute marked by Corinthianos holding up banners reading “Eternally in Our Hearts” that almost gave Chape the feeling of a home fixture.

This was nearly concluded by Rossi putting the visitors up after a few minutes with a shot that dragged past Cassio and dinked his far post.

It was to be Corinthians who would play to the crowd however, racing out of the tracks as Chape struggled to shake off a hangover from their 4-1 drubbing to Colombia’s Atletico Nacional on Wednesday night in the South American equivalent of the UEFA Super Cup, the Recopa.

Crowned honorary champions of the Sudamericana in wake of the tragic plane crash that claimed most of its squad and backroom staff, they had flown straight in from Medellin to São Paulo without much rest and it showed.

In the opening 20 minutes, Corinthians’ prodigal son trio of Jô, Jadson and Rodriguinho, recently returning from China and the Middle East and joined by now cemented starter Angel Romero of Paraguay, were an attacking threat from the outset.

Rodriguinho has been teasingly compared to Andres Iniesta as of late thanks to his heroics in this year’s successful São Paulo state championship plus the two players’ similar build and receding hairlines.

On 21 minutes he received a pass from right back Fagner at the edge of the box that he masterfully threaded through to Jô.

The ex-City man dragged the ball round a defender on to his right foot with his back half turned and sent Corinthianos into raptures with a close range chip over the grounded keeper’s shoulder.

For the remaining portion of the first half, Corinthians rested on their laurels after a Rodriguinho shot from long distance was too wide to make it 2-0, and Chape tired further.

In the second half though, Chape, crowned champions of their home state of Santa Catarina, came out with a refreshed vigour.

It was Corinthians — exhibiting the same sort of waning concentration — that saw them knocked out of the Copa do Brasil to Internacional in this same ground, and let Universidad de Chile back into their Sudamericana second leg midweek, albeit with less consequence due to nursing a considerable aggregate lead – who were firmly on the back foot.

The pressure proved too much. After eleven minutes of recommenced action, an excellently-whipped in cross from the right wing by Rossi saw Arthur tower over Fagner and knock him to the ground, hitting the underside of the bar before Wellington Paulista half-volleyed the rebound in.

Five minutes later, Fagner’s misery was compounded by picking up a yellow card, and Corinthians continued to hound the referee in frustration as decisions went against them.

Their fans aimed at the official and his mother an array of unrepeatable slurs.

Noticing a lull in creativity after Girotto came close to putting Chape 2-1 up by skimming the post with a headed effort, Corinthians coach Fabio Carille made two substitutions. He took Romero off for Léo Santos and Gabriel for former Sheffield United forward Colin Kazim-Richards.

Nothing could help the hosts though and going into the last ten minutes of the game, further despair came via a string of misplaced passes and a lack of communication.

Minutes from time, Jô was among the few pushing the issue but his attempts could do little but meet Jandrei’s grasp comfortably.

In the end, the tie would finish in the same manner as when these two teams met in São Paulo in October last year – 1-1 with the points shared and Corinthians having thrown away the lead.

This weekend, Corinthians head to Bahia to face Victoria whilst their bitter rivals and champions Palmeiras will be received by Chape.