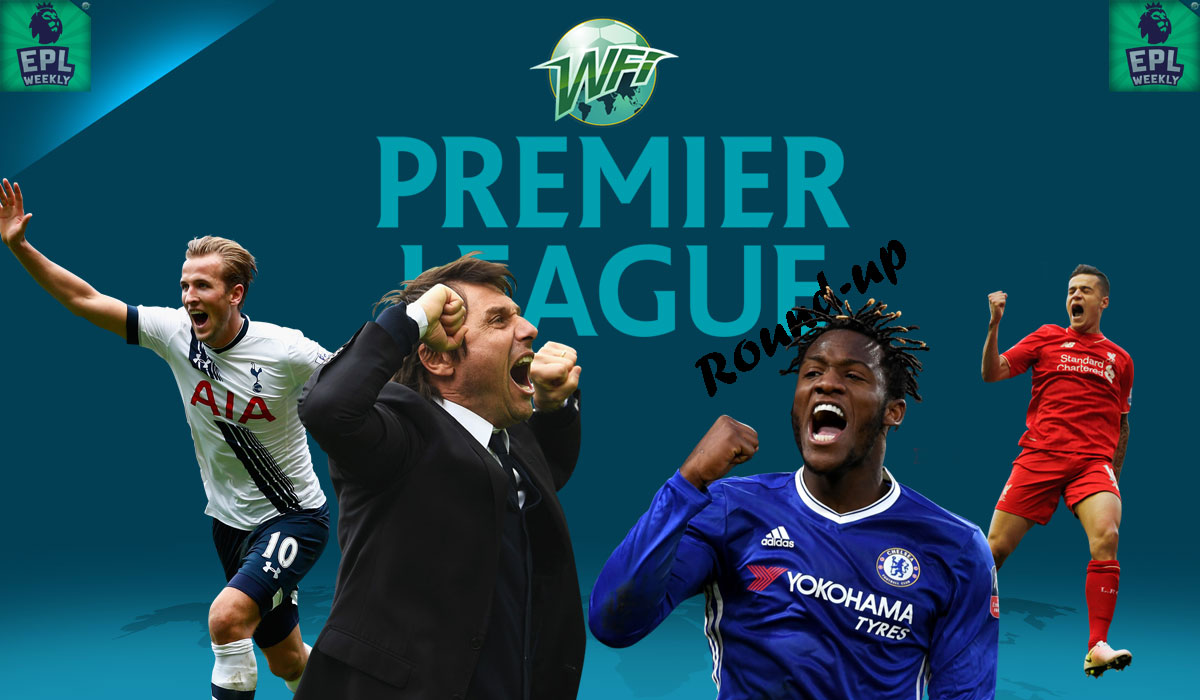 So that’s that, then.

The scorer was none other than Michy Batshuayi, a man who has won more retweets than Premier League games this season.

The Belgian has been linked with a move away from Stamford Bridge all year, but it was he who popped up with eight minutes left, bringing his league goals tally to a truly astonishing two.

That’ll be a paltry 16.5 million per strike, then.

Chelsea’s FA Cup final opponents had their own cause for celebration on Saturday, Arsène Wenger’s snowflakes blasting 4 past a decrepit Stoke City.

The game was marred by another pathetic plane protest, but the hubbub didn’t distract Olivier Giroud, whose double reinforced his position as perhaps the League’s most underrated striker.

Even Alexis Sánchez and Mesut Ozil got in the on the act, the former putting his negotiations with Bayern Munch on hold to wallop in his 24th of the season.

Sánchez is the first player in the League to reach double figures in both goals and assists this year, a fact that speaks more about his contemporaries than it does of his undoubted quality.

In the northeast, another Latin forward was busy banging them in, Fernando Llorente rubbing salt into Sunderland’s fetid wounds at the Stadium of Light.

Paul Clement has done a fair job this year, but he has the quite frankly beautiful Spaniard to thank for his continuing tenancy at the Liberty Stadium.

Swansea’s iron-headed lothario is just too good looking for the rough and tumble in the Championship.

The same might have been said of Hull City’s Marco Silva, but even his chiselled features weren’t enough to distract a Crystal Palace side suddenly possessed of its goalscoring boots on Sunday.

Until now, Fans of Serie A had been scratching their head up at Andrea Ranocchia’s decent performances, but normal service was resumed here, the Italian’s shocking error letting Wilfred Zaha in for a slotted finish after just two minutes.

After Christian Benteke powered in the second from a corner, Hull’s short stay in the Premier League was over.

It hasn’t all been bad, though. Marco Silva will surely walk into a job elsewhere in the Summer, whilst Lazar Marković has shown flashes of the brilliance that convinced Brendan Rodgers to shell out millions for him from Benfica.

Unfortunately for Hull fans, however, the odds of either moving to the Championship appear very slim indeed.

Liverpool added another 4 goals to their haul on Sunday, powering past an inept West Ham side at the Olympic Stadium.

Daniel Sturridge has seemed loathe to play all year, but it was his first goal since January that set the tone on 35 minutes, before Phil Coutinho’s double sent Barcelona fans swooning.

The Brazilian continues to be linked with a move away from Anfield, but after Divock Origi added a fourth, Liverpool look odds-on to finish a more-than-respectable third. Right now, it looks like the only way they can hang on to their impish Brazilian wundertalent.

West Ham, meanwhile, continue to frustrate. After ruining the Tottenham party last weekend, the Hammers looked bereft of ideas against a Liverpool side full of pomp and malice.

They’ve now suffered eight home defeat in the league – that’s five more than at Upton Park last year. Slaven Bilić looked exhausted after the game, admitting that it had been a “very long” year.

Don’t worry Slaven, you might not be around to endure it for much longer.

Another manager playing for his future was Craig Shakespeare, as his Leicester side visited Pep Guardiola’s Manchester City at Eastlands.

Despite arresting his team’s chronic slide into the relegation places, the sense remains that Shakespeare’s place at the club is less than secure. David Silva didn’t do him any favours, the Most Underrated Player in the League ™ turning in a Leroy Sané effort on the half hour mark.

When he isn’t careening around the Trafford Centre on a mobility scooter, Gabriel Jesus has been sensational for the Sky Blues, and it was his penalty that looked to have secured the points.

Shinji Okazaki had other ideas. The Japanese has done much to shatter the ‘technically good but lightweight’ stereotype suffered by Asian players, and he was at it again on Sunday, battering in a Marc Albrighton cross just before half time.

In truth, Leicester deserved at least a point from the game, but Riyad Mahrez’s comically mistaken penalty was the closest they came to restoring parity.

The calamitous spotkick is a perfect microcosm for the Algerian’s season, but there is one positive – with his asking price suitably reduced, he may find an exit from the King Power all the more achievable this Summer.

Things were much more sedate on the South Coast, as Bournemouth and Burnley played out an almost gentlemanly encounter at the Vitality Stadium.

With both sides having secured their Premier League status, the Lancastrians were almost apathetic when Junior Stanislas slotted the opener on 25 minutes.

Eddie Howe continues to attract the plaudits, but he has a lot to thank Josh King for, the Norwegian on hand once again to score the second.

No other player in the league has brought his side more points than the striker, and it is no surprise that he continues to be linked with a move away from the Cherries.

If you’re forgetting that there was another game played on Saturday, then I don’t blame you. Middlesbrough and Southampton have been the Premier League’s ‘grey men’ all year, and the game at the Riverside was a suitable end to a whimpering year for both teams.

Jay Rodriguez looked the only one bothered when he scored the opener on 42 minutes, before Nathan Redmond stitched an effort into the top corner on the hour mark.

That Patrick Bamford went on to score his first Middlesbrough goal since 2015 really said it all.

Where else then, could this summary end other than at White Hart Lane, with Spurs entertaining Manchester United for the last ever game at their famous old stadium.

In an afternoon rapt with emotion, the game almost seemed a sideshow, but Victor Wanyama popped the nostalgia after just 6 minutes with a cursory header.

When Harry Kane flicked in a second after half time, the game was effectively over.

Wayne Rooney managed to reply on 71 minutes, but by then attentions had focused to the closing of a stadium that had housed some of best football in England for over a century.

As an orchestra played ‘Glory Glory Tottenham Hotspur’ in the lashing rain, memories of Hoddle and Klinsmann danced around the famous old pillars.

All Spurs fans, however, can look forward to the brightest period in their history.

The game may have had the sense of an ending, but equally tangible was the perception that this was the beginning of something very special in the white half of North London.

And that is something truly worth celebrating.