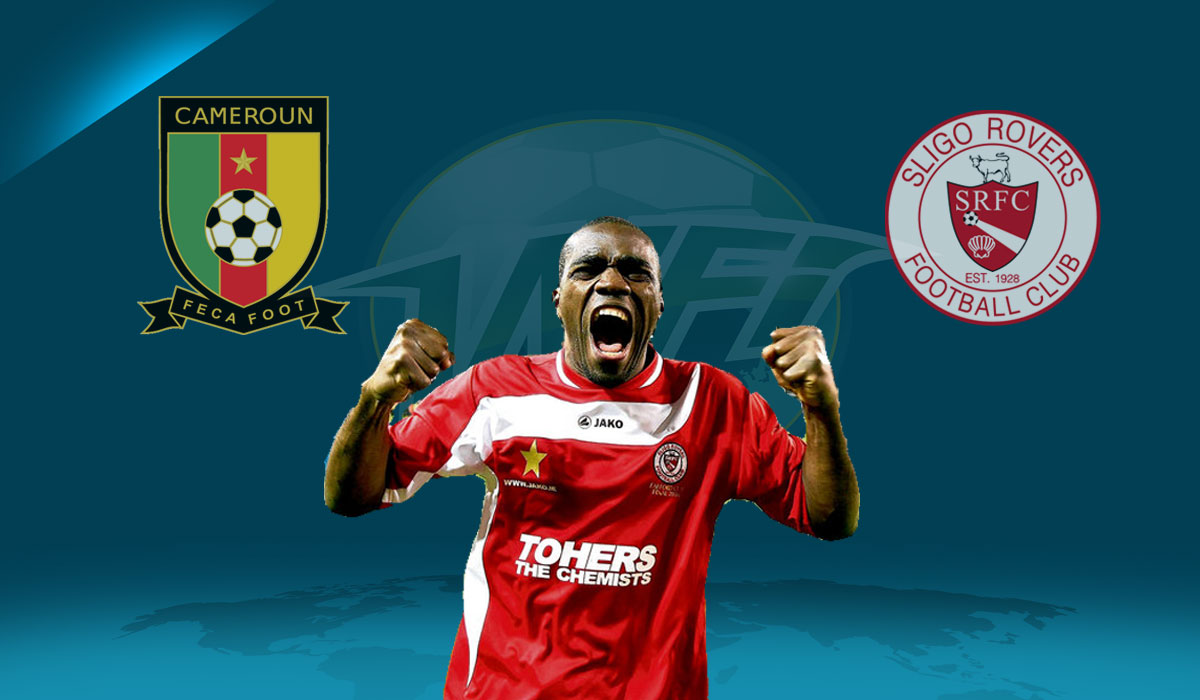 “an extremely famous or notorious person, especially in a particular field.”

“the man was a living legend”

All football fans think certain players are legends: the players they flock to see on a weekly basis; the ones that make them hang around after a match, hoping for a photo or an autograph.

Little did the fans know that, by the time he played his final game for the club in 2014, he would be considered a legend.

N’Do joined the Rovers during the club’s best ever spell in the League of Ireland.

Beyond the trophies, he was simply one of those players that you cannot help but fall in love with.

His silky skills, his eye for a pass – which he provided in the 2013 FAI Cup final when he set up Danny North to help Rovers beat Drogheda 3-2 – his eye for goal, and the constant smile on his face — something you do not see a lot of with today’s footballers.

N’Do started his career in Cameroon in 1995, playing for Canon Yaoudé before moving to Coton Sport two years later, where he won his first major trophy, the Elite One league, in 1998.

A move to Europe quickly followed, and in 1998, N’Do signed for Swiss club Neuchâtel Xamax, where he spent one year before moving on to Racing Club Strasbourg in France.

While at Strasbourg, N’Do helped the team win the Coupe de France before they were ultimately relegated to the second tier of French football.

Internationally, N’Do won twenty-one caps for Cameroon, and he was selected for the 1998 and 2002 World Cups, playing three games in the former and remaining on the bench for the latter.

He was also part of the Cameroon team that won the Africa Cup of Nations in 2002, which was the last year he would appear for the Indomitable Lions.

Between 2001 and 2003, N’Do played in various clubs around Asia, but it was in 2003 when he was to find his home away from home, in Ireland, firstly signing with Dublin side St Patrick’s Athletic.

As with a lot of League of Ireland players, N’Do was what you might call a bit of a journeyman.

He played for some of Ireland’s most prestigious clubs, including Shelbourne, Bohemians and Shamrock Rovers, but it was with Sligo Rovers that he really found his home.

He went on to win his final League of Ireland title with Sligo Rovers, as they beat St Pats 2-1 to secure the club’s first Premier Division title in over sixty years.

When N’Do left the Bit O’Red in July 2014, a lot of fans were disappointed to see him go — in his four years at the club, he had become one of their own; a Sligo man in all but birth.

A spell with Limerick FC followed his departure from Rovers in a player-coach capacity.

N’Do retired from League of Ireland football in 2015 and joined non-league side Arrow Harps as player-manager, but it wasn’t long before he was lured back to the Showgrounds, as on the 9th of April 2015, alongside Gavin Dykes, he was named as Sligo Rovers’ joint-caretaker coach after Owen Heary’s dismissal.

N’Do remained in that position until the summer of 2015, when he was replaced by Micky Adams and Alan Rogers as he did not have the required UEFA coaching badges to continue on as Rovers manager.

Now 41, he has most recently played non-league Achill Rovers, where he’s also done some coaching.

N’Do is one of those players that rival fans bore no animosity towards.

Wherever he went, he was well received by fans, until he scored against them.

His effort and work-rate at all the League of Ireland clubs he played for was respected by those who watched him, and as a player he was hard to replace.

Such was N’Do’s influence on the pitch, the clubs he won league titles with have all failed to repeat the feat in his absence.

He is, by all accounts, a living legend.