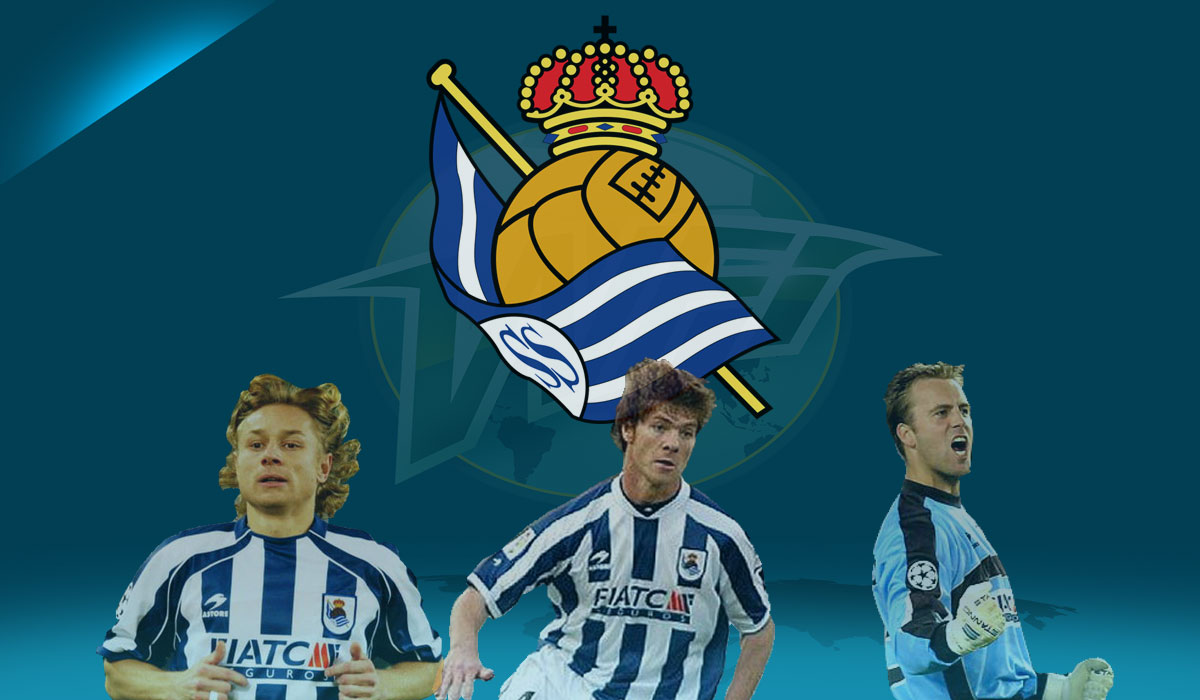 One minute is all it took.

After a searing World Cup win with Brazil, Ronaldo had signed for Real Madrid in the summer of 2002, becoming the third lieutenant of Florentino Pérez’s Galacticos pipe-dream.

When the gap-toothed wonder buried a cross sixty-one seconds into his debut, most pundits were already fearing the worst — it may only have been September, but the title would be heading to the Santiago Bernabéu in May.

Not for the first time, however, the pundits would be (almost) wrong. Three hundred miles to the North in the Bay of Biscay, Real Sociedad were quietly preparing for their greatest season in almost thirty years.

Led by their studious French coach Raynald Denoueix, the Txiri-Urdin would push Madrid all the way that year, wowing all comers with their rampant attacking football before falling short on the final day of the season.

What happened, then, to the men who nearly toppled the Galacticos before they had even begun?

After an erratic spell at Liverpool under Gérard Houllier, John Toshack splashed out on the square-headed Dutchman in the Summer of 2001.

At Anoeta, he would show the best form of his career, making an array of outstanding saves in games against Real Madrid and Barcelona in particular.

After four years in Spain, Westerveld left for unassuming spells with Portsmouth, Almería and Monza, even going on an emergency loan to Everton before retiring with Ajax Cape Town in South Africa.

In 2016, he was named in the Panama Papers alongside a clutch of his Real Sociedad teammates. It didn’t stop him, however, from becoming a player agent in his native Holland, following a short stint as a goalkeeping coach in Cape Town.

Few players could cross a ball like the Sociedad left back, who spent eleven years ravaging down the touchline in San Sebastián.

He was an undisputed starter in 2003, even providing a devastating assist against Real Madrid in April in a stunning 4-2 victory.

After departing the club in 2004, Aranzábal joined Agapito Iglesias’ revolution in Zaragoza, teaming up with Pablo Aimar and the Milito brothers for a sixth-placed finish in La Liga. It wouldn’t last though, with the defender joining the exodus three years later to sign with Canarian amateurs CD Vera.

After playing briefly for Hong Kong side Kitchee in 2010, Aranzábal retired with almost 400 club appearances and 28 caps for Spain.

He completed a course as a Sporting Director in 2013, but hasn’t yet made the move into an official club role.

‘The Bomb’, as he was christened by La Real fans, would spend a decade at the club, making 316 appearances en route to becoming a club legend.

The Basque was captain in 2003; a consistent and tenacious right back whose fortitude gilded the team of artisans marauding further forward.

After brief spells with Almería and Eíbar, Rekarte retired in 2009 aged 33, before opening a hotel in Mondragón and devoting himself to his children.

More recently, he has taken tentative steps towards a career in coaching, admitting in an interview last year that he would love to coach his beloved club in the future.

Only Westerveld made more appearances than Igor Jauregi in 2003.

A squad player who graduated to the first team before giving a number of commanding performances at centre-back, Jauregi wasn’t particularly strong or mobile, but his loyalty and commitment made him a favourite of the Anoeta faithful, who anointed him as a club legend before he retired in 2007.

On his retirement, Jauregi studied Psychology at the University of the Basque Country, before specialising in Gestalt therapy.

Perhaps inevitably, he was hired by Eíbar in 2014 to help coach the club’s younger players, using the experience of his career and academic know-how to shape the next generation.

After winning the title with Deportivo in 2000, Gabriel Schürrer decamped for an easy life in the Canaries with U.D Las Palmas.

A boxy defender with a tough tackle, the Argentine’s performances on the island convinced Real Sociedad into a transfer in 2002. He wouldn’t let them down, adding grit to Jauregi’s guile as they locked out most of La Liga’s striking talent.

Two commendable seasons in the Real shirt were followed by a title-winning stay at Olympiacos, before retiring in mid-table with Málaga in 2007.

Coaching was a natural progression for a man whose leadership skills had appointed him Lanús captain when he was just nineteen, and it was at the Buenos Aires club that he would stay as manager for two years, before being usurped by Guillermo Barros Schelotto in 2012.

At the turn of the century, no winger was better than the Logroño native, whose relative lack of pace was mitigated by an unerring technique and clinical timing. He reached a devastating peak in 2003, his delivery from the left able to scythe through even the most well-drilled defences.

From that peak, however, came a devastating fall.

After joining Blackburn Rovers for an ignominious spell in 2004, an unfit De Pedro joined Perugia a year later, again failing to make the grade in Italy. IFK Goteborg offered an escape, but again his nightmare would continue, having been sent off 3 minutes into his debut before leaving Sweden for ‘personal reasons’.

He retired in 2007, with nearly sixty goals and an appearance at the 2002 World Cup under his belt.

More recently, he has appeared as a commentator on Basque television, and can be found playing regularly in amateur football tournaments in Spain.

Everybody knows how this story goes, but back in 2003, Xabi Alonso was a baby-faced magus with a raft of potential and a lot to prove.

The son of Real icon Perico Alonso, Xabi and his brother Mikel faced the weight of expectation on their arrival at Anoeta, but by the time the younger brother smashed in from twenty-five yards against Real Madrid in April 2003, the family legacy was safe.

Xabi stayed in Donostia until 2004, whereupon he signed for Rafa Benítez’s Liverpool to become one of the Premier League’s most complete midfielders.

Despite scoring the third goal in Liverpool’s astonishing Champions League triumph that year in Istanbul, he was let go by the club in 2009, joining José Mourinho’s crusade against Barcelona in La Liga.

After winning the Champions League in 2014, Alonso finished his career with the most glorious of Indian Summers, joining Bayern Munich and helping them to three consecutive Bundesliga titles.

He retired this year as one of Europe’s most loved and revered players.

Mikel Aranburu dedicated his entire career to Real Sociedad, spending over 400 games and almost two decades at the club he was born just 40 minutes down the road from.

It was in 2003, however, where he came closest to delivering top-level silverware to San Sebastián.

Aranburu stayed with the club even through the hard times, being relegated in 2010 before dragging his teammates back to La Liga at the first time of asking.

He retired in 2012 as a bona fide Real icon, being given a guard of honour at Anoeta alongside his wife and young child as the stadium burst into emotional applause.

A Spanish journalist once said Valery Karpin was so good that he could make a decent team out of a bunch of ‘teletubbies’. Whilst that may be a disservice to his Sociedad teammates, Karpin was nevertheless an icon in La Liga by the time he signed for La Real in the Summer of 2002.

After lighting up Spain’s west coast with compatriot Aleksandr Mostovoi in Vigo, Karpin made Anoeta’s right touchline his own, his tireless running and pinpoint delivery proving a muscular threat on the wing.

After retiring with the Basques in 2007, Karpin became technical director at Spartak Moscow in 2008, before replacing Michael Laudrup as coach a year later. His spell on the other side of the touchline has proven largely fruitless, the former player resigning once and being sacked another time during two separate spells as Spartak coach.

In 2015, he came the manager of second division side FC Armavir, before helping them to a cursory relegation.

Perhaps wisely, he moved into television a year later, and became the editor-in-chief of Gazprom’s football channel Match TV in February.

John Toshack has never received the credit that his career in football deserves — one of his more astute decisions was the signing of Nihat Kahveci in 2002, a player to whom he had given a debut whilst coach of Beşiktaş in 1997.

Quite simply, Nihat was a revelation in 2003, scoring a hatful of goals as his quick and incisive movement wrought panic amidst La Liga defences.

After gaining a reputation as one of the most strident attackers in Europe, Nihat departed for Villarreal in 2006, helping the Valencians to a Champions League semi-final in his first season.

After three injury-stricken years, however, he returned home to Beşiktaş, retiring in 2011 with more than a passing regret about what could have been.

Upon his retirement, Nihat returned to Villarreal as a coach in 2012, lasting just a year before announcing his resignation on Twitter. More recently, he was an assistant to Fatih Terim during Turkey’s ill-fated campaign at the European championships last summer.

The ‘little-and-large’ combination is one of football’s most wizened clichés, but in 2003, this footballing axiom was brought vividly to life with Nihat’s partnership with Darko Kovačević.

The brusque Serbian was the strength to Turks’ speed, a muscular yin to an impish yang.

At times, the pair seemed embroiled in a personal competition for the Pichichi, and their on-field chemistry is still remembered through glazed eyes in San Sebastián, with fans looking back fondly at Golacevic’s golden spell.

Kovačević had already starred for Sociedad in 1996, when his strength and powerful shot caught the attention of Serie A giants Juventus.

Returning to Spain via a brief sojourn with Lazio in 2001, Kovacevic would stay with La Real for a further six seasons before another goal-laden stay with Greek champions Olympiacos.

Retiring in 2009, the erudite Serb became a newspaper columnist in Greece, before being appointed Chief Scout for the Pirean club in 2010.

Fans of Nottingham Forest may soon become acquainted with a player whose last stay in England with Sheffield Wednesday proved short and not particularly sweet: the club’s new owner, Evangelos Marinakis, enjoyed a productive relationship with Kovačević at Olympiakos.

Forest fans would be forgiven for wishing that Kovačević, with a career total of over 200 goals, still had the legs to do a job on the pitch.

They might settle, though, for a player whose intelligence on the pitch appears to have carried over to the other side of the white lines.