Post-Maradona Blues: Number 10s in the Shadow of an Icon 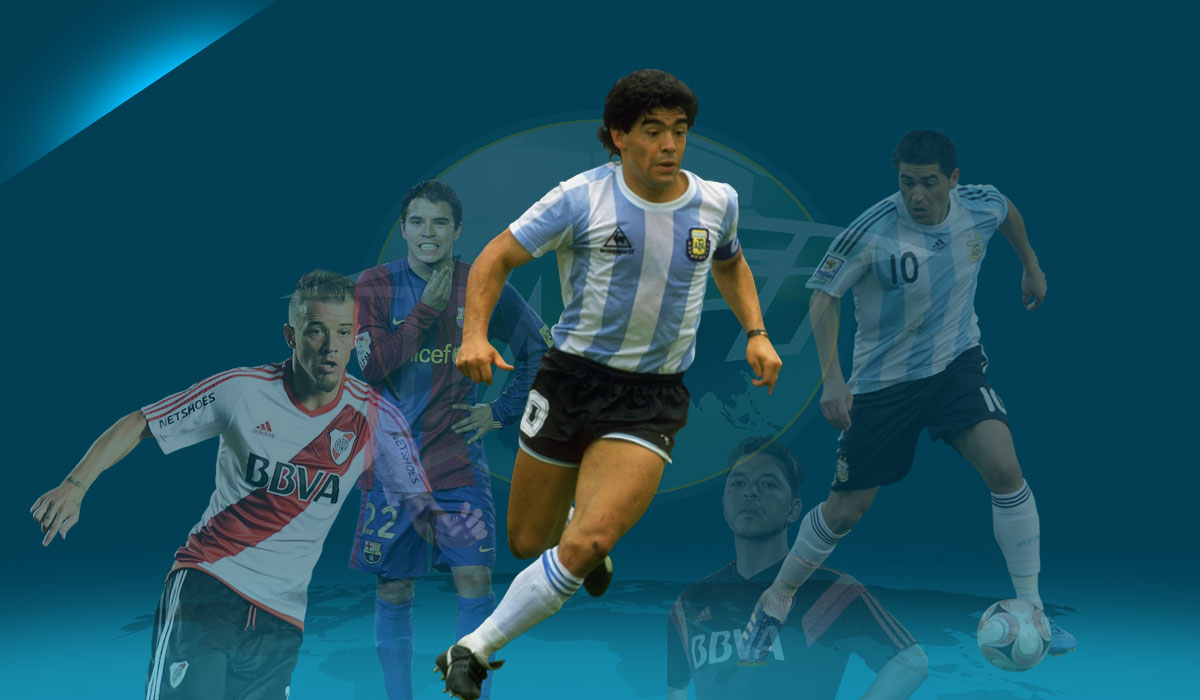 Just ask every Russian goalkeeper since Lev Yashin, every jinking Brazilian since Pelé, and every English forward since Franny Jeffers.

Perhaps the greatest burden, however, is that attached to the recipient of the fateful moniker, ‘The Next Maradona’.

Since El Pibe cut and thrust his way into Argentine folklore, a procession of diminutive number 10s have been cursed with the tag, following each other off a cliff like a gang of Latino lemmings.  Here are just a few of the most tragic examples.

It may be difficult for beard-bothering hipsters to fathom, but Gabriel Batistuta wasn’t the biggest Fiorentina signing in the summer of 1992.  That honour went to his countryman – and first owner of the infamous ‘Next Maradona’ tag – Diego Latorre, who had just helped Batigol secure a stunning Copa America title in 1991.

Whilst Batistuta would become a legend in Florence, Latorre would become a laughing stock, decamping for the Canary Islands with Tenerife after just two miserable appearances.

Despite starring for the Spaniards alongside Fernando Redondo, Latorre would never recapture the form that had seen him star in South America, and he retired in 2006 following ignominious spells in Mexico and Guatemala.

Only two players can claim to be Boca Juniors’ most beloved number 10.  One of them is who you’d expect, and the other is Juan Riquelme.

The son of a former gang member, Riquleme overcame his surroundings to sashay into the hearts of La Bombonera faithful. Two successive Copa Libertadores campaigns paved the way for a transfer to Barcelona in 2002.

If Riquelme was a God, then Louis van Gaal was a po-faced infidel – the Dutchman criticised his arrival as a “political signing”.  After 30 anonymous appearances for the Blaugrana, the languid Argentine was shipped off to mid-table Valencian outfit Villarreal.

Riquelme would lead Manuel Pellegrini’s men to a Champions League semi-final in 2006, but it was his missed penalty which sent Arsenal through to the final in Paris.  By the time he returned to Boca in 2007, he had done much to invigorate a flailing reputation, but the feeling still remained that this was a player who could and should have achieved more.

In 2001, Valencia signed the only player in the world that Maradona said he would pay to watch.  £13 million seemed a snip for a talent that had won five titles before his 22nd birthday, his time at River Plate spent wowing fans as one quarter of the ‘Cuatro Fantásticos’.

The early signs were promising: Rafa Benítez built the side around him as Los Che secured two league trophies in four years, but that would be as good as it got.

After Benítez left for Liverpool in 2004, Aimar was left rudderless in a team beset by managerial instability, seeking shelter at Zaragoza before they were relegated in 2008. Five nameless years at Benfica followed, and a romantic return to River was marred by injury and loss of form.

After being left out of the Copa Libertadores squad by the next entry in this list, he retired in 2015.

Before he was breaking the hearts of River Plate legends, Marcelo Gallardo had his own stay in the Monumental limelight.

‘The Doll’ was not a player to be toyed with – when he wasn’t making Roberto Abbondanzieri bleed in the Buenos Aires derby, Gallardo was a gifted and methodical playmaker, whose technique and temperament brought early comparisons with a similarly fiery number 10.

Gallardo moved to Monaco in 1999, forming a formidable partnership with Ludovic Giuly before falling out with coach Didier Deschamps in his second season.

“He doesn’t have the correct behaviour for a human being,” the Argentine lamented about Deschamps before being booted back across the Atlantic to River Plate in 2002.

After winning the Clausura , Gallardo returned to France with PSG two years later, struggling to make an impact before following the dollars to DC United.

He returned to River a second time in 2009, and was appointed as the club’s highly-regarded coach five years later.

After becoming the latest graduate of the River finishing school in 2003, Andres D’Alessandro signed for Wolfsburg with the weight of expectation on his shoulders.

However, five clubs in as many years nixed ambitions of a career at the highest level, the lowlight of a torrid spell saw him become Portsmouths’ ninth signing of the January transfer window in 2006.

Determined to seek new lows, D’Alessandro deigned to fall out publicly with Zaragoza coach Victor Fernández in 2007, being frozen out before returning home with San Lorenzo.

As though his career hadn’t been embarrassing enough, he then acquired a tattoo of his own face on his chest in 2015.  Something to amuse himself, perhaps, as he continues to warm the bench for Internacional in Brazil.

After Maradona’s wide-eyed antics at the 1994 World Cup brought an end to his international career, a nation eagerly sought a new hero in the number 10 shirt.

Another River graduate, big things were expected of El Burrito when he moved to Sampdoria in 1998, via relegation with Valencia the year before, and an inspired World Cup marred only by a mere headbutt to Edwin van der Sar.

It was a microcosm of a career that one Argentine journalist would eventually describe as a “scandal of violence, depression and madness”.

Ortega trained too little and drank too much, and hopes of a emulating his predecessor were stymied by a crippling alcohol addiction.

There were numerous controversies: a six-month ban at Fenerbahçe for breaching his contract, countless missed training sessions, and lamentable off-field incidents.  It was no surprise when the incoming Diego Simeone ejected him from the River squad in 2008, dispatching him on loan to Nacional B Side Independiente Rivadavia.

He never recovered, retiring in 2012.

When Javier Saviola scored 17 goals in his first Barcelona season, the comparisons with Maradona seemed apt.

‘The Rabbit’ had already become the youngest recipient of Argentina’s Golden Boot, beating El Pibe’s record, but Frank Rijkaard’s arrival at the Camp Nou in 2003 signalled the end of his career in Catalonia before it had even really started.

Despite being named on Pele’s infamous “FIFA 100” list, Saviola struggled on loan to both Monaco and Sevilla, before warming the bench as a substitute-cum-ball-boy for Real Madrid until 2009.  He signed for Benfica that year, and a $30 million release clause was never threatened as he buzzed dully between the lines.

He was the first player to score in six different leagues with nine different teams, which speaks volumes about a talent that never truly found a home.