Ryan Fraser: How The Wee Man Made His Way to the Big Stage 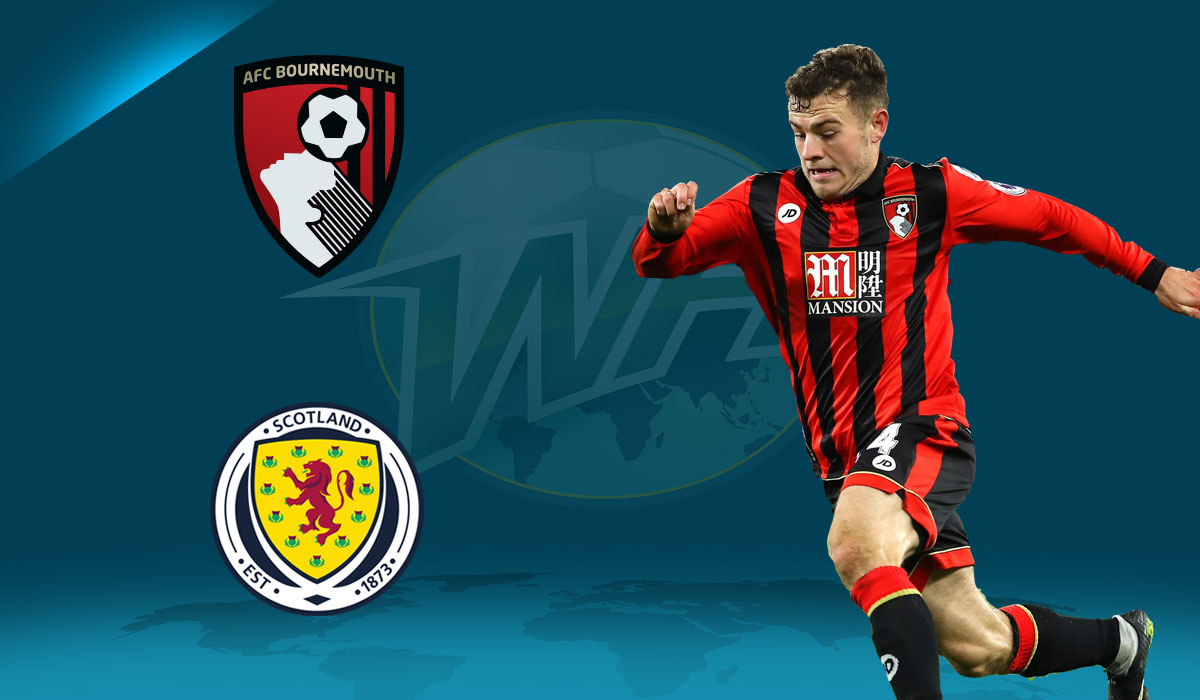 For many Scotland fans, Ryan Fraser has long been part of the precocious list of potential saviours, but he’s only recently announced himself to the footballing world at large. In their game against England, can he finally make his mark on the international stage against his country’s oldest foe?

At the Vitality Stadium, Bournemouth were trailing Liverpool 2-0. Then came Ryan Fraser.

Callum Wilson converted, and with the score reading 2-1 to the away side, Liverpool responded with a third goal, before Fraser himself smashed one into the net from the edge of the area to keep the dream alive.

Two minutes later, Steve Cook controlled a Fraser cross and volleyed in the equaliser, before Nathan Ake completed the comeback in added time.

From 2-0 down to 4-3 victors in the space of 37 Fraser-inspired minutes, the young Scot had repaid his manager’s faith, and the £400,000 Bournemouth sent Aberdeen’s way almost four years earlier had suddenly seemed a bargain.

Cook spoke after the game:

“Wee man was outstanding when he came on today … he’s really taken his chance and won the game for us.”

Of course, there’s more to it than that.

“I’ve seen footage and, excuse my language here, but I got the shit kicked out of me.”

From the north-east of Scotland to the south coast of England, Ryan Fraser’s move had initially caused consternation among fans of Scottish football – after all, how could one of the best and brightest talents in the SPL, fresh from two consecutive young player of the month awards, be allowed to leave for under half a million pounds to a team in the third tier of English football?

Fraser made his Aberdeen debut at the age of sixteen, and had subsequently become the target of more than a few embarrassed fullbacks.

“If some people thought some of those tackles were bad,” his manager Craig Brown said in the aftermath of a game against Kilmarnock, “they haven’t seen what he has faced in previous games.”

Whatever the thoughts of those at home, a combination of Aberdonian debt and Eddie Howe’s vision had created the perfect storm in which to buy the eighteen-year-old, even if Fraser’s development has resembled more of a tectonic shift than a sudden bolt from the blue.

In the months after his mid-season move, he was used sparingly, but he still made five appearances, helping The Cherries secure promotion from League One to the Championship.

In Bournemouth’s two seasons in the second tier, Fraser played in fifty-eight of the club’s ninety-six league fixtures, and when they were finally promoted to the promised land of the Premier League, he earned himself a new contract.

He was also given a choice: stay at Bournemouth, where he’d probably spend most of the time on the bench, or stay in the Championship for another year.

Fraser opted for the latter, and he joined up with Mick McCarthy’s Ipswich Town on loan.

Despite only making fifteen starts due to injury, Fraser was a revelation at Portman Road, where his pace and energy earned praise, both on the attack and in defence.

“I spoke to Eddie [Howe],” McCarthy said at the season’s end, “and I am sure he knew this anyway, but he asked me what I thought, and I said I thought [Fraser] could play for any team in the Premier League. I said, ‘If you put him in, he’ll handle it’.

“He can play on the inside, he goes past people, he can see a pass, and he’s got a goal in him. And he does all the horrible stuff as well, which I think was a big reason he came to us, because they knew he would have to do all that with us.

“And he did,” McCarthy continued. “I remember the game against Brighton when he won a header against a six-foot wide player at the back stick. He bought into all of that. He’s a great kid, and I’d love to see him do well in the Premier League.”

It is perhaps no surprise that Fraser bought into the blood-and-guts fantasy of lower-level English football, seeing as he’d already spent his time making tea and toast for the senior players at Aberdeen, the kind of mild hazing often found wanting in the age of tut-inducing prima donna starlets, apparently millionaires before their time, as if such a time is never faintly ridiculous.

Still, the role of the youngster was a hard one for Fraser to escape: naively gloating about his fondness for pizza at Pittodrie before later explaining he had no idea how to cook for himself at Bournemouth, the boy that Brown described as ‘son-in-law material’ had found the ideal father figure in Howe.

“It’s not just about football with the gaffer,” Fraser would say of Howe and his early days at Bournemouth, speaking not long after his move to Ipswich, when he was still just twenty-one.

“After training he would take me to dinner. Just me and him. We would talk about life in general and how I was getting on [off the pitch]. I was young, and it was great to feel comfortable down there. I had left my family for the first time and he looked after me.”

He would go on to mention the different restaurants he’d been taken to – Italian, Indian – and how he had to stop himself from ordering chips, which is no surprise given his history of fast food and how his weight had previously hit a high of 85kg (a little over 187lbs), which is more than a lot for a supposed athlete that only stands at 163cm (5’4”) tall.

Whether he forwent the excess carbohydrates more through a newfound sense of wellbeing than through a fear of disappointing his mentor, he has, by his own admission, seemingly turned a corner, cutting his weight to 70kg and finding himself more able to last the course.

“I look lean now,” he said in January, not long after his breakout performance against Liverpool, and on the back another festive treat, where he caught up with (and bundled over) famed-for-pace’s Hector Bellerin before nutmegging Petr Cech for Bournemouth’s third in a frantic 3-3 draw with Arsenal.  “But back then [at his highest weight] I had fat cheeks. I wasn’t as ripped as footballers are.

“The thing is, I was still quick, but I couldn’t last games. The first 30 minutes I used to be flying, but then you wouldn’t see me after it, whereas now I can sustain it until 60-70 minutes. After that, I think it’s hard for any winger.”

Of his performance against Arsenal, he added: “[Bellerin] is one of the fastest in the league and the world. He had a couple of yards on me, so to catch him just gives me confidence I can do it to every fullback.”

Fraser used that confidence to win his side a further four penalties – five in total; a league high – as his pace and trickery helped Bournemouth to a 9th placed finish in the Premier League, the club’s best ever campaign, in which he made twenty-eight appearances and scored three goals, helping to paper over the cracks of fellow winger Jordan Ibe’s as-yet-uninspiring move from Liverpool.

However, before he can reflect on what’s become of his career over the summer, he has one more game to play.

Watch practically any press conference by Gordon Strachan during his tenure as Scotland manager, and you’ll see him referring to the importance of players feeling good about themselves.

It explains why, as was the case against Slovenia, his team for the game against England will surely feature as many Celtic players as possible.

Of the six Parkhead regulars in the squad, Craig Gordon, Kieran Tierney, Scott Brown and Stuart Armstrong are indisputable starters, each of whom have blossomed and reached new heights under Brendan Rodgers on the back of their remarkable unbeaten domestic season.

Leigh Griffiths, behind Moussa Dembele in the Celtic pecking order, has finished the season strongly in the Frenchman’s injury absence, and looks a strong candidate to start as Scotland’s number 9, ahead of the “heroic” (yet understandably maligned) Chris Martin.

Like Grant Hanley, Forrest has become a target for derision among the Tartan Army.

Once hailed as the brightest young thing in Scottish football, his career has become one of unfulfilled promise: the rawness of youth has given way to frustrating inconsistency, and injuries have curtailed his progress, making him a kind of lo-fi Theo Walcott, sans the delusions of being some kind of goal machine.

Despite being a favourite of Strachan’s, Forrest’s limited abilities – as well as the tendency for his head to drop after an inevitable mistake – means that the Prestwick-born winger should surely give way to Fraser, especially as Forrest has largely played second fiddle to Patrick Roberts in the Celtic team.

In short, at the age of twenty-three, Fraser already looks like the player the Celtic man once threatened to become, so why persist with the past when the here and now is raring to go?

Above all, there is an intangible, unquantifiable characteristic to consider, a thing valued highly by both the manager and the fans of Scotland, which will be needed if there’s to be any chance of overcoming their annoyingly superior adversaries — confidence.

Beyond his diet, Fraser spoke of how Eddie Howe had helped his change in attitude:

“We went over a game against Tottenham. I got on for one minute and there was one time I could have run at Danny Rose. I got the ball and passed it backwards at 0-0, 90th minute. The manager said: ‘What is your thought process?’ I said: ‘It’s 0-0, the lads have worked hard, and I don’t want him to tackle me, they go up the pitch and score.’ The manager said: ‘Why not think about going past him, getting a cross in and an assist to win the game? Or shoot and score?’ I was like: ‘Alright, yes.’ My mindset was not as positive as his, and that has changed now. ‘What is the positive outcome, not the negative?’ That is basically what I thought in that Liverpool game.”

Good luck getting that from Forrest.

Either way, having missed out through injury against Slovenia, Fraser will surely be in line to at least make an appearance from the bench against the Auld Enemy.

After all, “Ryan is feeling good about himself.”