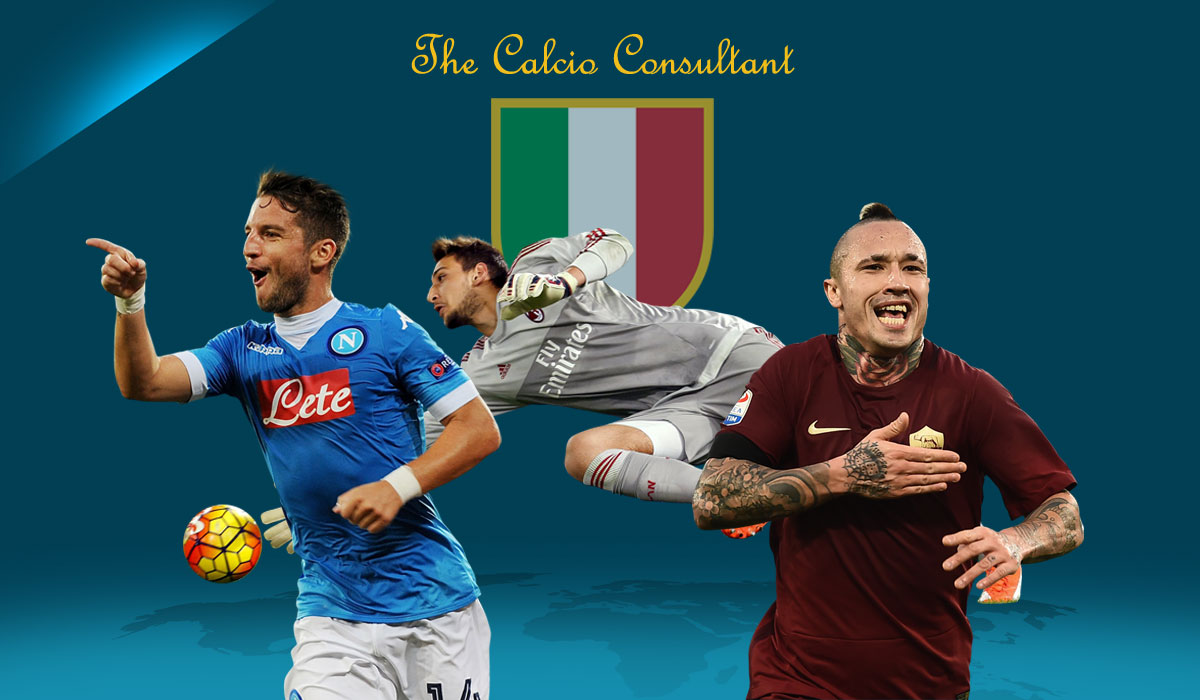 The last scenes of an unforgettable Serie A season were those of Crotone celebrating the most improbable of escapes from relegation.

It would also mark the last time we would see Francesco Totti in a Roma shirt, and emotions poured in from every section of the Olimpico as their iconic captain bid arrivederci to the Giallorossi faithful.

The last slate of Serie A fixtures also produced enough goals for the league to be the most prolific among major European leagues.

1,123 goals outnumbered La Liga, the English Premier League, and Ligue 1. The 2.96 goals per game average was also a better rate than the Bundesliga’s (the Bundesliga has less teams, and therefore less matches).

Leading to that total: so many fantastic stories.

Atalanta surprised everyone with their remarkable run to European football and a 4th placed finish. Empoli, on the other hand, had their epic collapse, and relegation to Serie B.

AC Milan and Vicenzo Montella overachieved and reached Europe, with new ownership bringing hope of a return to prominence. Inter’s underachievement and carousel of managers brought anguish to their supporters.

Lazio over-delivered under Simone Inzaghi, with Ciro Immobile’s career being resurrected. Fiorentina simply under-impressed and manager Paulo Sousa took the fall for it.

There were revelations like Patrick Schick, Papu Gomez, and Roberto Gagliardini. And if you even got the chance to take in just thirty minutes of Napoli, it was enough to make your jaw drop in appreciation of their attractive, attacking football.

Serie A underwent a face lift this season; it’s now an attacking league. With the stars signing contract extensions, complimented by young and promising talent, there is no sign of things getting back to the way your father remembered Calcio to be.

So with all that in mind, it’s time The Calcio Consultant put a bow on this Serie A Season. I have my team of the season (ever so slightly different from the one we picked on the Serie A Sitdown podcast, below), and a few other awards to hand out as well.

Let’s get on with it.

The Calcio Consultant’s team of the season

Gigi Buffon and Lukasz Skorupski got consideration here as well, but give me the young shot-stopper for the Rossoneri.

His efforts, as we mentioned in the podcast, were easily worth 12 of Milan’s 63 points en route to Europa League football.

He is also The Calcio Consultant’s Goalkeeper of the Season. Oh, and that last second save on Khedira to preserve the 1-0 win at the San Siro in October? Save of the Season.

As I mentioned in the podcast, if you want Andrea Conti of Atalanta here, I won’t fight you.

Dani Alves got off to a disappointing start, but there is no potential for a treble for Juventus without the veteran Brazilian.

Goals, assists, and improved defending were all offered up, especially near the end of the season.

In my Juventus Player of the Season blog last week, Bonucci was my pick for MVP. Enough said there.

Again, brilliant defending and his ability to start play from out of the back is underrated.

Mattia Caldara of Atalanta and Federico Fazio of Roma deserve recognition here, too. However, Koulibaly would get a lot more attention if he was in a defence that was more stubborn.

Tasked with keeping a porous back-line glued together (you try looking good when you’re partnered with old man Raul Albiol, with full backs like Faouzi Ghoulam who are weak on the tackle – oh, and Pepe Reina in goal) whilst keeping some of the best strikers in Serie A in his back pocket, Koulibaly excelled when leaned on heavily, and without him, Napoli were looking at a lot of 4-3 and 5-4 scorelines.

As I said in my blog last week, there’s not a better left back in all of world football. And in Serie A, there’s no consideration for anyone else. Contributed in attack and was strong in defence.

It was a season of talented wingers that create, cross, and score. Though give me the Lazio man on the right, as his pressing, tackling, and interceptions are lost when you consider he does that and everything the other talented wingers do.

Very versatile, and a mainstay in Simone Inzaghi’s Lazio this season. You could have Mohamed Salah of Roma here, or Suso from Milan, and I won’t argue.

There was a stretch of the season where you could make the case that the Belgian was the best midfielder in the world. A stunning goal against Milan could qualify as goal of the season.

Plays with incredible energy from box to box, and showed off his finishing touch in more than just that curler against the Rossoneri.

This is where I start to differ a little from the collective team we put together on Serie A Sitdown. One could really flip a coin here between Pjanic and his teammate, Sami Khedira (who we picked on the podcast), but for this blog, the Bosnian gets the nod.

His ability to connect possession from defenders to attackers was crucial for Juve. He also deputised in an advanced role when Paulo Dybala was injured, but looked more than comfortable as the deep-lying playmaker.

The creative linchpin of the Atalanta attack was a huge reason for their surprising run to 4th in Serie A. 16 goals, 10 assists.

He made 37 of a possible 38 appearances in Serie A this season, and it can be argued that Atalanta would not have reached the Europa League without him. Argentina rewarded him with a call up to their national team.

Napoli’s season looked like it was headed for disaster when Gonzalo Higuain’s replacement, Arkadiusz Milik, went down with a lengthy injury.

Tasked with going from winger to false nine, Mertens simply flourished, and was one goal shy of being the season’s Capocannoniere.

28 goals for a Napoli team loaded with them; had Mertens not excelled, Napoli just might be preparing for Europa League football next season instead of a Champions League playoff.

I know, how am I leaving the Capocannoniere off my own personal team of the season?

Yes, Edin Dzeko’s 29 goals were impressive, but in my opinion Belotti’s 26 goals were more important to his team.

Remember, he led the attack of a Torino team that was one of the worst (defensively) all season. Without Belotti, Torino would likely have been fighting off relegation instead of finishing in the top half.

The Calcio Consultant’s Manager of the Season

I am not slighting Gian Piero Gasperini of Atalanta with this pick; what he did with Atalanta was impressive.

Simone Inzaghi was terrific, too, in leading Lazio to Europa League and the Coppa Italia final.

Vicenzo Montella exceeded expectations with a meagre squad at Milan.

Of course, Davide Nicola deserves credit for Crotone’s incredible survival. And yes, Massimiliano Allegri’s change to a 4-2-3-1 was a masterstroke.

However, I am going to go contrarian by comparison to the rest of the pundits out there and pick Spalletti.

Say what you want about the mentality of this Roma side: Spalletti is the manager of a team that recorded 87 points in Serie A, a club record. This number would win a Scudetto in most seasons.

Even more impressive, his Roma pushed Juventus to matchweek 37 to clinch this league, when many of us thought The Old Lady would have had this wrapped up at week 29 or 30.

Spalletti had to deal with the elephant in the room in the process, Francesco Totti, and the fans’ demand for him to play more on his Farewell Tour. He never buckled under that pressure and did what was best for Roma.

He guided Roma to a last eight place in the Europa League (and should have reached the last four had it not been for a dodgy offside call). Roma overcame a disastrous start in the Champions League playoff to Porto to achieve all of this.

For that, Luciano Spalletti is The Calcio Consultant’s Manager of the Season.

Roma will miss him.

The Calcio Consultant’s Player of the Season

Leonardo Bonucci was the best player on the best team, and the league’s best defender.

Gianluigi Donnarumma made stop after stop to preserve Milan’s points and eventually their European place.

Papu Gomez was the creative inspiration behind Atalanta’s unlikely run.

Andrea Belotti, as I mentioned, was the difference between Torino being a top half team and a relegation struggler.

All of them are worthy, but Mertens ability to excel in a changed role when Milik was injured and Manolo Gabbiadini went out of his way to fluff his chance is what stands out just a little further.

To our guest panellist Mark Neale’s point, Mertens was so good that when Arkadiusz Milik was fit again he couldn’t get a game for the Partenopei.

A winger turned false nine turned striker exploded for 28 goals and was the most prolific figure of the most potent attack in Serie A. His performances this season earned him a contract extension, too.

No point in fixing what isn’t broken. He was the unanimous choice on Serie A Sitdown, and Dries Mertens is the Calcio Consultant’s Player of the Season.

Loading...
Newer Post
Ryan Fraser: How The Wee Man Made His Way to the Big Stage
Older Post
Uruguay vs Venezuela – U20 World Cup Semi-Final Preview