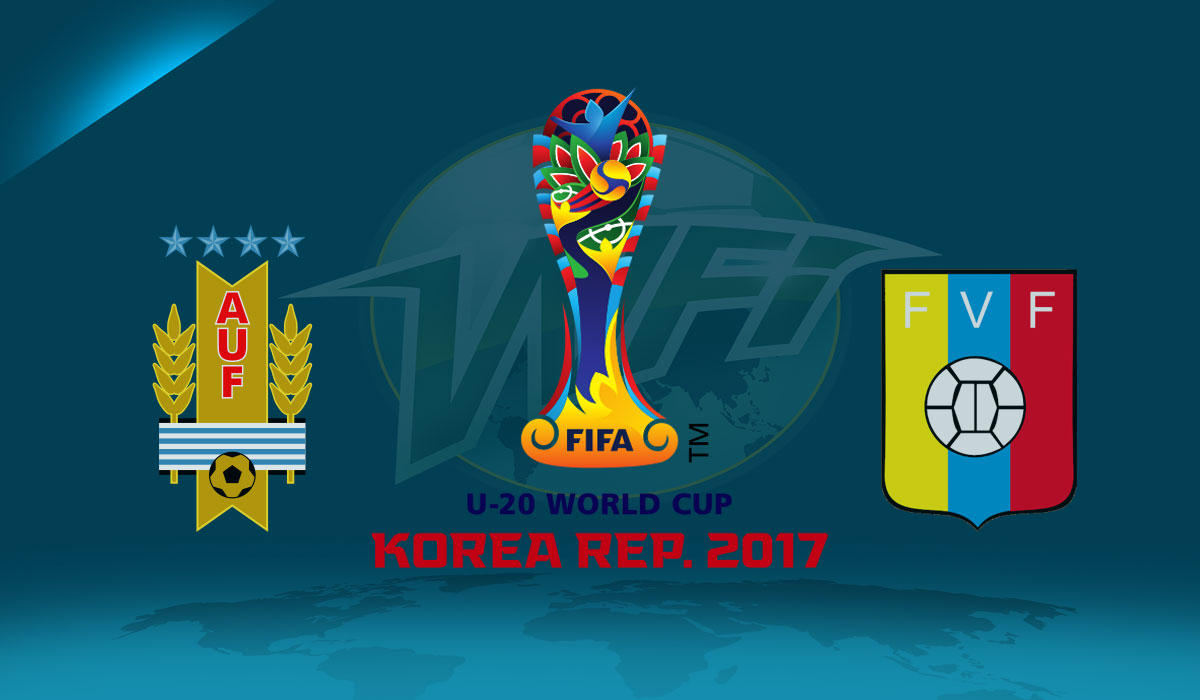 Since 2001, the U20 World Cup final has always featured a South American nation, and 2017 will be no different.

In the blue corner is Uruguay, 2013 runners-up and one of the traditional powers of the continent.

Awaiting them in their now near-iconic red-wine shirts is one of the regions’ emerging powers: Venezuela.

La Vinotinto (literally The Red Wine) are only in their second ever U20 World Cup, but they’ve arguably been the most impressive side in the competition.

A near-impenetrable defence, a talented, hard-working midfield, and dynamic attackers make them an irresistible mix of being hard to beat and exciting to watch.

Much of the credit has to go to their gregarious manager Rafael Dudamel, who is also head coach of the senior side.

He is tactically astute, and clearly a popular man with his players, evident when he was mobbed by them during an emotional interview after their historic 2-1 win over the USA in the quarter-finals, and he was then seen leading them in celebration in the dressing room afterwards.

Venezuela’s campaign began with an impressive, comfortable 2-0 win over Germany; the winning margin really should have been more. In their next game against Vanuatu, they were more clinical, racking up seven unanswered goals against a side that ran Germany and Mexico close.

Their final game in the group saw them beat Mexico 1-0, qualifying them for the knockout stage with a perfect record.

In the knockouts, they have needed extra time to beat the Asian champions Japan, as well as a confident USA, but they really should have won both games in normal time.

If they have an obvious weakness, it is their finishing, but no side has scored more than Venezuela, and only Zambia have created more chances.

In the U20 South American Championships at the start of the year, the standout players were Yeferson Soteldo, an artful dodger that dribbles with the ball glued to his feet, and Yangel Herrera, a leader and all-round central midfielder, with a great engine.

Soteldo has had a quieter World Cup than perhaps what was expected, but Herrera’s standing has certainly grown.

The number 8 has already been tipped for stardom by many after a stellar first half of the year.

He was signed by Manchester City at the start of the year before being loaned to New York City FC, where he has made a good start to life in the MLS.

In South Korea, Herrera has arguably been the player in the tournament, where he has produced the goods when his nation needed him most, with Ronaldo Lucena proving to be a dependable sidekick in midfield.

A player of Herrera’s breed and quality is rare these days, and you can see future comparisons being made with Chile’s Arturo Vidal, a star the Venezuelan is said to admire.

If Herrera is Venezuela’s Vidal, then Adalberto Peñaranda is their Alexis Sanchez.

Quick, skilful and enterprising, Peñaranda gives Venezuela flair and thrust. Usually starting wide, he does a lot of his damage by darting across the pitch in the final third, shooting and creating from in and around the box, reminiscent of the aforementioned Chilean.

Peñaranda was missing from Venezuela’s squad for the U20 South American Championships and had featured little for Malaga in La Liga this past season; coming into the side as a wild card, he has turned out to be the ace in the pack: a player full of talent, he needs to be at a club willing to give him the same sort of freedom and expression this Venezuela side have given him.

La Vinotinto’s promising attacking prospects do not end there. Their top scorer in this tournament has been wide forward Sergio Cordova, who has been having a dream tournament, running sky high on confidence.

He’s a fascinating player to watch down the wing, but whether this is the start of a brilliant career or just a flash in the pan remains to be seen.

For all their attacking stars, it is Venezuela’s defence that really deserve much of the plaudits. They went over an incredible 500 minutes without conceding a goal in this World Cup, before finally letting one in when they were already 2-0 up in their quarter-final against the USA.

One worry ahead of the semi-final against Uruguay is that both centre back Williams Velásquez and full back José Hernández are suspended, with the imperious Velasquez being the more notable miss.

Goalkeeper Wuilker Fariñez is already a regular for the senior side and has shown his class on the rare occasions he has been called upon.

He pulled off a couple of vital saves either side of half-time in the last 16 clash against Japan, the one time in the whole tournament La Vinotinto looked to be suffering for an extended spell. Overall, Venezuela have dominated every match they’ve played in, and Fariñez has had little to do.

Many believe Venezuela could be a force to be reckoned within South American football over the coming decade, and a win over Uruguay in this semi-final could well seal that belief.

La Vinotinto will be confident of reaching the final, having thrashed Uruguay 3-0 in the final round of the U20 South American Championships, after drawing 0-0 with them in the group stage.

However, if there is one doubt about them, it is their inexperience as a nation in games like this, something their opponents do not lack.

U20 South American champions Uruguay went into the tournament as one of the favourites, and they are living up to that expectation.

In 2013, they reached the final, only to lose on penalties to France. Two years later, they suffered yet more penalty heartbreak, against Brazil in the last 16.

In this World Cup, they have already exorcised some of their penalty demons; they were just one successful Portuguese spot kick away from going home in the last round, but they managed to mount a comeback thanks to a couple of excellent saves from Santiago Mele.

It was a game in which they found themselves 1-0 down within a minute of kick off, but they responded brilliantly, dominating the game until they equalised.

Portugal got back in front before the break, but Uruguay reacted once more in the second half to send the game to extra time and penalties.

It was the first time a team had really asked really difficult questions of La Celeste, but they answered them well. However, this Uruguay side does seem unnecessarily reactive (rather than proactive) in this World Cup.

Theirs is a side full of star quality in every area of the pitch. Like Venezuela, it took until the quarter-final for La Celeste’s defence to be breached.

Clean sheets against Italy, Japan, South Africa and Saudi Arabia are impressive at this level.

Centre back Santiago Bueno (above) was signed by Barcelona at the start of this year, and on this evidence it is easy to see why the Catalan giants snapped him up.

Calm, composed, and able to read the game brilliantly, Bueno has notably improved since we last saw him earlier in the year in the South American Youth Championships. His partner at the back is Agustin Rogel, one of Uruguay’s most consistent performers.

In the centre of the park lie two highly-rated technicians who are already on the books of the two recent UEFA Champions League finalists.

Juventus’ Rodrigo Bentancur (below) is hard-working and recycles the ball effectively, if not spectacularly, while Real Madrid’s Federico Valverde is even more versatile: an excellent dribbler that can also control the tempo when deep, Valverde can play further up the field, if necessary.

Nevertheless, both midfield talents have obvious physical limitations, and it is possible Venezuela’s midfield pivot of Herrera and Lucena could overpower them, especially with fellow regular midfielders Facundo Waller and Marcelo Saracchi missing through injury, limiting Uruguay’s options.

Striker Nicolás Schiappacasse and attacking midfielder Nicolás De La Cruz are really key players when Uruguay shine, but both have been quieter than expected in the tournament so far.

Arguably their best player has been the full back José Luis Rodríguez. His energy and creativity down the right-hand side has given Uruguay some much needed width when opponents have marked De La Cruz and Schiappacasse out the game.

A popular comparison is with Wayne Rooney; indeed, Amaral’s explosive power and swagger is reminiscent of the England striker’s Euro 2004 vintage.

Amaral finished top scorer for Uruguay in the South American Championships, but has had a limited role in this World Cup to date due to fitness and injury.

His first contribution to the tournament was smashing a free-kick into the top corner of the net to give Uruguay a win over Italy in their opening match, while his last was to miss a penalty in the shootout against Portugal.

He also missed a penalty in Uruguay’s defeat to Brazil two years ago, so he is not to be relied upon from twelve yards.

Penalties can’t be ruled out when these two well organised sides meet in what should be a fascinating semi-final.

So, wherever you are at 9:00GMT on Thursday 8th June, I urge you to watch this one; you may just see one of the matches of the year.