Book Review – From Delhi To The Den by Stephen Constantine 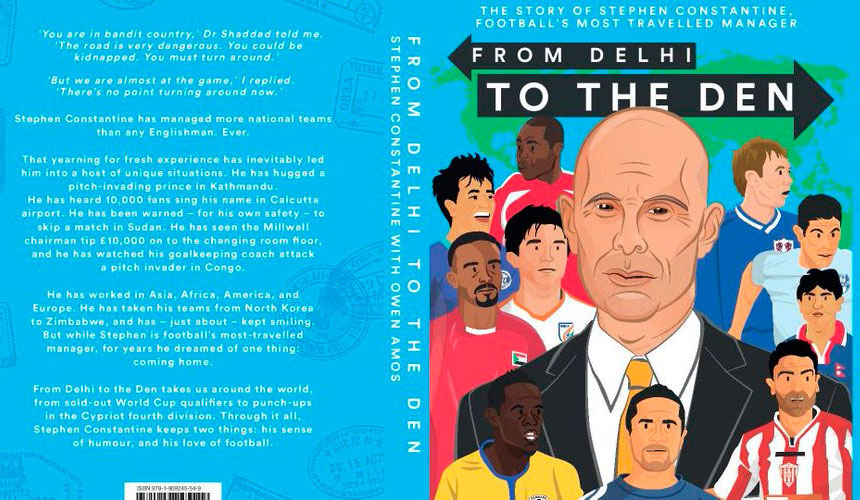 The first thing to say about Stephen Constantine’s brilliantly written book, From Delhi To The Den, is that it’s not so much written down, but chiselled from granite. Unlike many traditional footballing autobiographies, there is little in the way of being eased into the first few chapters with gentle recollections of school and childhood; by the end of the fourth page he is a sixteen-year-old boy alone, having left his family home following years of a deteriorating relationship with his father.

The remainder of the book can be summed up in two words: “nomadic” and “driven” (nomadic is indeed the first word of the book). It is also a story about how blinkered coaching recruitment is within the UK, and if it could ever change.

Constantine’s early life was one of constant upheaval, both geographical and emotional. The family flitted between England and Cyprus, and were on the latter island when the Turkish invaded. The family were evacuated by the British Army, but not before the young Constantine had jumped off the back of a lorry to retrieve his treasured football and autograph book which contained the names of many England players of the time.

Unsuccessful trials at Millwall and Chelsea saw Constantine begin his long journey across the globe, initially to the north-east of the United States where he tried to forge a career as a player whilst also taking a series of other jobs, such as working in gas stations or selling goods literally on the streets of New York.

It’s not inconceivable that many reading this book will never have heard of Constantine beforehand, and in part that is the best thing about it. This isn’t a recently retired Steven Gerrard or Frank Lampard waxing lyrical on a career you’ve seen played out daily for the last twenty years, this is the struggle of a highly determined individual with a passion for football and work that takes him to Asia, Africa, North America and many other places in between.

The book, in part, plays out like a novel, and Constantine is the main character whom the reader buys into and wills to succeed. From faxing endless CVs without reply, to long periods of unemployment and desperately trying to cover the family bills by taking a series of filler jobs between coaching roles, to hitting the glass ceiling within the English football system. The latter is particularly perplexing: having successfully managed the Nepalese national team, Constantine struggled to find a coaching position within England and found himself working at the Royal Mail. It seems that those in the hierarchy of English football clubs hire either safe bets that have worked the managerial circuit for some time, or a former player that the board feel may know the club. Someone who never played in England and whose CV contains such alien places as Malawi, Nepal and India isn’t likely to get a look-in.

But there’s no flies on Constantine either, demanding the best for his players not only from the away fixtures he takes his teams to, but bizarrely from his own FA’s as well. Anecdotes about how the Indian players slept in the grandstand of a stadium where they were due to play could have fazed some, but Constantine is made of more assertive stuff than that, though the fate of footballing goats in Nepal proved too much even for this tracksuited Indiana Jones. As well as wanting him to succeed, there is much to admire about Constantine on a personal level too. His work ethic is immense, he has an obvious love for both football and his family, and he doesn’t let setbacks deter him either; rather they make him more determined.

The book is a fascinating insight into the type of coach that we as football fans rarely get to see and appreciate. It’s full of anecdotes and opinions from a viewpoint outside of the elite footballing bubble; most of all, it’s a well-crafted, highly enjoyable read