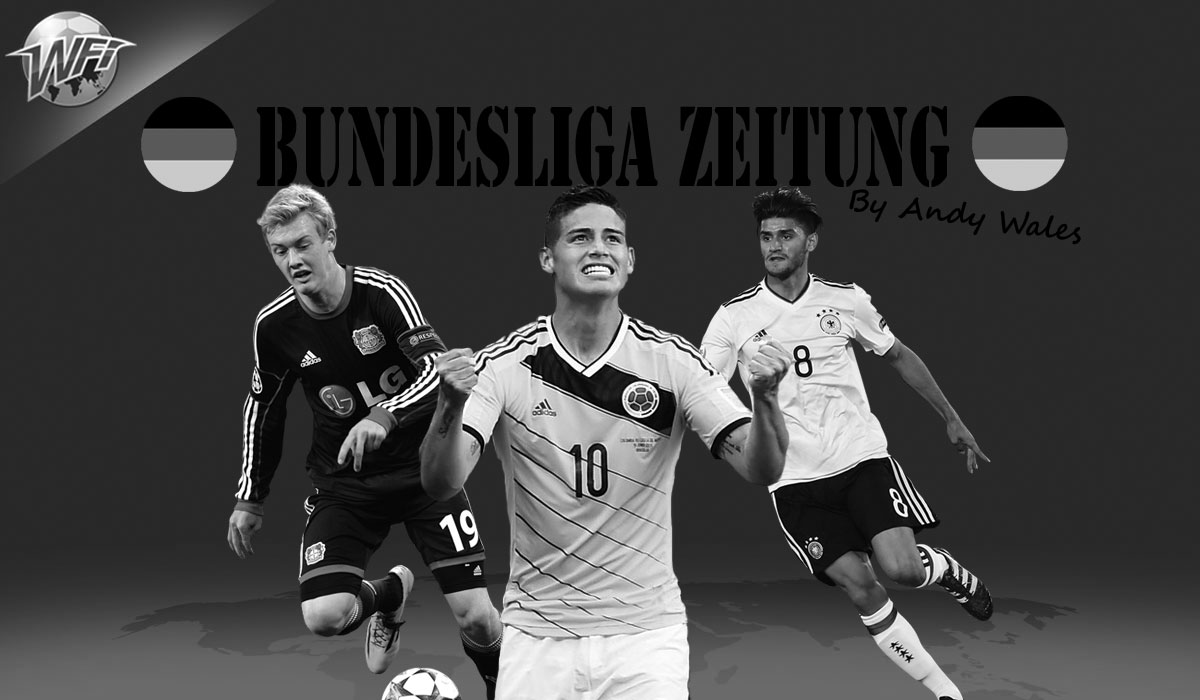 Welcome to the first of what will be a regular feature here on WFI, as I cover the German Bundesliga season (writes Andy Wales).

The Bundesliga has long been an interest of mine, since I grew up there in the 1980’s, and I won’t deny my personal interest and connection with two clubs in particular: Hamburger SV and Borussia Dortmund. So, this column will be quite personal to me, and I sincerely hope you not only join me for this journey, but enjoy it, too.

For this first instalment, I want to look ahead to the forthcoming season, with some predictions, comments and thoughts on some of the transfer business done by Germany’s finest.

In terms of predicting the league winners, Bayern are naturally favourites, and it’s nigh-on impossible to see them not securing an incredible sixth successive Bundesliga crown.

Bayern are simply imperious, and with their spending power and fantastic squad of players, it will take something special to loosen their grip of domestic domination. Despite them losing two of this current generation’s best players – Xabi Alonso and Philipp Lahm – to retirement, the additions of Niklas Süle, Sebastian Rudy and Corentin Tolisso should help to minimise their loss.

The loan signing of James Rodriguez from Real Madrid appears shrewd business and could help add that creative spark, following the departure of the enigmatic Douglas Costa. It would perhaps take a combination of injuries, poor form, attention focused elsewhere and an incredible run from a rival for Bayern not to finish top of the pile once more.

However, that’s more about just how strong this current Bayern Munich squad is, rather than the rest of the league being poor. Equally, the league’s relative dip in quality should not put people off from watching, because the Bundesliga is a fantastic spectacle; from the quality of matches and players on view, to the incredible atmosphere at almost every game.

Borussia Dortmund are a club synonymous with atmosphere and will be expected to be Bayern’s main challengers, but it has been a summer of change at the Westfalenstadion. Out went Thomas Tuchel, in came Peter Bosz after a successful spell in charge of Ajax. Speculation over the future of star striker Pierre-Emerick Aubameyang has been rife, and he remains in yellow and black for now, but whether or not the same will be said for Ousmane Dembele come September is another issue entirely, with Barcelona’s interest in the player creating a lot of unrest.

Transfer activity that has been concluded for Dortmund includes the arrival of the talented and highly rated young midfielder Mahmoud Dahoud from Borussia Mönchengladbach, with defender Matthias Ginter heading in the opposite direction. The experienced (but injury prone) Sven Bender also left, moving to Bayer Leverkusen to link up with his twin brother Lars. Defender Ömer Toprak made the switch the other way, leaving Leverkusen to provide competition to Sokratis and Marc Bartra for the starting spots in the centre of Dortmund’s defence.

Whether or not Bosz is the man to help Dortmund break Bayern’s stranglehold on the Bundesliga title remains to be seen. Judging by the Super Cup, Bayern are yet to slip into a groove, which may present an opportunity, but Dortmund still look prone to defensive lapses.

As for Gladbach, Leverkusen and Schalke, their drift into midtable mediocrity has been disappointing. For Leverkusen, I envisage a very difficult campaign, with more responsibility falling upon the young shoulders of Julian Brandt after the loss of Hakan Calhanoglu to AC Milan and Javier Hernandez to West Ham.

Schalke remain that enigma: a big club with talented young players, but unable to consistency perform and achieve results; perhaps this year will be different, but then again… perhaps not.

RB Leipzig surprised everyone last season, and although they are an unpopular club with the majority of German football fans because of how their rise to prominence was facilitated, their football was a breath of fresh air. The emergence of Emil Forsberg and Naby Keita have attracted suitors from amongst the European elite.

However, when both expressed a desire to move on and further their careers elsewhere, Leipzig took an aggressive approach in rebutting their wishes. Along with a lot of media attention, this has brought a sense of admiration from a lot of onlookers. However, for all their lofty ambitions, the club is still in a formative stage and does need to carefully manage the fine lines between ambition and being seen as obstructive, as the latter could become problematic for a club that works under the model of scouting and developing younger talent.

The danger of the Keita-Liverpool saga for Leipzig is also dressing room harmony ahead of them launching their very first Champions League campaign. Establishing themselves as a consistent challenger at the top of the Bundesliga is the challenge ahead for Leipzig, and now that opponents are familiar with their team and approach, this season represents a huge test for coach Ralph Hasenhüttl.

At the other end of the table, Wolfsburg’s fall from grace saw them in the relegation playoff, and although they won it to maintain their top-flight status, I think it’s likely they will fair little better this year. Hamburger SV, who have flirted with relegation in recent years, will also be expected to be in the fight for survival come May.

VfB Stuttgart and Hannover came straight back up from 2. Bundesliga, and in all likelihood, they will also be involved in the relegation scrap; a battle I’d expect Freiburg, Augsburg and Mainz to get dragged into at some point.

All in all, with Bayern looking vulnerable pre-season, we maybe – just maybe – could potentially see them finally deposed as champions. The race for the European spots is likely to be an exciting one, with the fight for relegation just as competitive. Add to this the emerging playing and coaching talent, and it’s another Bundesliga season that I’m looking forward to watching and sharing with you.