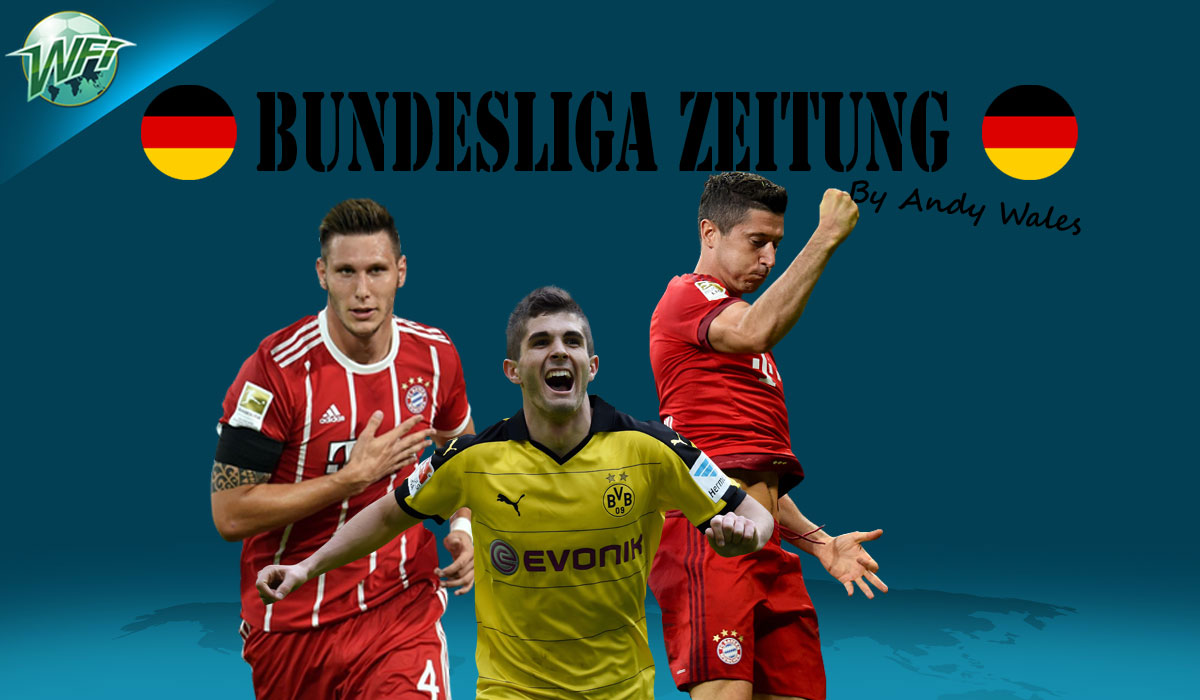 This past Friday night saw the Allianz Arena play host to the Bundesliga curtain raiser for another season, with a restrained level of pomp and ceremony; something I actually quite liked, (writes Andy Wales).

Defending champions Bayern Munich, who looked so sluggish in pre-season, came firing out of the blocks and it took little time for new signing Niklas Süle to head them into the lead against Bayer Leverkusen. Season openers can sometimes be a tight and sterile affair, but this was anything but.

What we saw was an almost typical Bundesliga match: entertaining, open football with some of the defending leaving a lot to be desired. Although it finished 3-1 in favour of the champions, Bayern could’ve scored more, and Leverkusen should’ve scored more, too.

Despite Süle looking very assured, Bayern looked vulnerable and Leverkusen will be encouraged by the amount of chances they created. However, for all the positives that can be taken from their ability to create said chances, their finishing needs to improve, but not as much as their set piece defending, which was costly for them last season and will be again unless they can make some sharp improvements.

This match will also be remembered as the first time the Bundesliga saw the decisive impact of VAR. The resulting penalty was calmly tucked away by Robert Lewandowski, but deferring to the VAR studio became a common occurrence across the weekend, perhaps a sign of things to come in football.

Pre-match for Borussia Dortmund, the talk was all about the ongoing drama of Barcelona’s pursuit of Ousmane Dembele, and the multiple injuries that left new boss Peter Bosz without the likes of Guerreiro, Reus, Weigl, Schmelzer, Durm and Schürrle. However, it did see the return of Mario Götze and the continuing rise to prominence of Christian Pulisic in what turned out to be a comfortable 3-0 victory at VfL Wolfsburg.

Last season, Wolfsburg avoided relegation by winning the playoff, and the early signs are that they could be in a similar position, or perhaps even worse, come next May.

RB Leipzig have been under the spotlight this summer due to Liverpool’s attempt to sign star midfielder Naby Keita, but with focus back on the business of gaining points, rather than fending off suitors, there was a trip to Gelsenkirchen to navigate.

Schalke had a terrible start to last season and endured another inconsistent campaign, so it could be considered something of an upset that they came away from this with a 2-0 victory.

Could this talented Schalke squad be finally realising its potential? Only time will tell, but what was noted from this performance was the joy with which Schalke played at times in this contest, so maybe, just maybe, this isn’t a false dawn.

Perhaps the most bizarre moment of the weekend was in Hamburg’s 1-0 win over Augsburg. Nicolai Müller scored what turned out to be the winning goal, and as he went into a spin to celebrate, he landed awkwardly and ruptured his knee ligaments. It sounds funny, but the winger is now looking at around six months on the sidelines.

This is the celebration that injured Nicolai Müller which consequently puts him out for seven months. pic.twitter.com/Z0vIjBgsWe

After a number of difficult seasons, Hamburg will be delighted to have started this campaign with a win and are this week’s Friday night match, away at FC Köln, who lost their opening fixture 1-0 at Borussia Mönchengladbach. On paper, it’s not a match that necessarily whets the appetite, but it could prove to be an intriguing contest.

One of the Saturday afternoon matches that catches my eye is Bayer Leverkusen playing host to Hoffenheim. It will be interesting to see if Leverkusen can continue their impressive attacking play, whilst also improving their defensive work.

The result may rest on Leverkusen’s difficulties at defending set pieces against a Hoffenheim side that were one of the highest scorers from them last year. Hoffenheim’s Champions League ambitions will be the focus mid-week, when they travel to Anfield for the second leg of their qualifier against Liverpool, so perhaps Leverkusen will view this as an opportunity to gain a valuable three points.

Saturday’s late kickoff sees Dortmund take on Hertha Berlin, who no longer look the notoriously tricky opponent of the first half of last season. Dortmund’s tendency to have moments of defensive fragility do mean that Hertha will hope to capitalise on the counter attack, but the Yellow Wall will understandably be expecting a strong performance, particularly after scoring three without reply at Wolfsburg.

On Sunday, all eyes will be on RB Leipzig against Freiburg. Many clubs’ fans have shown their displeasure toward the DFB over recent weeks, with multiple banners to communicate what they see as the DFB commercialising German football and eroding the fan culture they are so proud of.

RB Leipzig, with their financial backing from Red Bull and their meteoric rise from nothing, are a particular bone of contention with fans of traditional clubs.

The DFB have indicated they wish to discuss matters with fans, so how Leipzig perform will be under further scrutiny after their opening weekend loss. The question of the clichéd ‘second season syndrome’ will be raised if the small club with lofty ambitions again fails to win.

On paper, they should, but Freiburg will be no pushovers, and how Leipzig deal with the attention and pressure could make for compelling viewing in what promises to be another exciting weekend of Bundesliga action.