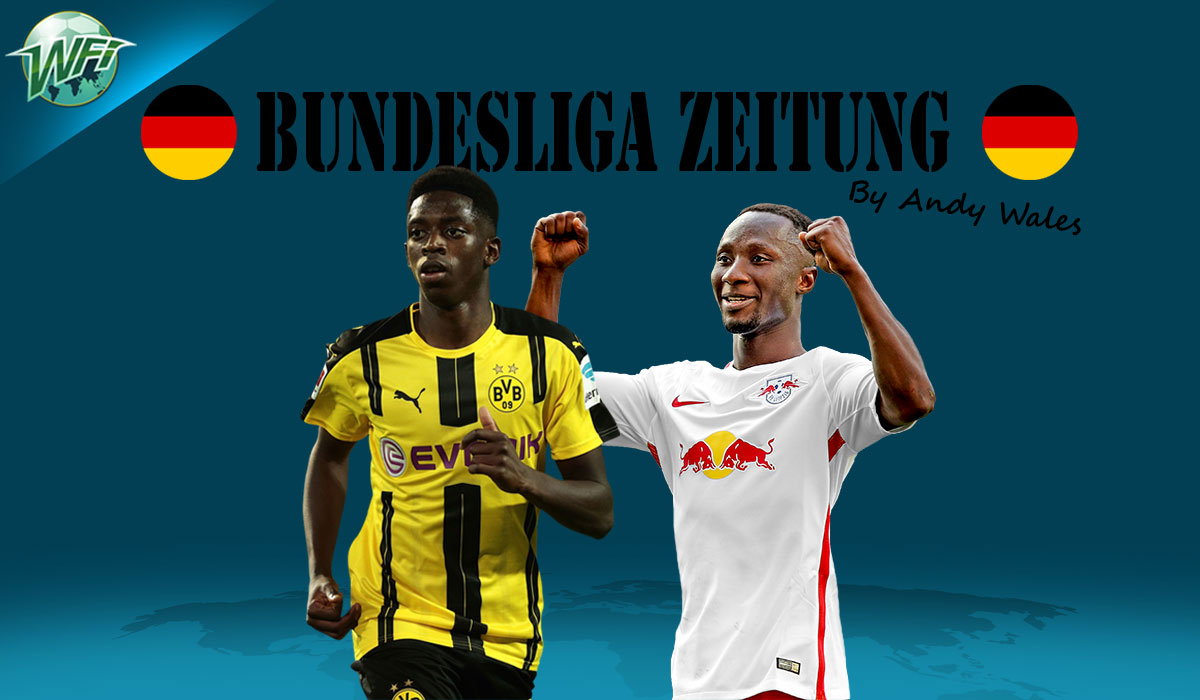 As we head into the first international break of the season, it’s been another interesting week for the Bundesliga (writes Andy Wales).

It began mid-week with Hoffenheim’s visit to Anfield in the second leg of the Champions League qualifier. Julian Nagelsmann’s side succumbed to a 4-2 defeat on the night, 6-3 on aggregate, and although staying true to his attacking principles arguably cost him in this tie, there will doubtless be valuable lessons learned for the young coach.

So Hoffenheim now find themselves in the Europa League, where they will face Istanbul Basaksehir, Ludogorets and Sporting Braga.

On the face of it, it’s an opportunity to progress and Hertha Berlin may feel the same in their group with Athletic Bilbao, Zorya and Ostersunds. Köln have what looks a tougher task with BATE, Crvena Zvezda and the glamour tie of Arsenal.

For those in the Champions League, Bayern Munich will face stiff competition for top spot with PSG, but will be happy to have Celtic and Anderlecht in their group. For Borussia Dortmund, it doesn’t get any tougher than reigning European Champions Real Madrid. They also face the test of Tottenham Hotspur once more, but should feel confident of dispatching Apoel.

RB Leipzig’s debut Champions League campaign can potentially be a memorable one as, on paper, they have a good draw. Aside from last season’s surprise outfit Monaco, Leipzig should fancy their chances against Porto and Besiktas. There is obviously a long way to go, but I quite fancy all three Bundesliga sides to progress through the group stages.

So, with European draws done, it was back to the business of Bundesliga football on Friday night and we had the surreal sight of Hamburg fans singing about their team being top of the league. This was not northern German humour because Hamburg, the club that has become almost synonymous with the relegation play off, actually was sitting atop of the Bundesliga – even if it was only for 24 hours.

Their performance in the 3-1 win away at Köln may not have been exceptional in itself, but the result was. Also impressive was the fact that after the sending off of Mavraj for the visitors and Köln getting a goal back, HSV didn’t collapse under the pressure; instead, they held firm and added a third to seal the win.

Can they maintain this start? That remains to be seen, but positivity this early in the season is a rare commodity and for that, Markus Gisdol deserves praise.

Compliments are also heading the way of Hannover 96. After a miserable 2015/16 season, that saw them relegated, they immediately won promotion and have incredibly started this campaign with back to back wins.

Their opening day victory away at Mainz might not have raised too many eyebrows, but following it up with another at home to Schalke. Last week I questioned if perhaps Schalke could find some consistency, but it appears Schalke are still…. well, Schalke.

For the two main title protagonists, Bayern chalked up a regulatory 2-0 win over Werder Bremen, thanks to a brace from Robert Lewandowski. Rivals Borussia Dortmund enjoyed a comfortable 2-0 victory at home to Hertha Berlin, with Pierre-Emerick Aubameyang getting on the score sheet.

Not only are we likely to see Bayern and Dortmund battle it out for the title, the battle between Lewandowski and Aubameyang to be top scorer could be just as titanic.

Once we return from the International break, the Friday night match will again feature Hamburg, this time playing host to RB Leipzig. It’s unlikely we’ll see Hamburg continue their 100% record, especially with the counter attacking ability of Leipzig, but you can never say never in the Bundesliga.

Attention will predictably be on the Saturday evening kick off, with Hoffenheim taking on champions Bayern. After their European disappointment, Hoffenheim’s incredible home record will be under threat and mixed with the return of Niklas Süle and Sebastian Rudy, it represents another big test for Nagelsmann.

Personally, I think Stuttgart’s trip to Schalke on the Sunday could end up being the match of the weekend. Unpredictability and promising talents make for interesting ingredients and I have a sneaking suspicion the product of this will be an entertaining contest.

One final piece of business before then is the conclusion of the summer transfer window. As I write this, Leipzig and Liverpool have agreed a fee for the transfer of Naby Keita; a deal that will see Guinea midfielder join the Merseyside club in 2018. Talk about getting your business done early!

#LFC have agreed a deal with RB Leipzig for the future transfer of Naby Keita: https://t.co/FGn44gHUx0 pic.twitter.com/7ihBUi2M3v

It does bring to an end one of the longest running transfer sagas of the summer in a deal where Liverpool finally get their man, but Leipzig are able to save face by delaying his departure until the end of the current campaign.

Another big deal completed is Ousmane Dembele joining Barcelona from Dortmund for a potential fee of €147m. As footage of Dembele in Barcelona was breaking, news emerged that Borussia had quietly stocked back up their attack, signing Ukrainian forward Andriy Yarmolenko from Dynamo Kiev.

Other movement out of the Bundesliga could see Schalke’s Benedikt Höwedes join Juventus and Bayern starlet Renato Sanches linked with a loan move to a number of different teams.

Transfer action late in the window is not how most Bundesliga clubs usually do business, but should anything else happen and to get further insight into the deals done, be sure to check out the Get German Football News podcast here on WFI.