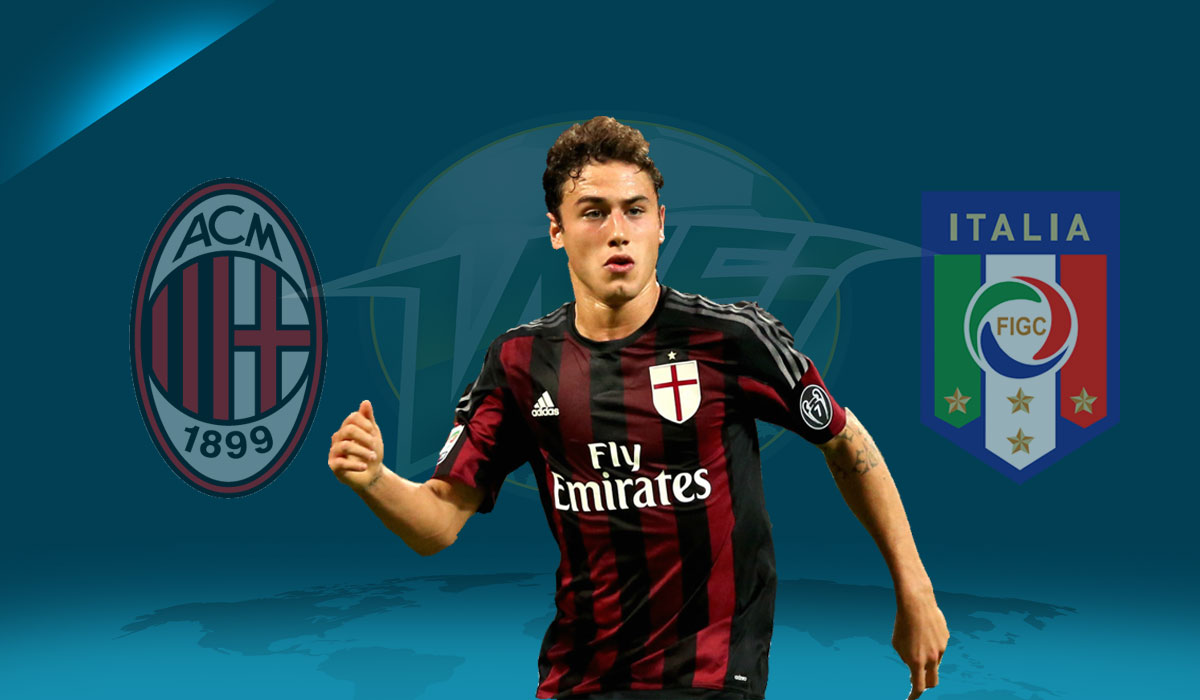 A player from the AC Milan youth system that Italian fans will know well is Davide Calabria. At only 20 years old, he is considered a future star for both Milan and the Italian national team, writes Richard Kharman.

He may not yet be on the national team, but he has made seven appearances thus far for the Azzurrini (U21s), including playing one game at the U21 European Championships.

Calabria is full of potential, but still marred with inconsistency. At different times last season, Calabria made you hopeful for a bright future; others made you wonder when Ignazio Abate would return. The hope comes from his offensive abilities.

For a game that exemplifies best Calabria’s talents and offensive abilities, you need look no further than September 19th, 2015 against Palermo. Calabria began the match on the bench as Ignazio Abate was chosen over him by then manager Sinisa Mihajlovic.

Unfortunately for Abate, in the 17th minute he had to be substituted due to a leg injury, and Calabria was called upon to relieve him on the right flank.

At this point, it was only Calabria’s second appearance for the senior squad. It is hard enough for a teenager to be asked to play in the starting lineup, or even come on as a second half sub. You are given plenty of notification that you will be going on the pitch, and you can at least prepare mentally for the opportunity.

However, when you’re not in the lineup, and a player goes down due to injury, there is no time to get ready quick enough.

That is the tall task that lay before the young Italian when Mihajlovic looked over to the bench and called on him to take Abate’s place. Calabria laced up his boots and marched out onto the pitch. To everyone’s delight, he showed no signs of fear and began attacking down the right side immediately.

Calabria was not on the pitch for even three minutes when Juraj Kucka found the streaking Calabria fleeting down the right flank. He received the pass and, in one motion, crossed a sublime pass into the box where Giacomo Bonaventura lay in wait.

Bonaventura held off the defender and backheeled a pass to Carlos Bacca who made the Sicilians pay dearly. All thanks to a great pass by Calabria. Milan had not seen many passes come from the right flank in the last couple years, as Abate was beginning to show some decline.

Calabria continued to attack all game long, trying to find Bacca and the rest of the Rossoneri attackers in the box. His passes came close several times.

In the 75th minute, a nice game of keep away between Calabria and Kucka on the outside of the box ultimately lead to the Kucka finding a cross to Bacca yet again for the game winner. Once again, the young right back was instrumental in the goal. Plays like this for the 82 minutes he was on the pitch earned him man-of-the-match honors with Bacca.

But for every good match, he has had an equally poor one. Though his commitment to the offensive side can be applauded, at times he is left out of position defensively and he leaves the defense susceptible to counterattacks.

His defensive game needs work overall. When he has played a team that dominate the ball and are methodical in attack, he reads the game well and is keen to snuff out any pass that come his way. However, teams with speedy wingers have exploited his side of the field on more than one occasion. They are able to draw him out of position and leave gaping holes for the wingers to take advantage of.

Calabria will find pitch time hard to come by this season with the signing of Andrea Conti from Atalanta. The only way for him to cure his shortcomings will be through getting on the pitch.

Hopefully he gets ample opportunity off the bench or Milan let him go on loan. Either way, the potential is there. Keep an eye out for the young fullback in the coming years.