Uth at the Double and Werner Double Quick: Bundesliga Zeitung 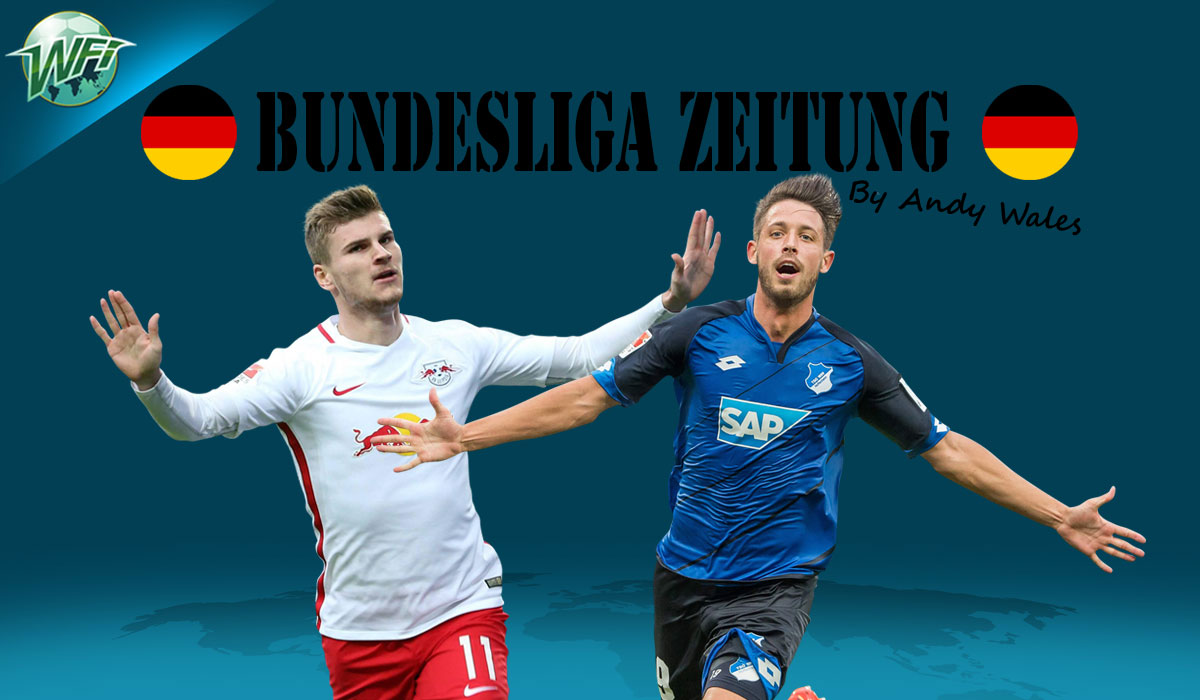 The international break meant attention in Germany switched to ‘Die Mannschaft’ and the reigning world champions maintaining their 100% record in 2018 World Cup qualifying, with a narrow 2-1 win over Czech Republic followed up by an impressive 6-0 thrashing of Norway. Thankfully though, the Bundesliga is back up and running, with Hamburger SV and RB Leipzig starting the weekend’s action off on Friday night (writes Andy Wales).

What a game it was to start the weekend: an absorbing and entertaining contest quite evenly balanced until Leipzig took the lead through Naby Keita. We also got another example in this game of how well the Bundesliga is adapting to VAR, with a penalty decision rightly reversed by the technology.

This, to me, was a match that validated Leipzig’s newfound status as potential trophy contenders, because if there were any lingering doubts as to whether or not they could replicate their form of last season, they surely evaporated with the scintillating second goal that came courtesy of a fantastic individual counterattacking effort from Timo Werner.

It’s difficult to describe the turn of pace Werner showed, or his determination to evade the HSV’s attempts to prevent him on his run; if he continues his progression, he will surely be Germany’s striker at the World Cup. To go from the Leipzig defence scrambling the ball clear at a corner, to having it nestling in the back of the Hamburg net just 10 seconds later was reminiscent of the threat Leipzig so often possessed last season. It is only fair to point out that Hamburg look a very different proposition this season and they certainly played their part in this match.

It was a case of Mark Uth at the double as the striker maintained his impressive start to the campaign by firing both goals past Bayern. There was controversy surrounding the first, with a second ball in play as quick thinking Hoffenheim caught the Bayern defence out, but no question about the validity with the second, as Uth tucked away a nice move.

Although Bayern dominated large portions of the game, they lacked their usual cutting edge, and Hoffenheim were ruthless in comparison. Despite Hoffenheim’s excellent home record, this result was a big shock, and keeps the title race wide open.

Yes, I know it’s still very early in the season, but this result will offer encouragement to the rest of the Bundesliga — and let’s be honest, it’s exactly what the league needs. I say that from both a domestic and international stand point. The Bundesliga has so much to offer, from exciting football to incredible atmospheres.

Make no mistake, it’s not that the rest of the Bundesliga are very weak, it’s more that Bayern are imperiously strong, but their defeat presents opportunity elsewhere and will doubtless leave Dortmund all the more frustrated at their goalless draw away at Freiburg. Despite their best efforts, it simply wouldn’t go in for Dortmund, and although they currently sit top on goal difference, those two dropped points could prove costly later in the campaign.

Looking ahead to the next round of fixtures, Hamburg once again are the subject of Friday night football and I, for one, will be interested if they can bounce back from the defeat to Leipzig, and if opponents Hannover can maintain their excellent start to the season.

The Saturday evening match will be intriguing, with RB Leipzig playing host to Borussia Mönchengladbach, who have been a mixed bag thus far.

The biggest match of the weekend will be on Sunday, where Köln must try and kickstart a disappointing campaign away at Dortmund. After surprising many by (arguably) overachieving for the past two seasons, Köln currently find themselves rock bottom of the Bundesliga on zero points and will be determined not to lose again.

So, aside from the element of regional rivalry, this will be an important fixture for Peter Bosz, especially if they hold serious title ambitions. Considering how Dortmund failed to overcome the resolute ten men of Freiburg, this could be a telling test against a Köln side likely to be set up to frustrate Dortmund and get their first points of the campaign.

So, if gameweek 3 in the Bundesliga saw Bayern stumble, the question for gameweek 4 will be: can their rivals take advantage and keep the title race open?