Der Dino Is Down, But Not Extinct – Bundesliga Zeitung 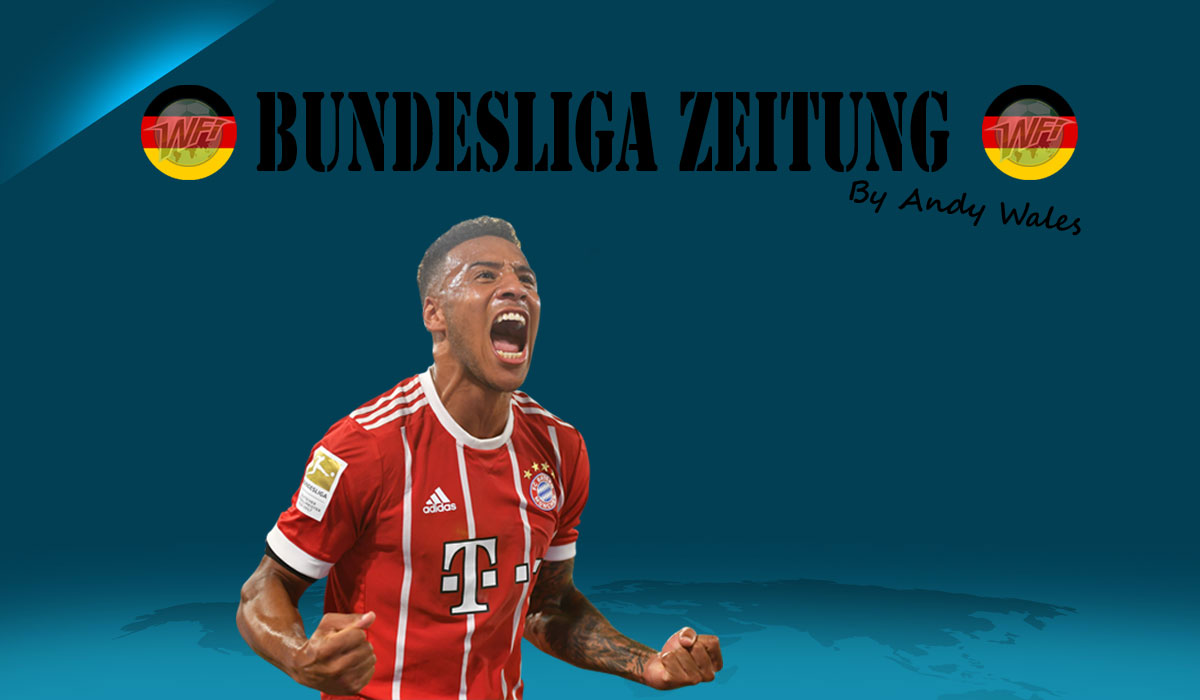 This Bundesliga Season continues to have more twists and turns than your favourite espionage novel. Dortmund’s strong start to the domestic campaign and five point lead at the top has quickly become a distant memory (writes Andy Wales).

After throwing away a two goal lead against Eintracht Frankfurt this past weekend and having to accept a draw, the rejuvenated Bayern Munich have joined them at the top, with only goal difference keeping Dortmund’s nose in front.

For Bayern, the return of Jupp Heynckes has seen a return to form, with three wins from three games and no goals conceded, including their mid-week Champions League win at Celtic. Hamburg were their latest victims, but the Dinos will take plenty of heart from the 1-0 the nature of their defeat on Saturday, as well as the performance.

Hamburg will understandably feel aggrieved at the sending off of Gideon Jung for a foul on Kingsley Coman that really should only have been a yellow. It would be reasonable to expect Bayern to have come out on top, regardless of numerical advantage for 51 minutes, but Hamburg gave a gutsy enough performance to suggest that, just maybe, the hosts might have got something from the game, had it remained 11 v 11.

The short range tap in from Corentin Tolisso gave Bayern the points they came for, but considering this tie has recently been one where the champions plundered goals, Hamburg should consider the fight and togetherness they showed as a platform for some vital upcoming fixtures.


Hamburg is a big club with genuine pedigree that includes a European Cup, back in the days of Kevin Keegan. Those days are long in the past though and this giant has been stumbling on the edge of falling into the 2 Bundesliga all too often over the past few years.

Indeed, in recent seasons, the relegation play-off position has almost become their own. The club’s recent struggles have seen them go through an eyebrow raising seven Head Coaches in just four years. They proudly still hold the record of never being relegated from the Bundesliga, but the attempts to recapture the glory years have been replaced with a clamouring for survival.

After a positive start to this season under Markus Gisdol, things have recently slipped back to the all too familiar fight near the bottom, but do remain in touching distance of Freiburg and Wolfsburg above them. If Hamburg can take the desire, fight and tenacity they showed against Bayern into their crucial battle with Hertha Berlin this weekend, they stand a chance of climbing away from the dreaded relegation zone.

Those relegation spots currently belong to Werder Bremen and Köln. Those two met on Sunday and, perhaps unsurprisingly given the circumstances, it ended in a stalemate. Although it was not a match short of shots, it was short of any goals.

Perhaps the defining moment of the game was Köln’s Sehrou Guirassy somehow managing to miss an open goal from one yard out. Word is, he threw his shirt into the home fans after the game, but they promptly threw it back. So, he threw it in once more and again, it got thrown back to him. Perhaps a tinge of humour, mixed in with disappointment for Köln fans.

Nightmarish, Koln and Werder Bremen, winless each, meet each other, and play to a 0-0 draw, ohhh the humanity #bundesliga pic.twitter.com/zRe7TSBpCS

That miss epitomises this campaign for Köln: the delight of playing European football for the first time in a quarter of a century has been diluted with an unrelenting run of negative results.

Coach Peter Stöger may come under pressure if things do not turn around, but it was sporting director Jörg Schmadtke who paid the price. He was the man credited with recruiting Anthony Modeste and ultimately, the man responsible for failing to replace him and that poor summer business is what’s thought to have been his undoing.

Failing to beat fellow strugglers Bremen at home, with such a great chance to do so, points to things unlikely to take an upturn any time soon. This weekend they make the short trip away to face an in-form Bayer Leverkusen and their only hope may be the local derby element.

With Freiburg getting a good draw at home to Hertha Berlin, they sit one point above Hamburg and go to Stuttgart on Sunday. Freiburg have looked pretty poor this season, but with Bremen and Köln struggling at the bottom and Wolfsburg, Stuttgart and Hertha all within touching distance above them, the relegation fight promises to be as competitive as the title race right now.

The remaining European football fixtures over the coming weeks could yet have an influence at both ends of the table, something I will look at in next week’s column.