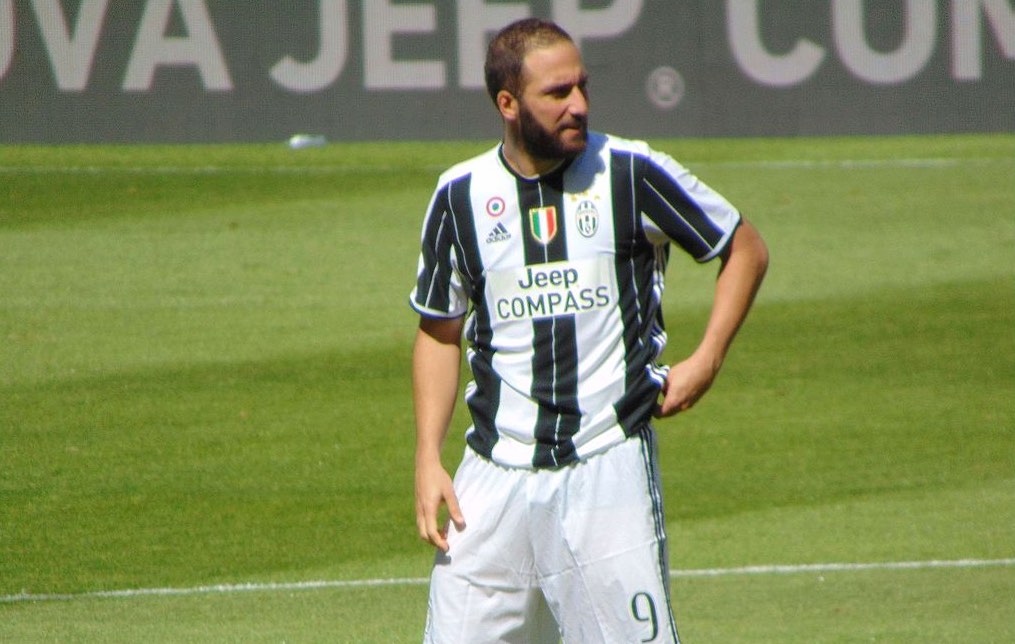 A striker that provides goals wherever he plays, be it at Real Madrid scoring 122 goals between 2007–2013, or breaking a 66-year-old goal scoring record in Serie A for Napoli during the 2015/16 season with 36 goals, (writes Graeme Scott).

It was those 36 goals in Serie A that convinced Juventus to break their own record and splash out €90 million to make Higuaín their record transfer signing (and the highest fee paid in Serie A for a player), a fee many regarded as overpriced.

It could be argued that, if Juventus had not spent so much money bringing the player to Turin, the criticism of him would not be so prominent.

Fortunately for Higuaín, he would soon respond to his critics by scoring the match winning goal on his debut against Fiorentina, and end the season as Juve’s top goal scorer with 32 goals.

Then the 2017/18 season began. At first, there were few complaints; Higuaín once again started the season by hitting the back of the net, this time during Juve’s 3-0 win over Cagliari, and then again on match day three against Chievo, making it 2 goals in 3 games.

So far, so good. But then a Messi away trip to Barcelona happened, where, despite an encouraging first 45 minutes by Juventus, all that changed once the second half kicked off, as Barcelona would go on to defeat the Old Lady 3-0. And so, the criticism of Higuaín began once more.

Higuaín has been in this position before. When criticised back in August 2016 over his physique, the Argentine responded with a goal and a message for his critics: “It is better if you keep saying I’m fat, I will continue to score goals”, and score goals he would, whether it be against former club Napoli, the derby against Torino, or most notably in Juve’s 2-0 win away to Monaco in the Champions League semi-final.

Higuaín: “It is better if you keep saying I’m fat, as I will continue to score goals”
21 GOALS FOR THE SEASON
Joint TOP scorer #pipita #Juve pic.twitter.com/wyF9CeAdh0

However, there was no denying that, with only two goals in his opening seven matches, the Argentine’s goal scoring ways looked to have deserted him, leading fans and former Juve players such as Fabrizio Ravanelli to laying in the criticism, even going as far to suggest that Higuaín sit out the upcoming game against Torino. Yet one man standing by the striker has been his manager, Massimiliano Allegri.

Speaking after the recent 1-0 win over Fiorentina, Allegri had this to say about his striker: “He moved well and gave positive signals, so he needs to stay calm. Even last season, he did not score for three or four matches. I don’t see it as significant. He needs to react in a positive way by turning this negative moment into a positive one”.

Even the former fitness coach of Napoli, Corrado Saccone, has come to the defence of Higuaín, adding: “In a moment like this, all it will take is just a little chink to unblock things. In the year of 36 goals, the first went in off his back if I remember, and we all know what happened then! If I were the Juventus fans, I wouldn’t be worried, his time will come”.

However, his time would not come in the Turin derby, as Higuaín found himself on the bench. Was this due to his poor form in front of goal? Or was it simply a case of giving an under-pressure player a break, as Allegri stated when questioned on his decision?

“Tonight I preferred to leave him out,” Allegri said.

“He has already scored two goals this season and will score many more. He just needs to rediscover – or perhaps he never lost it – the calm of not feeling the need to score at all costs”.

Allegri: Squad rotation is normal, Higuain is not a problem https://t.co/HwWFPPpcH0 pic.twitter.com/I3cE4jKZu4

Juventus would go on to defeat their neighbours Torino 4-0, largely thanks to a dominant performance, which was helped along the way by a Baselli red card.

Higuaín arrived onto the pitch for the final ten minutes, not much time for any striker to leave a mark on a football match, but the signs were there that his fortunes were looking to change, as he eagerly made runs into the penalty area, asked for the ball at every opportunity, and assisted his compatriot Paulo Dybala for the Bianconeri’s fourth goal. But still, that elusive goal for Higuaín never showed up.

Four days later, Higuaín again found himself starting from the bench as Juventus took on Olympiacos in the Champions League. Sixty minutes into the game, with the scoreline goalless, Higuaín was called from the bench once more with an ever-increasing expectation.

It was to prove a game changer, as nine minutes after his introduction, Higuaín finally scored the goal he had been waiting for, and after the weeks of criticism and missed chances, it was clear how much the goal meant to him.

“I felt a rush of joy – it was one of the best moments of my career,” Higuain said after the match.

His teammates chimed in, too: “Gonzalo changed the game when he came on,” Andrea Barzagli said. “We weren’t worried at all because we know how good he is”.

“He’s a match-winner and this is going to be a big season for him,” Allegri added, adding to the positivity around their record signing.

To confirm to his doubters that he had returned to goal-scoring ways, Higuain would find his name on the scoresheet once again in the following match, scoring the second goal in a 2-2 draw away to Atalanta.

With his goal drought firmly behind him, Higuaín looks back on track, and he is reminding fans that in football, the old adage rings true that form is temporary, class is permanent.