Jupp Heynckes Is Back And So Are Bayern – Bundesliga Zeitung 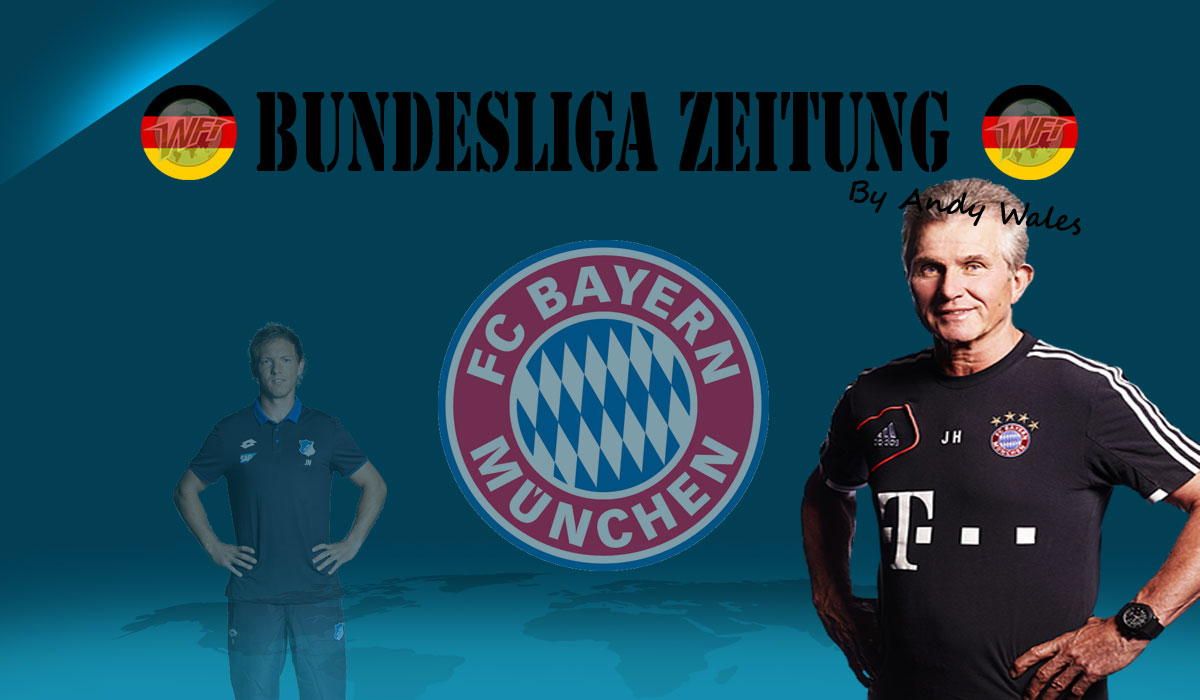 It was another international break for the Bundesliga, but rather than attention being on the National team continuing their incredible 100% record in qualifying for next year’s World Cup, focus was still on Bayern Munich (writes Andy Wales).

After the furore of Carlo Ancelotti’s sacking and the public inquest into the whys and wherefores of the decision to dispense with the highly respected Italian coach’s services, so early into the season; talk quickly switched to the identity of his successor.

The early favourite was former Mainz and Dortmund boss, Thomas Tuchel. Talks between the two parties were understood to have taken place, but it was rumoured that discussions between Bayern’s decision makers and contemporaries at Dortmund took place and did not shine a positive light on Tuchel. Whether or not this is true or had any influence on the decision to not to peruse appointing Tuchel remains to be seen. What is more apparent to me is that Tuchel as a short term solution would have been an odd choice for both parties.

Initially, he did well at Dortmund, but I found his fascination with tactics became an over indulgence. Progressive change through evolving is a good thing, but change for the sake of change, not so. Talk of an unsettled dressing room hastening his departure from Signal Iduna Park would hardly have helped his cause either, given the discontent within the Bayern squad.

Tuchel is undoubtedly a talented coach and an ambitious one too, so being a stop gap is not the ideal next step for his career. He needs a club willing to give him time to build and develop as a coach and I don’t think Bayern is the place for that at this stage.

Hoffenheim’s up and coming coach Julian Nagelsmann had already been touted as a future Bayern boss and speculation started as early as this past summer that the hierarchy at the Allianz were eyeing up a move to appoint him next year. Perhaps this played a part in Tuchel not being appointed and I suspect we may find out over the coming months.

The stories of Nagelsmann being the long term option for Bayern were given further substance when it emerged Tuchel was no longer in the running and rumours began to surface that the champions had turned to a former boss to step into the breach and see them through this campaign. Jupp Heynckes, who retired after leading Bayern to a historic treble in 2013, was the man unveiled to bring calm and unity back to the club.

At this stage, it seems an inspired choice as Heynckes is still a popular figure with senior players and a man steeped in the traditions of Bayern Munich; he knows how to handle the egos in the boardroom as well as those in the dressing room. If Heynckes can reunify to the dressing room, as most expect him to and also quell the dissenting voices from higher up, Bayern will be in a much stronger position to appoint a young coach like Nagelsmann.

After the pleasantries of his unveiling, Heynckes’ first order of business was to welcome Freiburg to the Allianz. Unfortunately for the visitors, they were lambs to the slaughter. It was as if the veteran boss had never been away and a convincing 5-0 victory quickly restored the feel good factor. Undoubtedly, there will be tougher challenges ahead; including RB Leipzig at the end of this month, but for now, Bayern seem to be back on track.

For Bayern, the weekend got better still on Saturday evening, thanks to Leipzig and their victory away at Dortmund. How quickly things change in the Bundesliga, with Dortmund’s five point lead at the top cut to just two. It was the first Bundesliga defeat of the season for Peter Bosz’s side and incredibly, their first home defeat in the league for 41 games, a record that stretched back to April 2015.

Despite a brace from Pierre Emerick Aubameyang, who leads the goalscoring charts with 10 goals, Leipzig worked extremely hard for their 3-2 victory in the sort of performance that brought them their success last year and has them right back in this title race. All of this with the luxury of leaving star striker Timo Werner on the bench in a pulsating game that saw two red cards, as well as the five goals.

From the top of the Bundesliga, next week I will be concentrating more on the action and drama unfolding near the bottom. FC Köln continue to struggle at the foot of the league, whilst Hamburger SV’s bright start to the season has lost its shine and are now back in familiar territory.

This weekend, Köln face fellow strugglers Werder Bremen, Hamburg have the unenviable task of going away to the resurgent Bayern. With Freiburg taking on Hertha Berlin, it may be an opportunity for Wolfsburg to pull away from trouble, should they overcome high flying Hoffenheim.

Add all the European action into the mix and it promises to be another intriguing week ahead.