Italy’s Next Wave of Great Managers – The Calcio Consultant 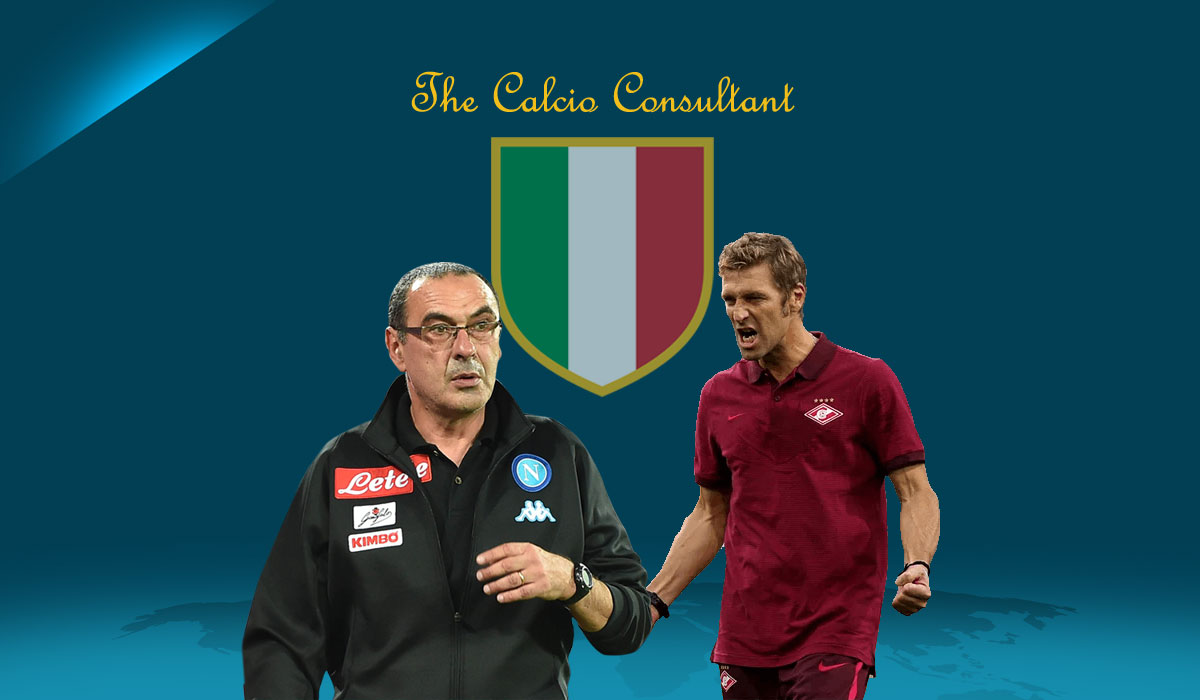 Wine, food and fashion —  just some of the things Italy does well.

Within calcio, Italy have a mass production line of goalkeepers, defenders and (at times) strikers.  It is also clear that Italy have produced some of the game’s great managers, especially in the last 30 years.

Arrigo Sacchi’s Milan were the best in the world during their heyday, and remain in the discussion in regards to being the greatest club team of all time.  Marcello Lippi won everything there is to win — all club honours with Juventus, and a World Cup with Italy.

Fabio Capello took the baton from Sacchi at Milan and ran with it, as well as win at Juventus (I know- Calciopoli), Roma and Real Madrid, who may not have liked him very much, but he won them two La Liga titles.  Roberto Mancini won trophies at five different stops, including winning the Premier League with Manchester City.  There is also the unfathomable, with Claudio Ranieri managing Leicester City to the unlikeliest of Premier League titles.

Carlo Ancelotti has won league titles in five different countries.  Five.  He’s also won the Champions League three times.  Antonio Conte has won titles in Italy and England, certifying him as a fully paid-up member of the fraternity of great Italian managers.  Massimiliano Allegri has also worked his way into this group by winning Scudetti with Milan and Juventus, as well as reaching two Champions League finals with the Bianconeri.

The production line of talented managers is showing no sign of stopping either.  The Scuola Allenatori (The Managers’ School) at Coverciano certainly has its magic.

As Allegri and Conte continue building their resume – and it should be expected Ancelotti will be back on the touchline soon – another crop of Italian managers are coming through and making their mark on the game.  Here are five managers who are building their foundations, with each potentially on their way to adding to the unparalleled legacy of great Italian tacticians.

The 53-year-old was actually handed the Spartak hot seat after his predecessor resigned, when they were eliminated early in Europa League qualifying.  Formally a caretaker in the 2016/17 season, Carrera guided Spartak to a Russian Premier League title, going seven points clear of city rivals CSKA.  The Russian champions extended Carrera’s contract through the end of the 2018/19 season as a result.

He has Spartak off to a decent start in league play this season, with a well-earned 1-1 draw at home to Liverpool in the Champions League group stage.  Carrera is an understudy to Antonio Conte, and his style of play is quite similar, though in formation Carrera prefers playing a 4-2-3-1.

His only other experience in charge was when he had to serve as caretaker manager at Juventus when Conte was serving a suspension.  In that brief tenure, Carrera went unbeaten in ten matches, winning seven and drawing three.

Carrera’s updward mobility could lead him to become: A future manager at Juventus.  He played there and worked there under Conte, and Carrera’s personality would be a great fit at the J.  He’ll be on the Old Lady’s shortlist of managers whenever the day comes for Massimiliano Allegri to move on.

Massimo Carrera with that 5-1 win against Sevilla #Goals pic.twitter.com/MjlZ3qzFyW

After years of bouncing around some of the more provincial clubs of Italy, Giampaolo seems to have found a place where he can hang his hat.  Samp owner Massimo Ferrero exercised patience with his manager through the first half of the 2016/17 season, and Giampaolo ultimately rewarded him for it.

When the second half of that season began, Sampdoria suddenly looked unbeatable, and for a while they actually were, going on a lengthy unbeaten run including two wins at the San Siro over both Milan sides.  The Blucherati were able to finish in the top half after their disappointing start.

This season, Sampdoria have wins over Fiorentina, Milan and Atalanta in an impressive start, and they find themselves in 6th at the time of writing.  Under Giampaolo’s watch, Samp line up in a 4-3-1-2, where defensively they are difficult to break down centrally, and going forward they are very entertaining.

Giampaolo’s upward mobility could lead him to become: A future manager of the Italian national team.  I am a big fan of Giampaolo’s man-management and his ability to interchange players without much of a drop off — two traits that can prove very successful in international football.

This resume truly speaks of a manager who is self-made.  After stops at smaller clubs, Di Francesco took the opportunity at Sassuolo.  The first stint didn’t go so well and he was sacked, but then recalled after a little over a month when things weren’t getting any better.

Di Francesco rescued the Neroverde from relegation that season, and in his second stint at Sassuolo, he lead them to a 6th place finish in 2016, qualifying them for the following season’s Europa League.  Di Francesco cashed in on this successful run at the MAPEI Stadium and accepted the challenge as manager of Roma.  In the Eternal City, he hasn’t changed his philosophy —  Di Francesco favors an attack-minded 4-3-3 system, where full backs and wingers are very prominent in creating scoring chances.

In a short period of time, his effect on the players of the Giallorossi has been positive.  Defensively, Di Francesco has shown flexibility, but largely they defend zonally and look like a 4-5-1 when doing so.

Di Francesco’s upward mobility could lead him: In Italy, to Juventus or Milan, though some bigger spending clubs abroad could take an interest in him.  It almost feels like Roma is a destination job for Di Francesco, so a lot would depend on his desire to take on something bigger.  Still, if he can generate success at Roma with the attractive style of play he favors, he will inevitably attract interest from elsewhere.

At 41-years-old, Simone Inzaghi is the youngest of the managers featured here.  A Lazio lifer, Inzaghi began coaching in the youth system of the Biancacelesti and then took the manager role as a caretaker at the end of the 2015/16 season.

Lazio weren’t certain of him being the man for the job long-term and initially hired Marcelo Bielsa for the 2016/17 season.  However, Bielsa abruptly quit, leaving Lazio’s ownership to hand the reins back to Inzaghi.

He has not disappointed.  Under his guidance, Lazio finished 5th in Serie A in 2016/17.  In doing so, Inzaghi has resurrected the career of striker Ciro Immobile, and made stars out of players such as Felipe Anderson, Lucas Biglia and Keita Balde.  Biglia and Keita left over the summer, and rather than panic buy to replace them, he’s maximized the talents of Sergei Milinkovic-Savic and Luis Alberto, among others.

He’s turned Lazio into a bogey team for Juventus, beating them in the Supercoppa this season and ending Juve’s Serie A home unbeaten run that dated back to 2015.  Inzaghi has built this season’s Lazio in a 5-3-2 formation, with Luis Alberto becoming an ideal partner for Immoblie, with Milinkovic-Savic pulling the strings in midfield.

Inzaghi’s upward mobility could: lead him just about anywhere at this point, but given how long he’s been at Lazio (since 1999 as player and manager), he might be at his destination.  There’s always a temptation to try something new, and at 41, Inzaghi has a lot of coaching left in his career.

There is no way this list can be valid without Maurizio Sarri on it.  The tactician for the Partenopei, interestingly enough, is at his 18th stop as manager.  His first was way back in the 1990/91 season as manager of USD Stia, a very small Tuscan club (which is much as I could dig up on them).  Far more self-made than the others on this list, Sarri spent the early years of his managerial career working as a banker, with managing smaller football clubs being a supplemental means.

Sarri would ultimately focus on managing full-time, and after a number of stops, he would take over Empoli in 2012, guiding them to promotion from Serie B.  With Empoli in Serie A, he gained attention with his team’s attractive attacking style to the point where he succeeded Rafa Benitez at Napoli to start the 2015/16 season.

His tactics at the Partenopei are in correlation with Serie A’s revolution as an open, attacking league, and not necessarily the cliched catenaccio style of decades past.  A second place finish in 2015/16 (with Gonzalo Higuain setting a single-season goalscoring record) and a third place finish in 2016/17, Sarri’s Napoli scored 174 goals in those two seasons!

At the time of writing, Napoli have played eight, won eight to start the 2017/18 season, scoring 26 goals in the process, which puts them on pace for scoring 124 for the full season.  Sarri’s teams are ruthless going forward, with just enough defending and ball-winning in defense, and they largely line up as a 4-3-3.  In his time at Napoli, he has molded Lorenzo Insigne, Dries Mertens, Jorginho, Jose Callejon and Marek Hamsik into a must-watch whenever they play.

Sarri’s upward mobility could: Land him at a big spending club whose owners want to be entertained and give him all the funds he needs to be successful.  It’s frightening to think what Sarri could do with the attackers at PSG, for example.  He is 58-years-old, so if that opportunity comes along, it may be a destination.  Naples born, however, he may be right where he wants to be.