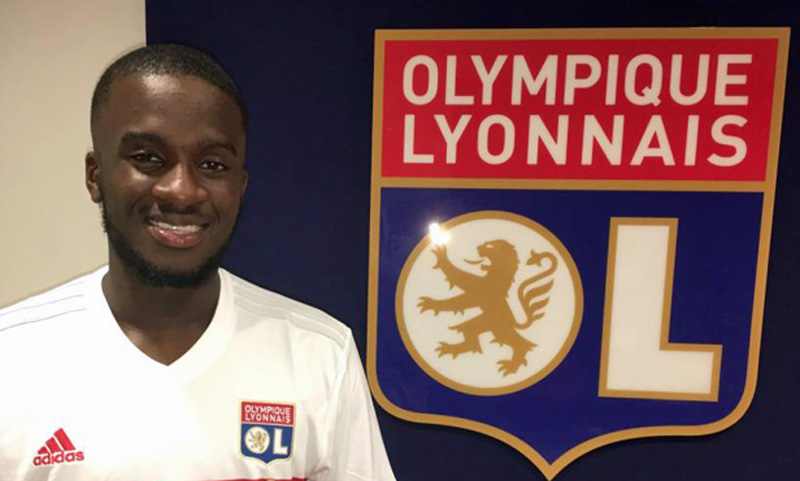 At the end of the 2016/17 season I was interested in looking at the teams which had the potential to get promoted from Ligue 2 into the main division in France and, as I’ve known Sochaux for quite some time having watched them years ago because of Ryad Boudebouz or Marvin Martin, I’ve picked up their game vs Amiens at the end of May. To my luck, I’ve picked a game where Tanguy scored 2 goals and dominated the game as part of the midfield duo in a 4-4-1-1 system, playing box-to-box, and just being all-round spectacular.

Ndombele was born in France in 1996 and went through the youth teams of FC d’Épinay Athletico, E.S.A. Linas-Montlhéry and Guingamp (where he spent the very important years from the age of 14 until the age of 17 – when he headed to Amiens).

From the day he arrived at Amiens he spent time with the b-team before being promoted to the first-team squad for the 2016/17 season.

Here is a match to match overview of his performances through stats, it also includes the positions he’s played, and in which formation.

So what type of player are we looking at if we are looking at Ndombele? There isn’t really a player I would want to compare him to, apart from a probably very wild shout – that he can resemble Zinedine Zidane in terms of the dribbling and skills he is able to pull off.

He is mainly a central midfielder, and can be used in multiple systems and on either side due to his immaculate ability to adjust into any situation or position at the pitch.

Tanguy Ndombele vs Monaco. Dominant display from the youngster. pic.twitter.com/pEgCSwqLep

What I mean by that is that players are usually confident in a certain area of the pitch, and when they get somewhere else (e.g. typical central midfield player suddenly appearing by the touchline in a winger area) they really don’t know how to react, adjust and execute what is needed to be useful for their team, or they simply keep it simple so they can rotate back to their “safe space”.

Ndombele is different. His first thought is always to make some progress for his team and relieve the pressure they may be under by taking on the responsibility. He can do this by taking a player on inside his half, trying to beat his marker in the final third to break the lines, or simply by applying pressure in a smart situations such as when the receiving player is turned with his back towards him and he has element of surprise on his side.

This all comes also from his experience of playing a number of roles across the last season – either as a central midfielder in a double pivot, playing a wide midfielder in a four-man midfield, or playing as the second striker. He has the technical and physical attributes to make himself work very well in all of those positions.

But his biggest influence on the game will always be from the centre of the pitch, due to his decisiveness, aggressiveness, incredible dribbling, and courage to try passes. Passes which are risky, passes which at times won’t work may backfire, but I would personally always choose the player who focuses on the reward in a risk/reward situation.

When it comes to the defensive side of things he is very mature, composed and positionally sound. He reads the game very well and is able to adjust very well as to where the danger may come from, or read which passing lines the opposition want to open.

This was visible in the game vs Paris Saint-Germain where he’s played 72-minutes, and after he left, PSG scored both goals. These goals were not necessarily the fault of the player playing in his place, but more of the fact that PSG didn’t really create much in the whole game through the middle thanks to the perfectly functioning partnership of Tousart & Ndombele, who expertly covered the space in front of the defence and the edge of the box when there were crosses coming in from the wide areas.

One thing which stands out in Ndombele is his dribbling. During the previous season in Ligue 2 he finished the whole season with 70.1% success. For example at the moment, there are 27 (including Ndombele 76,4%) players with 70% success rate or higher and only 6 of them plus Ndombele have over 20 completed, which is phenomenal.

The thing that is so exciting about his dribbling is that he combines the 3 most important elements – speed, strength and skill/technique. He has an outstanding burst of pace from standing position, brilliant upper body strength when he gets shoulder-to-shoulder, and some ridiculous arsenal of skills or tricks he can use to beat his opponents.

He has all of this and at times, he can look awkward. It’s as if he’s the third long lost brother of the Mamadou Sakho / Blaise Matuidi school where the player looks awkward on the ball while also possessing world class technique.

Reading all of that, he really sounds like the perfect midfielder, doesn’t he? He sounds like what tesseract is to a cube in terms of what he is as a midfielder to a normal midfielder. Ndombele has it all, in a way that he sounds like a player on the Paul Pogba, Naby Keita level of completeness, and he very well can be if everything works out the way it could.

With midfielders it is much harder to predict whether they will become as great as they can potentially be, because midfielders are the most prone to not performing at their top level consistently, which eventually leads to them being written off, or at times the exact opposite – perfect example of this is Renato Sanches.

Midfielders and central midfielders (let’s now talk midfielders in the mould of Emre Can, Luka Modric, Pogba, Claudio Marchisio – more or less those who seem like box-to-box players in their attributes and strengths) especially are involved in ridiculous amount of 50/50 situations which can be influenced by ability but at times are mainly decided by luck.

You are running at full speed, take a bad touch and bounce the ball a bit further than you wanted, it hits the defender in front of you but bounces back to you and you get past him and basically beat him one-on-one. That’s something which was happening at an extreme rate to Sanches, and is what made him look so great and mature, because the game just felt naturally gifted to him, when in reality, in most cases it was luck.

That’s what can happen with Ndombele – he can lose confidence, try a few of those risky-outside of the boot 30-metre long passes in behind which won’t work, and stop trying them altogether to prevent himself from looking bad and become average.

He can try to take on someone and fail once, twice, or thrice in a row and stop trying, instead choosing to keep it simple. But the biggest reason I’d actually write this about him is because I’ve seen him fail those passes, I’ve seen him fail miserably when trying to dribble past someone, and even seen him ridiculously tripping over the ball without any action from the player defending him. But he always got up and did it better the next time. That’s the reason why he has the potential to become a special player at the top of the game.

Jan is a football scout and former youth futsal player at Slavia Prague.