‘There’s A Dog On The Pitch!’ – And Other Football Miscellany 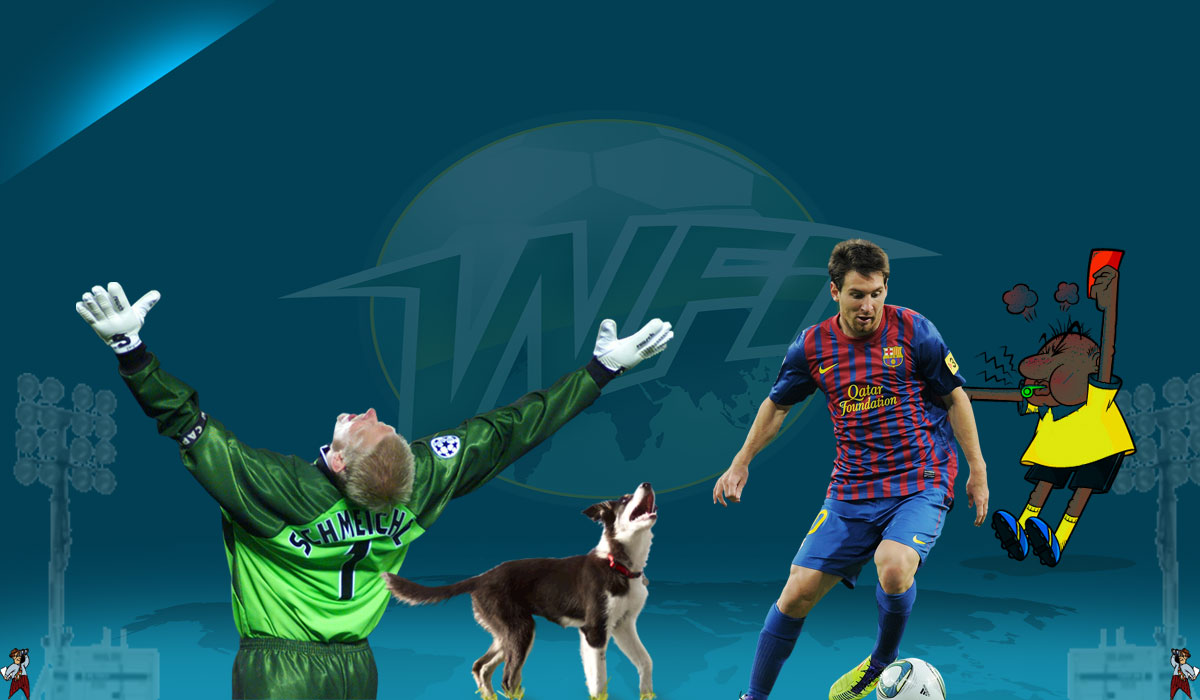 Occasionally, things happen on a football pitch which give the fans a strange sort of joy – whether it’s an animal on the pitch, a comedy own goal or a fight between teammates (writes Chris Henderson).

Moments like these show how close elite football is to the jumpers-for-goalposts, headers-and-volleys game which every young footballer grew up with.

Here are 10 moments which give the game an old-school feel and make supremely talented footballers seem, well, just like one of us.

1. Keeper going up for a corner

A goalkeeper heading up for a corner in the dying minutes perks up any match. It makes you nudge your friend in the pub and say, “Hey look! The keeper’s up!”.

It’s rare for this to lead to a goal, but it’s still entertaining to see the defending team make a break-away as the goalkeeper races back like an extra from a Benny Hill parody.

Peter Schmeichel scored 11 goals during his career, including one for his national team. Although the prize for the best goal goes to Baroka FC goalkeeper Oscarine Masuluke, who scored an audacious 96th minute overhead kick in the South African top-flight last year. The goal sparked wild celebrations and earned him a nomination for the Puskas Award 2017.

It’s the same joy as when a dog somehow ends up in your school playground. A dog on a football pitch seems to happen less often than in the 1970s.

A song title by Half Man Half Biscuit neatly sums this up, “Even Men With Steel Hearts Love To See A Dog On The Pitch”.

In April this year, a dog interrupted play in a Northern Premier League match between Halesowen Town and Skelmersdale United.

Dusty, a pet dog owned by one of the players, halted play for nearly 10 minutes, as players tried but failed to catch him. His owner, Asa Charlton, later said the only way to distract Dusty was with bacon: “Somebody got food out which is the only way we’ve been able to get him after running about.”

3. Streaker on the pitch

A highlight of this genre is when the streaker escapes the attention of stewards as he or she darts around the pitch.

A friend of mine once ran onto the pitch at the Riverside Stadium after a late Ugo Ehiogu winner. To this day, he cherishes the photo of him celebrating with his idols.

Sometimes, the knock-on effect can be worse than a £200 fine and a night in the cells.

On Valentine’s Day 2009, in an FA Cup tie between Blackburn Rovers and Coventry City, 20-year-old James Miller ran onto the pitch in his underpants. As a romantic gesture to his girlfriend, he was dressed as Cupid, firing love arrows and roses at the Coventry City players.

The extra injury time meant that Chris Samba scored a 95th minute equaliser to set up a replay. As for his girlfriend, she ended their relationship.

“He must think it’s funny, but after that I didn’t want anything to do with him. If he thought I would be impressed then he must be more stupid than he looks.”

Quinn even saved a penalty for Manchester City up against Derby striker Dean Saunders. Windass also faced a missed penalty – before it was taken, Windass said to his opponent, Matty Fryatt, “you’re gonna let your family down now”. Surprisingly, Wright-Phillips proved one of the most adept.

Seeing an outfield player in goal is always a joy, and will inevitably result in fans shouting “shoot!” whenever a player has the ball.

The reverse of this is the rare occurrence of a goalkeeper playing outfield, as David James did for Manchester City in 2005. Despite the disaster this turned out to be, it was no less hilarious to see James gangling around up front looking baffled whenever the ball came near him.

Despite the old adage that the best referees are the ones you don’t notice, some have strayed away from that mantra.

Mike Dean, who is perhaps more noticeable than most referees in the Premier League, was sarcastically congratulated by Jose Mourinho for a “fantastic performance” after his side lost to Sunderland.

Referee Matt Massias once accidentally did what most other officials can only dream of – giving pantomime villain Robbie Savage a swift back-hand across the face.

In contrast, Lionel Messi used a referee who had strayed too close to the action to his advantage.

Mid-dribble, Messi used the referee as a shield to fox a Celta Vigo midfielder, who then allegedly shouted, “Which game are you watching, referee?”

To which the obvious response is, “The one where you just got embarrassed by the world’s best player”.

6. A foul on a player running the clock down

This is a niche event where the rules of the game seemingly no long apply. As a neutral fan, seeing a player casually take the ball towards the corner flag causes an irrational sense of rage.

If it was your own team in a crucial derby game, for example, you’d be chuffed to see it happen. But not you, son. No way.

In desperation, the defending player often laces the time-wasting forward with an old-fashioned ‘reducer’.

What adds to this is that the linesman rarely awards the attacking team with a throw-in / foul / corner due to some warped concept of sportsmanship.

Cue outrage by the attacking player for less than half a second before he has to dash back to help his team defend.

This act seems to be monopolised by the old-school, no-nonsense centre-backs in the mould of John Terry and Terry Butcher.

The most famous incident is Phil Babb’s attempt to stop Chelsea’s Pierluigi Casiraghi scoring at Anfield in 1998. As the ball rippled the net, Babb skidded, legs apart, full-blast into the post. It makes every man shudder at the mere thought of it.

On the other side of this coin, a cynical foul as the ‘last man’ which results in a red card but only a free-kick. Ole Gunnar Solskjær is the stand-out example – in 1998 he got sent off for a cynical foul on Rob Lee with the Newcastle man bearing down on goal. Sir Alex Ferguson later fined Solskjær for his efforts, but he was given a standing ovation by the Old Trafford faithful.

Nothing can reduce a fantastic player down to a pub-level footballer like missing in an open goal.

Nick Hancock and Danny Baker made the stand-out bloopers videos of the 90s. Their work featured a series of misses so unbelievable you had to rewind to watch them again. One featured Hancock’s brilliant commentary, “he’s clear, he’s clear, he’s…clearly a tw*t.”

Ronny Rosenthal is the champion of this genre – his famous sitter against Aston Villa in 1992 is still revered as one of the Premier League’s most amazing misses.

Some of the finest footballers in the history of the game have been guilty of astonishing misses. The beauty of not being a professional footballer is that a catastrophic error will never end up on a bloopers compilation.

Several matches over the years have suddenly been plundered into darkness, with the crowd standing helpless in the stadium.

This was long before the days of smart phones with lights on them. Caused by Asian betting syndicates, the floodlight incidents were shocking because of how easy outside forces could infiltrate the Premier League.

After West Ham’s Frank Lampard scored an equaliser in November 1997 against Crystal Palace, the floodlights went off and the game was abandoned.

A month later, the same thing happened during a Wimbledon vs Arsenal match.

The syndicate tried for a third time, at a Charlton vs Liverpool match, but their plan failed. The security guard who was bribed to trip the lights told his colleague who then reported it to the police. Four men, including the Charlton security supervisor, were jailed for between 18 months and four years.

With such an array of egos in any top-flight team, it’s inevitable that things sometimes bubble over. There have been countless examples of team in-fighting.

Not so lucky for Kieron Dyer and Lee Bowyer, who were both sent off for their scuffle. Dyer has since said: “As he was raining punches in, I thought ‘You need to get on the weights because they aren’t hurting.'”

Alan Hansen didn’t see the funny side, describing the incident as ‘another stain on the game of football’

In a training match during the 2002 World Cup, Olof Mellberg had a comedic scrap with Fredrik Ljungberg after a mistimed tackle. Little damage was done as the pair rolled around on the ground in a comedy fashion. Mellberg said: “You can’t put a positive spin on what I did. It is nothing to be proud about. It was stupid.”

A foolish act by both men, but also hilarious to watch.