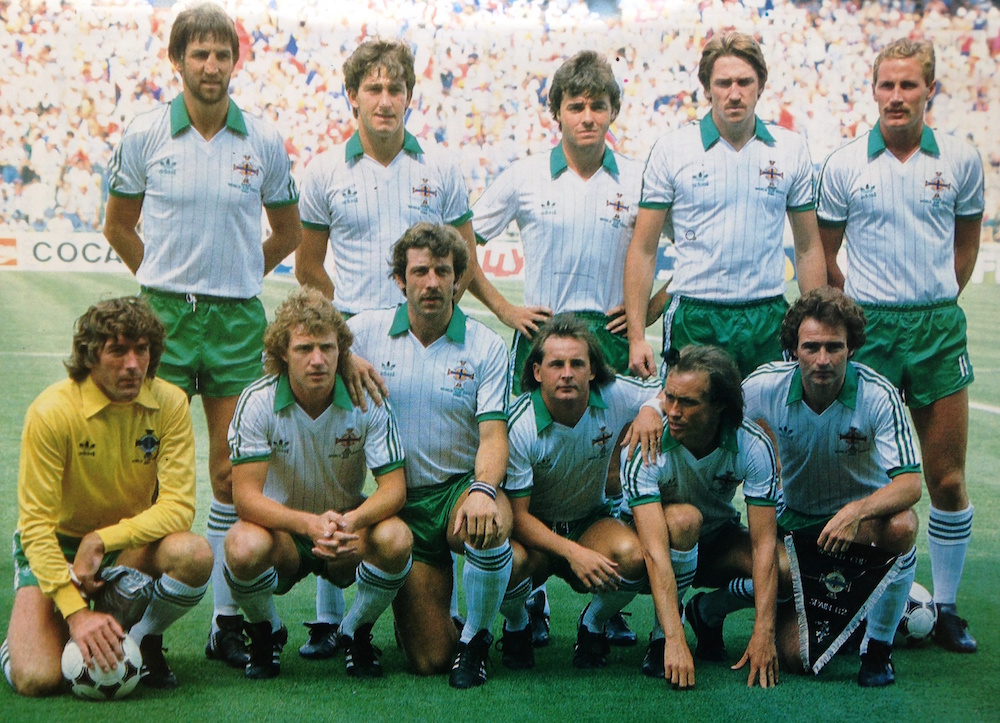 Ben Roberts takes a look at Northern Ireland’s road to the 1982 World Cup. You can also listen to a discussion on his new book, Gunshots & Goalposts: The Story of Northern Irish Football, below and you can buy the book itself by clicking here.

‘On July 1, 1916, a glorious chapter was written in the history of Northern Ireland at the battle of the Somme,’ a Belfast Telegraph editorial thunderously intoned, ‘Perhaps here in Madrid sixty-six years later the sons of Ulster will bring even further honour to the Province.’

The Northern Irish team had spent the build up to the 1982 World Cup training at the University of Sussex, unusually hot temperatures on England’s south coast that Summer ideal preparation for their upcoming Spanish sojourn.

While in Brighton, the travelling party stayed at the Metropole hotel, beside the Brighton Grand, where some two years later the IRA would detonate 20lb of gelignite resulting in the death of five Conservative officials at the party’s summer conference.

Their own Mrs Thatcher had a hand in the English, Scottish and Northern Irish presence on the Iberian peninsula in the Summer of ’82. Long forgotten by many today is the strenuous campaign urging that they should play no part in a competition where there was the possibility that they could face Argentina. The United Kingdom, of course, was at war over the Falklands with the South American nation.

One man would not be catching the flight, though there had been a ‘nearly’ moment for George Best in the months before the tournament, with talk of him going to Spain as a ‘supersub’. He was thirty-six and turning out for San Jose Earthquakes, sanguine about his omission, ‘I had half a chance to go, I suppose.

Billy Bingham was the manager, and the Irish media, and general public, put him under a bit of pressure to take me with them – sentimental stuff, really. I was getting towards the end. I was still reasonably fit but I was playing in a bad side in America, and it was just about time to come home.’

Among the squad Bingham had chosen, the mood in the camp was one of cautious optimism, reflected in Martin O’Neill’s observation that ‘I honestly feel we have the spirit to do something special in Spain.’ Billy Bingham’s preparations for the tournament – including making the players guzzle ten pints of water a day – involved using the Estadi Ciutat de València (home of Levante) as their base, although Valencia’s second club were practically bankrupt and required the IFA to pay some of their bills to keep the lights on, and in Bingham’s words, ‘get the ankle-high grass cut.’

Arrangements behind the scenes were well underway too. The IFA had freighted crates of Guinness over to the team hotel in Valencia, which one player would wryly observe was ‘no doubt more with the blazers in mind than the tracksuits.’ Bingham and his wife owned a chemist, providing the suntan cream for the side’s training camp in Sussex and their Spanish escapade.

The manager had also done a deal procuring identical sunglasses for the entire squad, later noting, ‘We’d had a few days sunshine. We’d trained very hard, we were fit and ready and off we went.’

Ready they may have been, but as Sammy McIlroy remembered: ‘No one gave us a chance.’

‘I think it was Jimmy Greaves who did a piece saying, “Well done to the Irish and my old mate Pat Jennings and Gerry. Good luck to them for qualifying. They ain’t going to be there long. Just bring a toothbrush and a spare shirt and you’ll be okay.” That type of thing. And you think, “Well, I know where he’s coming from but that hurt,” and it made us dig and get a bit more resolve. “We’re going to show youse,” I know personally I trained at home two or three nights a week. I used to go out running after training and you want to see the training I did at Watford. But I wanted this to be something special. I wanted to remember it. I didn’t think we’d qualify for another one so I thought, “I’m making the most of this one,” I didn’t know we’d qualify for the one after that.’

Simply titled ‘Yer Man’, the official song ahead of the tournament featured the players alongside Ireland’s 1970 Eurovision winner Dana, belting out inspired couplets such as ‘Viva Northern Ireland/We’re off to Spain’.

They had reached this point by virtue of finishing second in a group containing Portugal, Sweden, Israel and Scotland, who topped the table.

It was against the Israelis on 14 November 1981 that passage to the finals had been secured with a 1-0 victory at Windsor Park. Though his emergence was overshadowed by political realities – it was the height of the republican hunger strikes at Long Kesh – there had been a new player on show that night: wee Norman Whiteside.

He had not even made his United debut; that would come against Brighton on 24 April the following year, still not seventeen years-old. A substitute that day, he had come on for the last twelve minutes. His wages at Old Trafford were £16 a week, the team win bonus for victory in that game £800. It had been a meteoric rise. His place in the Northern Irish starting eleven, according to Bingham, was cemented by a twenty yard goal he had scored at training in Sussex. So it was that he would become the youngest player to take the field at a World Cup finals, aged just seventeen years and forty-one days old, in Northern Ireland’s opening fixture against Yugoslavia…