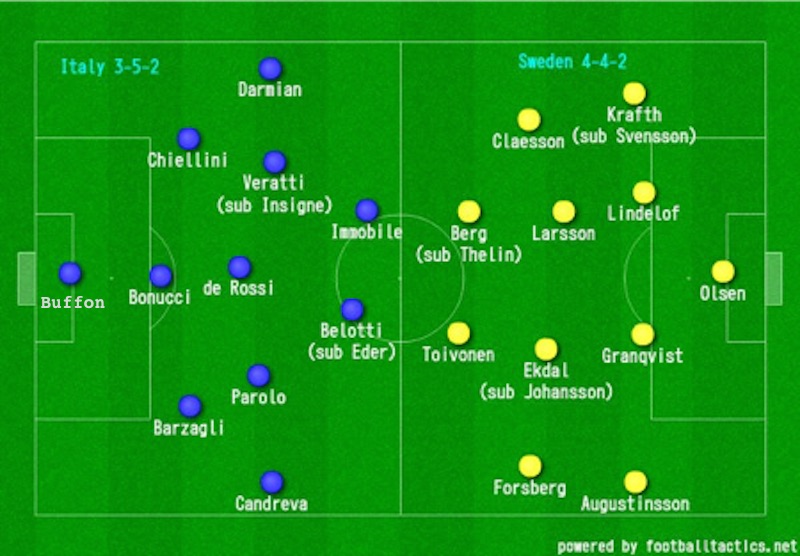 A hard-working Sweden draw first blood against a below par Italy in first leg of the World Cup playoff at Stockholm.

A deflected finish from Johansson in the 61st minute was the difference maker in a game full of physical battles.

Italy failed to respond and now have it all to do in Milan this coming Monday. For the Swedes, it’s all about defending well away from home and they might well knock one of the big boys out.

The game began with Sweden playing the ball long towards their physical forwards Toivonen and Berg.

With Forsberg and Claesson narrowing in from wide, it gave Italy a problem dealing with second balls. There were 2-3 chances in the first half hour when scraps invitingly fell to a Swedish player, but their finishing wasn’t good enough.

Italy, on the other hand did soak a bit of early pressure and settled into the game without threatening much, barring one massive chance from Belotti.

Their build-up from the back was well pressed by Sweden giving no time on the ball, but the Azzurri did well most of the time to get out of that trouble.

Wide centre-backs Barzagli and Chiellini switched plays to other side wing-backs knowing the fact that Sweden become narrow while defending and spaces are there in those wide areas.

This caused plenty of problems for the home side and the visitors looked good to make more use of it. Verratti and Parolo also tried to position themselves in wide areas when the centre-backs had possession.

It forced Sweden to be more stretched in their defensive shape. Despite all those things, the Italian forwards didn’t have much to feed on.

Sweden kept on playing with their long-balls as an option and Toivonen’s hold up play causing Bonucci & Co plenty of problems. A few cheap free-kicks were given away with second balls not defended properly by the away side.

The first half never had plenty of chances but the physical battle going on was on top and referee did a good job to take control as soon as possible.

The second half began with Italy doing the early exchanges and creating chances.

The diagonal balls towards opposite wing-backs was always on and crossing from those areas were superb. The only thing missing was the finishing touch.

Sweden found it difficult and kept getting themselves deeper with every passing minute. Whenever they try to clear, the Italians did well to press that and force a rushed pass from the back.

Just after a very good spell of 15-minutes from the away side, Sweden got themselves ahead against the run of play. A simple long throw from the right side was not cleared and once again a Swedish player pounced on the second ball at the edge of the box. Johansson reacting first volleyed the shot towards goal which took two deflections before beating a helpless Buffon.

The goal came completely against the tilt of momentum but not being alert to second balls eventually cost the Italians.

After that goal, it was natural that Italy would come out and play more front foot football. As it turned out, Sweden allowed them to have possession until the middle third and then pressed in the lower blocks. This led to some frustrated Azzurri passing and strikers getting totally irritated by the lack of service. Ventura replaced Belotti with Eder but it didn’t make much difference.

The home side went deeper as the game ventured towards its end. They defended resolutely against the balls that were put in from wide areas. Italy never really threatened apart from one shot by Darmian which rattled the crossbar. Crosses and long-balls got cleared easily indicating that Ventura’s men need to do more to get through this defence in Milan.

Throughout the game, Italy lacked that cutting edge from midfield. Playing Verratti/Insigne and Parolo in wide midfield meant they are getting space in wide areas but are not able to influence the game centrally where it matters.

The 3-5-2 system does that to wide midfielders. During their build-ups, de Rossi stationed himself in the defensive midfield role, and there were two strikers up front. There was no one to come short in that number 10 position and draw a defender out.

Everything was plain, playing wide and hoping one of the crosses finds a striker. Something different needs to be done on Monday to turn this result around.

Sweden, though, were resolute in the execution of their game plan. They defended the width of the penalty area and played long-balls towards their physical forwards.

They are a well marshalled 4-4-2 team who can be susceptible when balls are switched quickly, but are more than capable of defending crosses with good and strong centre-backs. The protection from Larsson and Ekdal/Johansson was commendable too. Wingers Forsberg and Claesson supported the strikers to get the knockdowns and cause trouble.

Overall, a deserved win for Sweden with the way they executed their game-plan. It was a physically feisty affair with the referee taking control expertly.

Italy need a spark from somewhere to get a goal or two in Milan. It is all about quick recovery and go again on Monday for both teams. It’s not over yet but the Azzurri are under a lot of pressure. Missing a World Cup for the first time since 1958 wouldn’t be a good thing.