Bosz Hangs On But Stöger Is Gone – Bundesliga Zeitung 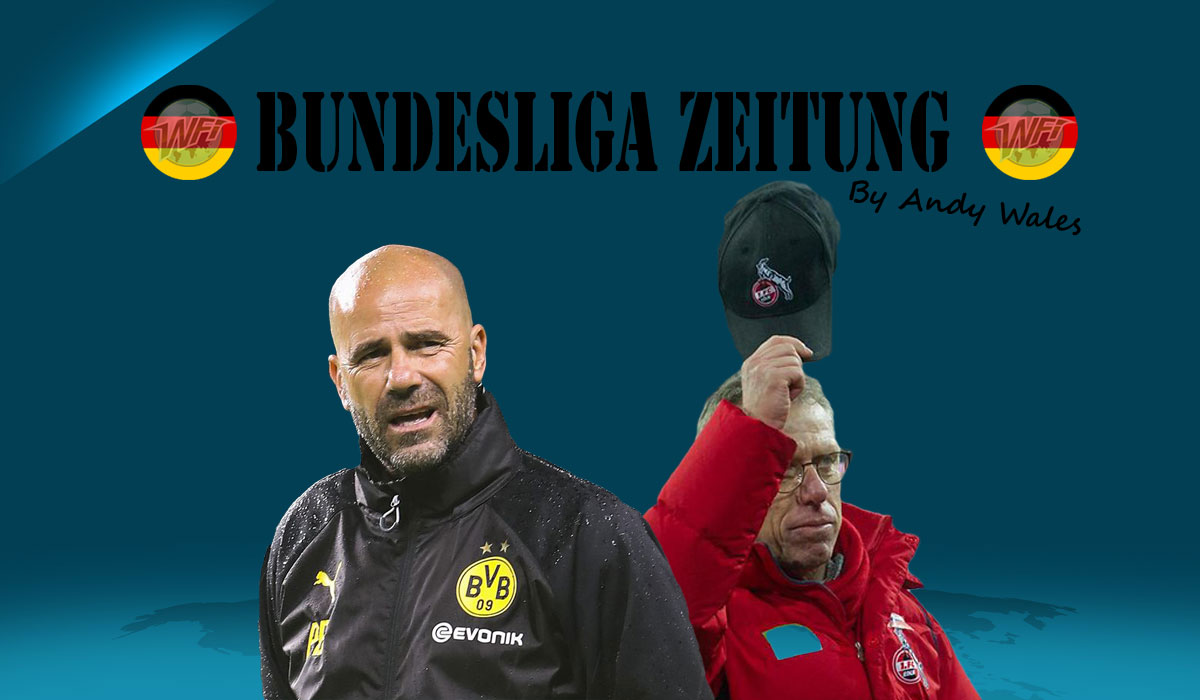 Sitting rock bottom of the Bundesliga, with no wins and just 3 points from 14 games, it seemed almost inevitable that coach Peter Stöger would depart FC Köln.

On the face of it, it’s an inevitability that would occur at any club, and the news began to filter out after the 2-2 draw with Schalke. At most clubs, this would normally come on the back of fans demanding such action, but at Köln, the calls for change have mostly been aimed at the board, writes Andy Wales.

This was all too clear once the announcement was officially made by the club. Responses from Köln fans were expletive ridden and aimed at the board, urging them to be the ones falling on their swords, all of which was wrapped in an overwhelming sense of gratitude toward Stöger.

As I have written about in earlier editions of this column, Köln have been through some testing times in recent years, both on and off the field. Stöger brought stability, got them promoted, re-established them in the Bundesliga, and even led them into Europe, for the first time in a quarter of a century. The Köln fans, understandably, hold him in high esteem for this and have continued to support him, despite what has been an extremely difficult start to the season.

Köln fans certainly made their mark when travelling to London for the Europa League tie against Arsenal. However, the club floundered in its attempt to compete on two fronts with an injury-hit squad and no replacement for the departed Anthony Modeste. So, Stöger and his assistant have departed and have been replaced by U19 coach Stefan Ruthenbeck until the winter break.

With Köln at home to Mainz this weekend, expect a vociferous reception at the RheinEnergieStadion, where fans are not shy of making their opinions heard.

As the Billy Goats begin a new chapter in their history, Borussia Dortmund continue with the one they began in the summer… for now, at least.

Bundesliga Table after Matchday 14. Dortmund drop to 6th place after their draw at Leverkusen. #bvb pic.twitter.com/ggnerqBmkS

This past weekend saw Dortmund extend their winless run with a draw away to Bayer Leverkusen, meaning they fell further adrift of Bayern at the top. In fact, as things stand, Dortmund will be looking less toward the points gap to Bayern and more toward Leipzig, Schalke, Mönchengladbach and Hoffenheim, who all sit above them in the table.

It’s not just how far Dortmund have fallen from grace since early season, it’s how quickly it has happened. In a squad packed with talented individuals, the collective strength that was once the hallmark of the team has gone. The lack any defensive organisation and a lack of cohesion in possession are also apparent, the latter of which is particularly concerning given the attacking talents available to Peter Bosz. Despite public support from the board, the Dutchman is running out of time to turn things around at the Signal Iduna Park.

The month-long winter break is fast approaching, and with another “englische Woche” next week, it could be make or break time for Bosz. This weekend they host struggling Werder Bremen, where anything other than a win could well signal the beginning of the end for the former Ajax coach. However, with the departure of head scout Sven Mislintat to Arsenal, continual rumours surrounding Pierre-Emerick Aubameyang’s future at the club, and even talk of sporting director Michael Zorc potientially moving on, it seems Bosz is not the only one whose role is in doubt at the Westfalenstadion.

Elsewhere, a resurgent Borussia Mönchengladbach face the team one place and one point above them, Schalke 04, in a potentially intriguing local derby. Schalke have understandably drawn praise for their good run of form that has seen them rise to third in the table, but Gladbach have somewhat gone under the radar.

Winning four of the last six games represents an impressive run for Die Fohlen, particularly with the victory over Bayern; despite a surprising loss to Wolfsburg this past weekend, they should still head into this clash on a high. It will certainly be interesting to see how the up-and-coming Domenico Tedesco deals with the challenge of the wily Dieter Hecking.

All in all, with such a busy run of fixtures before Christmas and the winter break, it could be a defining couple of weeks for teams at the top and bottom of the Bundesliga — Bayern and Leipzig could conceivably break away in the race for the title, whilst Bremen need a couple of positive results to prevent themselves being cut adrift with Köln in an intriguing scramble to avoid relegation.