Juventus Privilege & Other Rant-worthy Serie A Issues -The Calcio Consultant 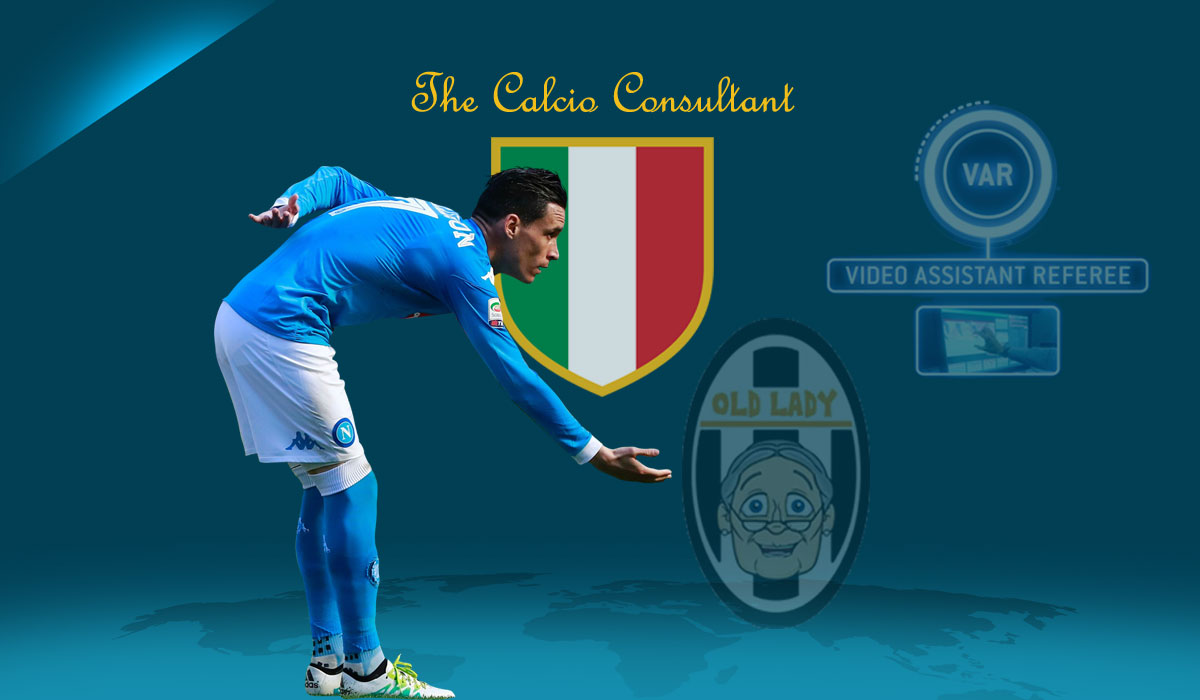 As a Milan supporter, I should be elated that the Rossoneri finally beat a top six side.

However, just about everything else that went on in Serie A this weekend was everything that is ugly about the league on the peninsula.

24 hours removed from the last kick of the ball between Roma and Sampdoria, and I’m still trying to digest everything that happened, writes Frank Crivello.

Oh, happy 40th birthday, Gigi Buffon. I’d love to write something about how you’re the Greatest Goalkeeper of All Time, and obviously the greatest goalkeeper I’ve ever seen.

However, your milestone birthday is taking a back seat. Besides, I don’t need to add to all the tribute pieces that are out there. I’ll just say thank you for that remarkable save on Zinedine Zidane’s header in the 2006 World Cup final that helped push the game to penalties.

Buffon’s birthday is in the shadows of this piece, much like that save was overshadowed by Zidane’s headbutt on Marco Materazzi (and I always say, if Zidane was ever going to get violent on anyone from the Azzurri, I’m glad it was Materazzi).

Alright, on with the rant. Here’s what’s got me suddenly grouchy about Serie A.

Chloe Beresford penned a piece on the progress of VAR in Italian Football for The Sportsman. I agree that progress is being made, and that (over all) VAR is serving its purpose.

Unfortunately – like any time something new is introduced to the game – the lack of consistency in its use can be glaring. Two incidents happened this weekend that, thanks or no thanks to VAR, could have a pretty big impact on how the standings shake out.

Let’s start with Crotone and Cagliari. Crotone had the winning goal through Federico Ceccherini heading in a free kick — a goal that looked perfectly legitimate. However, referee Paolo Tagliavento went to the replay (no one knows why) and the goal was overturned for offside.

Well, Ceccherini was clearly onside, so where was the infringement? The only thing I could think were the two Crotone players on the far post: they were in an offside position when the free kick was struck and they continued their runs, perhaps to a point where Tagliavento felt they intervened with the goalkeeper’s ability to make a save. Even then, ruling it offside was a reach.

It was an utterly ridiculous decision, and a reminder that even with VAR, the flaws of human judgement are still very much a factor. Crotone are mired in a relegation battle, and not having the two extra points that would have come with a win could loom large come the end of the season.

The other incident involved Milan in their win over Lazio. Patrick Cutrone scored what seemed to be a header from a free kick taken by Hakan Calhanoglu. Milan fans (myself included) were so deep in the euphoria that we couldn’t be bothered to look at the replays of the goal.

It was later in the evening when I saw the highlights that it became clear that Cutrone scored with his forearm. No one caught it, not even VAR. No review. Even Gennaro Gattuso, Milan manager, agreed after the match that they were lucky, as Cutrone’s goal should’ve been overturned.

Beresford points out that Simone Inzaghi’s Lazio have been denied 7 points prior to this thanks to the use (or misuse) of VAR, and we can make it at least eight now. For Lazio, that’s the difference between being the third team in a title race and having to fight off challengers for a Champions League position that they currently hold.

As it pertains to Milan, these two points from the failure to use VAR could prove crucial in their difficult task of finishing at least fourth and reaching the Champions League. I know, it’s unlikely, but don’t laugh — with the form of some of the teams in front of them, it’s possible.

At the time of writing, stories are coming out that Patrick Cutrone may be given a two-game ban for scoring with his arm. So let me get this straight: the officials and VAR officials missed the forearm goal, so the player has to suffer? This wasn’t like Maradona’s goal from 1986, even if Corriere Della Sport think it is. Of course, if this happened against Juventus, you could bet that VAR would have been used, the goal would have been overturned, and Cutrone would have seen red. Which leads me to…

Juventini, I am not doing this to pick a fight. I am calling out what desperately needs calling out, and it’s obvious: your team is privileged, so stop acting like it isn’t.

As if being allowed to continue playing while a Cagliari player was down with an apparent head injury so Juve could score a goal wasn’t enough. As if Cagliari not getting a penalty shortly thereafter for a handball by Federico Bernardeschi wasn’t enough. What happened at the Bentegodi against Chievo between the home side’s Fabrizio Cacciatore and referee Fabio Maresca was a new low.

Cacciatore was wrecked in the penalty area by Kwadwo Asamoah after attempting to head a cross on goal from a counter-attack. He’s down – no penalty – and the play continues. Physios check on Cacciatore to make sure he is okay, resulting in a stoppage. Cacciatore is okay and wants to continue.

Marseca orders Cacciatore back to the touchline so he can allow the player back in. Cacciatore is asking why, as the physios said he’s good to go, and Chievo only have 10 men as it is after Samuel Bastien’s first half red card.

Maresca gives Cacciatore a straight red, Chievo are down to 9, and the games turns into an attack v defense training exercise for Juventus, who go on to find two goals and win the game.

First of all, Maresca baited Cacciatore into this, and I’m not afraid to say it. I understand that referees need to feel important and want to exercise their ability to allow players on, but in this case, common sense should have been exercised over protocol.

As I said before, Chievo were down to 10, Cacciatore had the blessing of the physios, so just let him play.  This is Juventus though, and the result was still in the balance, so of course Maresca was going to bait Cacciatore into a situation that would only have one result. When this started, I knew the red card was coming.

Opponents of Juventus, here’s a bit of advice from The Calcio Consultant — KNOW WHO YOU ARE PLAYING, KNOW THE PERCEPTION OF THEM, AND KNOW THEIR REPUTATION!

I know that’s hard to do, but if Cacciatore was somehow sensitive to the situation, he would likely have stayed on the pitch. That, however, is asking a lot, especially when you have an unreasonable referee to work with. This incident leads managers to now have to prepare for a lot more than just playing the Bianconeri.

And Juventini, please stop with the Mourinho comparisons to this incident when he was at Inter. Of course you will agree with Maresca, because it was to your benefit. Which leads me to your hypocrisy when it came to…

“OMG THAT’S NOT A PENALTY THIS REF IS GARBAGE!” –just about all Juventini. I’m paraphrasing, of course.

It didn’t surprise me that the fact Adam Masina’s foul on Jose Callejon led to a penalty for Napoli would outrage fans of the Old Lady. If anything, I expected it, and I wasn’t let down. I’ve seen Juventus get awarded penalties for incidents far softer than this. Far, far softer.

So, was it a penalty?

I said this in a back-and-forth exchange of ideas over Twitter with a Juventus fan — it was a 50/50 decision, so credit to Callejon for selling it and getting Paolo Mazzoleni to blow the whistle.

This is a match awareness issue with Masina, as the worst Callejon would do from that position would be to cut the ball back for a teammate, so at that point, trusting your fellow defenders to have all the runs in the box marked out would be the wisest course of action.

Instead, Masina put his arm out and made contact with Callejon in the box, which is a dangerous thing to do. Could Mazzoleni have eaten his whistle there, as a scoring chance wasn’t coming directly from that position? Maybe. However, you don’t have to be in a scoring position in the penalty area to be awarded a penalty; just getting tripped in the corner of the area 18 yards from goal is enough.

So I’ll conclude it like this: if what Cacciatore did warranted a straight red, then yes, what happened to Callejon from Masina deserved to result in a penalty. Juventini, you shouldn’t get one without the other.

I’d much rather write a piece about Milan starting to turn a corner under Gattuso. I’d love to talk to you about Atalanta’s resurgence in the league. What Hellas Verona unexpectedly did at Fiorentina on Sunday (and what it could mean for their survival hopes) could be another topic. I want to also make mention of the goalkeeping clinics put on by Alisson and Viviano of Roma and Sampdoria, respectively.

Either way, VAR needs consistency, despite the good it has done for the league. The officials need to prove to us that Calciopoli is altogether dead, and start removing incidents like what we saw at the Bentegodi on Saturday.

At some point, perception becomes reality, and the perception that Juventus are a privileged team has long been a reality that needs calling out more often.

Until then, if other teams are getting suspect penalties, Juventini have no right to complain; they’ve gotten more than their share of controversial calls their way.