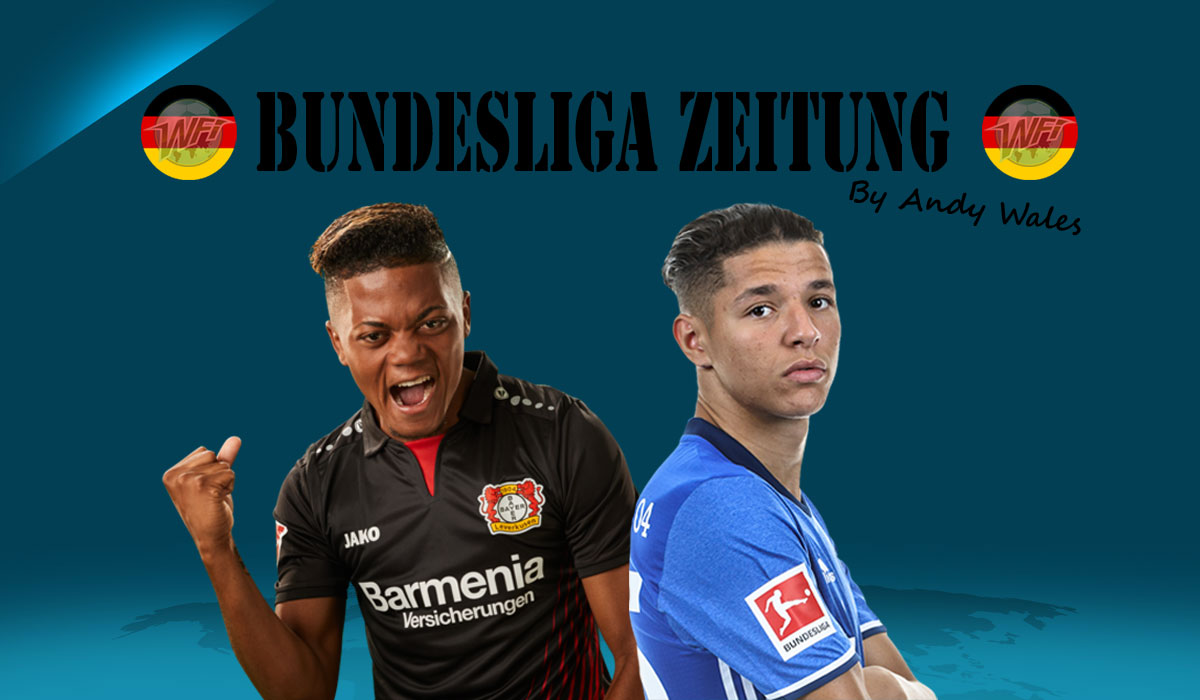 Whilst the Bundesliga title race is undeniably uncompetitive, what’s going on below Bayern in the league table is anything but. We started the weekend with a single point separating six teams — just one point between Bayer Leverkusen in second and Eintracht Frankfurt in seventh, writes Andy Wales.

Frankfurt were first up on Friday night against one of the teams above them, Borussia Mönchengladbach. The hosts dispatched Gladbach 2-0, thanks to goals from Kevin-Prince Boateng and an injury time Luka Jovic effort.

This temporarily took Frankfurt to the lofty heights of second, something nobody would have expected to see at this stage before the start of the season, even if it was for 24 hours.

Saturday saw the attention switch to the bigger hitters in this race for Champions League football. Dortmund played host to Freiburg, and the packed-out Signal Iduna Park expected a good win.

Despite rumours of a transfer to Arsenal gathering pace during the week, Pierre-Emerick Aubameyang returned to the starting line-up. Things started positively for Dortmund, who took the lead through Shinji Kagawa, and you’d be forgiven for thinking that more goals would follow. Instead, Freiburg snatched a goal back via Nils Petersen, and the visitors restricted their opponents far too easily.

Dortmund then proceeded to hand the visitors the lead; Nuri Sahin surrendered possession and Peterson was able to chip Roman Bürki from 35 yards. The goalkeeper has never looked convincing in a Dortmund shirt and will not want to watch replays of him somehow failing to tip the ball over the bar.

Peter Stöger may have cauterised the wound that brought a premature end to the Peter Bosz era, but Dortmund still look insipid and uninspiring in possession, as well as vulnerable defensively. An injury time equaliser spared some of their blushes, but Dortmund are a club threatening to break apart, and Bürki incredibly criticising fans post-match won’t help things.

Since then, Dortmund’s sporting director Michael Zorc publicly revealed that the club were now prepared to let Aubameyang leave, but only if certain parameters are met, namely the reported €70m price tag.

The player may not have gotten the dream move to Real Madrid that he desired, but as a move to Arsenal becomes increasingly likely, he will get a big pay day, and the opportunity to make his mark in front of a wider audience.

He may have regularly lit up the Bundesliga and brought an abundance of pleasure to the 80,000 inside the Westfalen, but the ill-discipline in the lead-up to his departure will unfortunately leave a sour taste.

Meanwhile, over in Leipzig, struggling Hamburger SV were the visitors, as new coach Bernd Hollerbach took charge of his first match since being appointed to replace the sacked Markus Gisdol.

Hollerbach will be delighted that his side were able to come away with a gritty point, but as far as RBL are concerned, it’s more points dropped in a somewhat stuttering campaign that has yet to reach the heights of last year.

The fact that Hamburg’s Filip Kostic is now the club’s leading scorer with just three goals speaks volumes of their issues this season.

Leipzig coach Ralph Hasenhüttl will be looking for a vast improvement in the coming weeks, as his side have now won just one of their last seven games – a concerning run of form, given how tight the race behind Bayern is.

💬 @KevinKampl_KK: "We ought to have scored a second goal. @HSV_English defended well in the second half, so we have to live with a point." #RBLHSV pic.twitter.com/dFRTL52eXt

Down in Stuttgart, Schalke had no such problems, as they condemned their hosts to a sixth defeat in their last seven games. Early goals from Naldo and the impressive Amine Harit were enough to seal the points for Tedesco’s men, giving them their first away win since November.

The result would prove to be a costly one for Stuttgart coach Hannes Wolf, as overnight discussions ended with his dismissal on Sunday morning. Despite the bad run of results, it does seem a harsh decision on the 36-year-old who only took charge in September 2016 and led the club to promotion back to the top flight.

However, it was clear in the official announcement that the club had lost faith in the ability of Wolf to turn around their fortunes; their next appointment will be an intriguing one.

The final team to play in this six-team battle was Bayer Leverkusen, who have exceeded expectations so far. As well Dortmund and Leipzig’s inability to stamp their authority on the league, the emergence of Leon Bailey has been a significant factor in Die Werkself finding themselves in a strong position.

The young Jamaican has demonstrated his dazzling skills and blistering pace since coming into the team, and he is now becoming a regular goal-scorer; it was his blockbuster effort against Mainz that caught the eye, as Heiko Herrlich’s team recorded a 2-0 win that saw them leapfrog Schalke into second place in the table.

This weekend starts with the reinvigorated Köln playing host to Dortmund, which means an emotional return for former coach Peter Stöger in what will be a must-win game for both sides. Schalke and Leverkusen will be expected to pick up wins as they play Werder Bremen and Freiburg respectively.

For Frankfurt, it’s a tricky away tie at Augsburg, whilst the other two sides in the mix, Mönchengladbach and Leipzig, play each other at Borussia-Park in the Saturday evening match. It all adds up to another fascinating weekend of action in the Bundesliga.