From Prolific to Horrific – 6 Months of Real Madrid 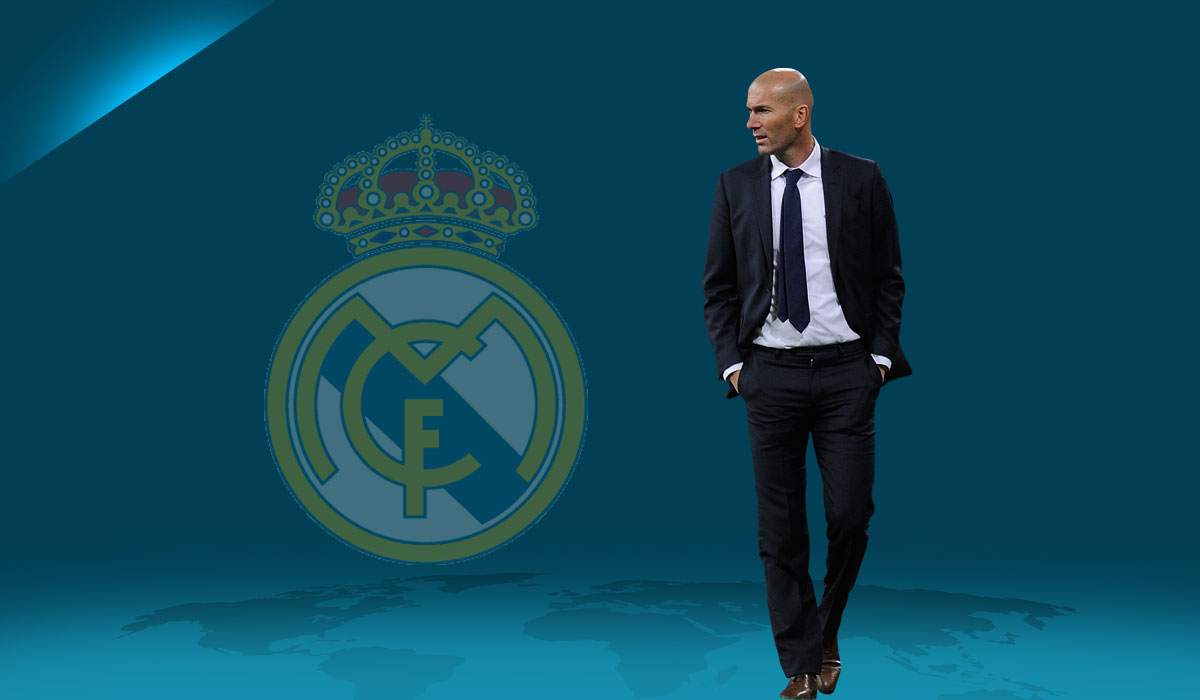 Once regarded as arguably the finest side to put on the famous white shirt of Real Madrid in the modern era – a steamroller of a side – Zinedine Zidane’s men are suffering, and the problem is being exacerbated with each passing day.

The Fondo Sur keeps screaming and singing to the top of their voices, creating an unprecedented atmosphere behind Los Blancos’ goal, but this side needs a little more than songs and slogans, writes Mudassir Mustafa.

For a club of Real Madrid’s stature, with a history as gloried as theirs, it’s hard to fathom the defensive and attacking woes they are having, let alone having to write them off this early in the league, which was widely expected to be a two-horse race between themselves and a restructuring Barcelona.

Zidane – regarded as one of the finest players ever to grace the pitch – has been divisive as to how good he is as a tactician, but he has obvious man-managing abilities. Two years ago, when club president Florentino Perez appointed him the manager after the sacking of Rafael Benitez, a lot of eyebrows were raised. Zidane managed the Real Madrid B side Castilla and reached the playoffs where they fell just short of promotion to the Segunda Division.

Appointing him the manager of the first team was a decision greeted with scepticism by many. After all, the narrative “great players don’t make great coaches” was established decades ago.

As a player, he had a nous, a kind of sixth sense to see the game at a blazing fast speed, which helped him in destroy the opposition and command the pitch like a general on the battlefield. However, Zidane the coach is not a true reflection of Zidane the player. His tactics are often regarded as chaotic and frenetic, but his man-managing abilities have helped him winning eight trophies in just 2 years, surpassing the haul of Pep Guardiola and Luis Enrique.

In August 2017, Real Madrid secured Super Copa de Espana, beating Barcelona comprehensively with a hefty aggregate score of 5-1. Gerard Pique’s post-match comments of “It is the first time I feel inferior to Madrid” made headlines across Europe. Real Madrid won more silverware and ended the calendar year with five trophies for the first time in their illustrious history, but all is far from well.

After matchday 17, Real Madrid trail Barcelona by 16 points (albeit with a match in hand), and they in fourth position behind city rivals Atletico Madrid and the impressive Valencia. Thanks to the inconsistency of chasing pack Sevilla and Villarreal, qualifying for the Champions League probably won’t be an issue, unless things somehow get worse.

Real hosted Iago Aspas’ Celta Vigo this past weekend in their first home game of the new year, but unfortunately for ZZ’s men, the result was as disappointing as ever. Celta left the Estadio Santiago Bernabeu with a 2-2 draw in a nail-biting fixture for both sides. The only positive to take from the match for the Merengues was Gareth Bale’s brace, which is hopefully a sign of a return to full fitness.

Fast forward to Wednesday, and Madrid hosted Numancia – a Segunda División team – for the second leg of the Copa Del Rey’s Round of 16. Having an aggregate advantage of 3-0, it was theoretically a comfortable night for Los Blancos. However, the performance and results ensured it was the opposite.

Yes, Madrid went through to quarter-finals 5-2 on aggregate, but Numancia earned a 2-2 on the night. Madrid’s performances from the start of the season show a downward trend from prolific to horrific. Zidane has looked lost so far in this bleak winter, and he gave a cold stare to his players who have let him down once again.

The manager is exposed, the tactics are not working, and his stubbornness is not making it easy. What went wrong in a span of few months?

Madrid’s back-to-back Champions League triumphs and their overdue La Liga title in Zidane’s first full season had everything to do with the squad depth and rotation. This year, the depth is there, but not the same quality. The most impactful name to have left is Alvaro Morata. The Spaniard, who scored over 20 goals in his last campaign with Madrid, has found good form in England with Chelsea.

James Rodriguez, the star of World Cup 2014, has left the Spanish capital on loan to Bayern Munich. He was decisive in last year’s campaign, but a lack of playing time saw him fall out with the manager, eventually paving his way to Germany.

Mariano, the youngster promoted from Castilla, had his share of moments last year, especially his goal against Deportivo La Coruna to secure the 3 points. Other notable mentions are Pepe and Danilo.

Last year’s talking point was the diamond midfield formed by Casemiro, Luka Modric, Toni Kroos and Isco. Isco was playing in a free role ahead of Modric and Kroos, behind Ronaldo and Benzema/Bale. This formation brought the best out of Isco; his ability and intuition earned him numerous standing ovations from the fans. But this year, the story is different.

The tactics have been tweaked, but due to his free role, there is always a defensive hole left by him that often gets exposed by opposition counter-attacks. No one knows where Isco will be — he drifts all over the pitch, which can cause confusion as to which gaps his teammates should plug, when and where. Madrid have thrived when Lucas Vazquez and Marco Asensio started on the flanks either side of a double pivot in 4-4-2, with Ronaldo and Benzema up front.

In short, the 4-4-2 diamond is not working any more, and Zidane needs to find the right system rather sooner than later.

A lack of goals:

At this stage last season, Real Madrid had 47 goals for and only 18 against, compared to this season’s 32 and 16 respectively. None of the team have been able to register more than 4 goals in the league at this stage of the season, which is abysmally low according to their own standards. Ronaldo is struggling, dropping deeper and deeper to get the ball, and the Portuguese is having the worst run of his career in the white shirt.

Benzema’s struggles are obvious. The striker is blamed the most, but Zidane is convinced that he is the right man for the job up front because of his selfless endeavour and relationship with Ronaldo, but the evidence from either part of that strike partnership is not good enough to make a case for their continued inclusion as a pair.

Real Madrid’s crises are incomplete if defensive errors are not mentioned. Historically, ‘Real Madrid’ is not a synonym for ‘defensive masterclass’. Sergio Ramos, captain of both club and country, is a card-earning machine, which has proven costly for the side.

Raphael Varane is calm, sometimes too much so. He is reluctant to challenge the attacker and allows the opposition to come at him. This might be okay against weaker opposition, but against world-class strikers, this doesn’t work. His ability to dominate in the air and run like Usain Bolt comes in handy, but relying on speed alone is unwise, and his distribution has been unreliable at best.

Real miss Pepe badly, to say the least. Jesus Vallejo is young and full of promise, but he lacks the requisite experience to step in and do the job required at a time of crisis.

Injuries to Dani Carvajal and Marcelo have caused the wrong kind of havoc on the flanks, and when they do play, while the former is good defensively, Marcelo hasn’t offered anything at either end of the pitch.

A team with so many creative players being routinely unable to break down defences is an unusual sight. Madrid’s recent attacking penetration has come from either moments of individual brilliance or from countless crosses eventually paying dividends. Zidane’s tactics rely heavily on the fullbacks, but Carvajal and Marcelo are both a shadow of themselves this season.

Isco’s presence offers creativity and control, but as mentioned before, the problems he brings to the defensive shape of the team are overriding what he does in possession. Kroos and Modric are also performing inconsistently, and the duo’s link-up play is significantly weaker than before.

Well, it turns out that it was Madrid who had a dreadful summer, not Barcelona. James, Morata, Pepe, and even Mariano heavily contributed to Madrid’s success, and they have not been adequately replaced. Dani Ceballos, Vallejo, Marcos Llorente and Theo Hernandez were brought in, with Borja Mayoral called back from his loan in Germany after struggling to get minutes at Wolfsburg, but this bench lacks the experience and quality of last season.

Because of this, the first team players have arguably gotten too complacent, knowing their places are safe and that they are relative untouchables without having to perform to the level that demands such a label.

Benzema’s case tops the list; Ronaldo’s isn’t far away either. Ceballos, who offers immense creativity in the midfield and has the ability to unlock the finest of the defences, is constantly ignored, and when a game-changing choice off the bench should be Asensio or Ceballos, Zidane’s mentality is to bring the steady Lucas Vazquez on, who is more of a workhorse than a match-winner.

In hindsight, Zidane does know he is living on the edge. The season is still salvageable; there are other trophies to contend. The crises are not perpetual, and the squad has the ability to turn this around, if they can somehow find some form. But the key is to do it together. The team is lacking ambition and the substitutes are lacking confidence.

Zidane has to change things (including his own instincts) to turn this around, otherwise his fate will not be much different from Carlo Ancelotti’s.

Bale is back from injury, and if he can somehow be kept out of the physios’ room, Madridistas couldn’t ask for a better ‘January signing’, but the rest of the senior players need to play with intensity and ambition as well.

There are numerous occasions when Marcelo and Kroos, to name a few, have been criticized for merely jogging back when the opposition’s counter is in full swing. This type of attitude will only exacerbate the situation.

Zidane’s dubious decision to not give more minutes to the likes of Ceballos, Kovacic and Asensio ahead of the underperforming names ahead of them also needs to be addressed. Ramos should take the responsibility and instead of drawing card after card after card – he is the captain, not a blackjack player.

While the race for La Liga is all-but-mathematically over, the Champions League and Copa Del Rey campaigns are still alive. And if any team can turn a season around, it is Real Madrid. They have done it in the past, and they can do it again.