Batman The Hero As Reus Extends at BVB – Bundesliga Zeitung 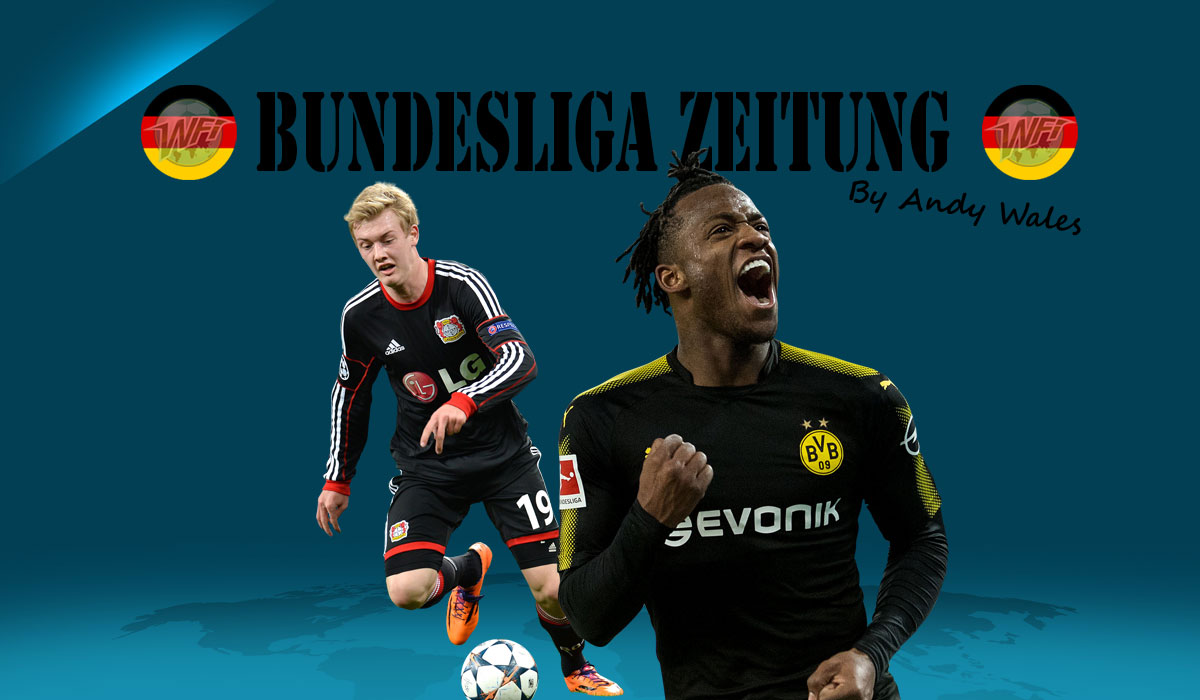 Back in the summer, the loss of principle goal scorer Javier Hernandez looked a sizeable blow to Bayer Leverkusen. Despite having an array of talented players amongst their ranks, the unpredictable and inconsistent Leverkusen had relied heavily upon the goals of the Mexican striker.

In addition to Hernandez, there was also the loss of the creative enigma Hakan Calhanoglu, it made me question what type of campaign lie ahead for Die Werkself.

It seemed there may be too much pressure and reliance upon the young shoulders of Julian Brandt. However, the emergence and impact of Leon Bailey and Kai Havertz was something nobody could have envisaged. The pair have exceeded anyone’s expectations this term and have understandably attracted the interest of admirers around the continent.

Leverkusen do still have some of their defensive brittleness, but they have found an increased level of consistency this term. It should be said that they have been aided by Borussia Dortmund and RB Leipzig being anything but consistent.

Saturday evening saw Leverkusen host Borussia Mönchengladbach in a local battle with more than pride at stake. In the end, things didn’t threaten to get spikey until the second half and Gladbach rarely troubled Bernd Leno.

Leverkusen led through a Lucas Alario goal late in the first half and although an equaliser didn’t look on the cards, it wasn’t until injury time that Brandt put Gladbach out of their misery, finishing off a nice move.

The win meant Leverkusen ended the weekend in fourth position and Champions League qualification, that looked a pipe dream in the summer, now looks a realistic possibility. For Gladbach, yet another defeat leaves them looking nervously over their shoulder at the teams in the bottom half getting closer and closer.

Last week, I wrote about the unlikely contenders Eintracht Frankfurt and how they are the unfashionable gate crashers to the European party. On Sunday they had the task of crashing a Marco Reus inspired celebration at the Westfalenstadion.

Reus is a world class talent, tragically blighted by injuries. Without them, it’s likely the Spanish giants would have come calling and many of the Premier League elite are known admirers. It’s a shame to speculate in that manner, but it is also realistic, given the level of talent Reus possesses and has demonstrated.

Indeed, Reus would have been an influential member of the Germany team that won the 2014 FIFA World Cup, were it not for the cruel fate of injuries.

The flip side is that Reus is a boyhood Dortmund fan who has always seemed happy to remain loyal to the club he loves. With his contract running down, tit-bits of speculation had begun to surface, so it was great to see the club announce he had signed a new deal, extending his stay to 2023.

Indeed, Reus was quoted on the announcement of his new contract as saying “this renewal is a thank you to our fantastic fans, who have always stood by me. The club has supported me in tough times, so it was important for me to thank them.”

So, if the mood going into the game was a good one, it will have been one of exhilarating excitement coming out of it.

The majority of the game was something of a non-event. Dortmund led through an early Marco Russ (not Marco Reus) own goal and largely controlled the contest, with Christian Pulisic showcasing his talent. Perhaps that sense of control had morphed into complacency and the home team began to take their foot off the gas.

If Dortmund thought their visitors were done, then it was misguided because indomitable spirit is what has kept Frankfurt in this European race. With fifteen minutes remaining, a free-kick floating into the box found the head of Luka Jovic to bring the visitors level.

The game had been petering out, but that equaliser reignited it and was the beginning of the most dramatic of finishes.

Within two minutes, substitute Michy Batshuayi ended his mini goal drought, linking up with the impressive Pulisic to fire Dortmund back into the lead. Despite the action going back and forth, it appeared that goal would be enough to seal the points, but Frankfurt again showed exactly why they have been upsetting the odds this season. It was into added time when Danny Blum was on hand to finish a low cross from Danny da Costa.

Frankfurt were jubilant, Dortmund once more frustrated at their defensive fragility. However, the drama was not yet over. With virtually the last kick of the game, it Batshuayi again on hand to further endear himself to the Black and Yellow faithful as he blasted home for a win that felt like a big win in the circumstances.

Coming out on top of dramatic finishes can have a galvanising effect and, as well this win keeping Dortmund right on the tail of rivals Schalke, perhaps it will energise them as this season comes to a climax.

One match of particular note next weekend is champions elect Bayern Munich travelling to Leipzig, where defeat for the hosts could leave clear daylight between themselves and the Champions League places.

So, drama and comic book heroes on match week 26 and there’s still plenty to play for in this intriguing Bundesliga season.