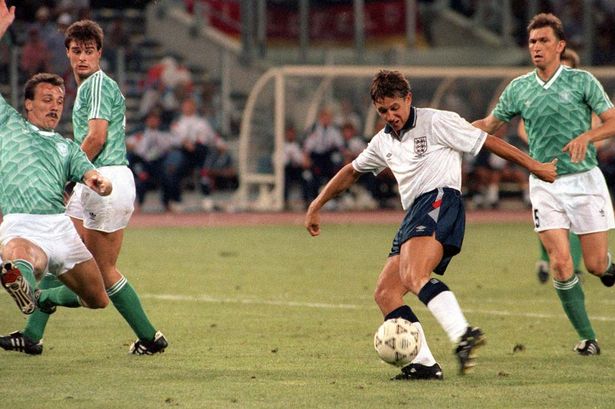 After a disappointing performance against Republic of Ireland in their opening game of the 1990 World Cup, England recovered well – inspired by the genius of a young Paul Gascoigne.

A decent display in a 0-0 draw against European Champions the Netherlands set the tone for England’s best ever tournament performance on foreign soil.

1-0 wins over Egypt (in the last group game) and Belgium (in the last 16) meant they came face to face with one of the biggest stories of Italia 90 – Cameroon.

Gary Lineker scored his second and third goals of this World Cup, both from the penalty spot, to take England through 3-2 AET, and set up a meeting with West Germany.

Die Mannschaft had looked very convincing on their way to the last four. Impressive performances against Yugoslavia and the Netherlands marked them out as favourites against England.

After an impressive opening half an hour from England, West Germany grew into the match and took the lead on the hour mark.

A spirited response from England is rewarded when Parker’s searching cross-field ball to Lineker is controlled brilliantly by the England striker and sweetly struck into the corner of the net.

That was Lineker’s tenth World Cup goal overall as he had grabbed six in Mexico in 1986 – enough to win him the Golden Boot.

Extra-time saw Shilton pull off some good saves and both sides hitting the post. David Platt had a goal ruled offside by the finest of margins.

However, the one incident that made this game famous was Paul Gascoigne’s yellow card, his second of the tournament, which meant he would miss the final – the referee’s decision reduced one of the stars of the tournament to tears.

England, in their first ever penalty shoot-out, lost to a West Germany side more adept and well practiced in the art of penalties.

In the final, the Germans beat Argentina 1-0 in a bad tempered affair. England lost 2-1 to Italy in the playoff for third place.

After retiring four years later, Gary Lineker became a television presenter in his homeland and is the face of BBC Sport’s coverage of major tournaments and events.

He also co-presented the FIFA World Cup 2018 Draw in Moscow in December.