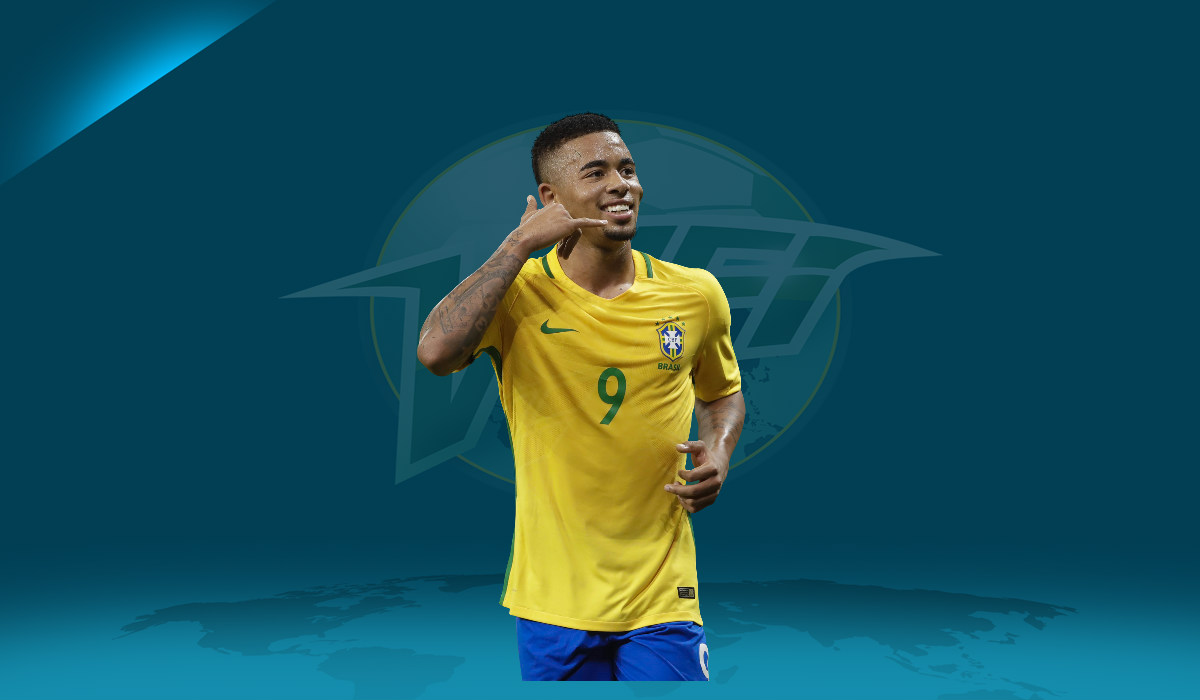 A popular story went around in advance of the World Cup to illustrate the meteoric rise of Gabriel Jesus.

During the 2014 World Cup, he helped the other kids from his neighbourhood, Jardim Peri, a favela in the north part of São Paulo, to paint the streets in Brazil colours.

Little did he know at the time that he would lead the Seleção into the next tournament wearing the number 9 shirt.

Shortly after Brazil’s 2-0 win over Mexico on Monday, a meme began to circulate with a picture of the 16 year old Jesus, paint brush in hand in Jardim Peri. It read:

“Gabriel Jesus did more for Brazil in 2014 painting the streets of Jardim Peri than he has done in this World Cup.”

Brazilians are creative meme makers and have a wry sense of gallows humour. After the 2014 World Cup, traffic cones all over the country were daubed with the name of Fred, after the striker’s less than imposing performances during the tournament.

Meanwhile, in England, those fed on a Premier League diet testily enquire as to why Liverpool’s Roberto Firmino is not starting in Jesus’ place.

After the group stages, I put this thread together on twitter, explaining why Tite prefers to play with Jesus, so I won’t repeat it here.

Lots of people asking why Firmino doesn’t start over Jesús for #Bra. It’s been tried quite a few times and it’s not worked because, up until now (and this doesn’t mean it’d never work) Firmino and Neymar don’t connect well at all. They have gotten in one another’s way.

The clamour for Firmino grew louder when he came on and scored Brazil’s second goal as an exhausted Mexico chased an equaliser on Monday afternoon.

In the build-up to the Mexico game, an article appeared in Globoesporte defending Jesus’ overall contribution for Brazil during this World Cup.

It spoke of how much ground he covered and revealed that his teammates refer to him as “O fenômeno” due to his work rate. Given that level of intimate detail in the article, it is likely it was ‘leaked’ from the Brazil camp.

It was probably leaked to lift the player’s confidence, with criticism starting to increase as his relative goal drought continues. But it was also released, most likely, to correct public perception a little.

Tite is a coach that likes to go into tactical detail in his post-match briefings. On Monday afternoon, as the dust settled on the 2-0 victory over Mexico, another article appeared with quotes from Brazil coach Sylvinho, again praising Jesus’ overall contribution.

Having run more than 10 kilometres against Serbia, Jesus once again topped the running stats for the Seleção against Mexico with 9.4km of distance run. Tite talked up Jesus’ adaptability in the second half in his post-match press conference.

El Tri were posing problems for Brazil on both flanks, with Carlos Vela exposing Fágner’s international inexperience on one side. On the other, Filipe Luís began to tire after a three month spell on the sidelines at the end of last season.

The Atleti man was on a booking against Mexico’s most dangerous player, Hirving Lozano. Tite switched to a 4-4-1-1 system and Jesus moved to the left wing.

This way, Brazil were able to cover the width of the pitch a little better, with Willian and Jesus helping their full-backs cope with the dual threat from the flanks. Coutinho moved into a number 10 position and Neymar into a more central role.

Jesus began life as a left sided forward at Palmeiras, which is part of the reason he has formed such a good understanding with Neymar.

He instinctively understands his movements on the ball from the left (both players grew up idolising Robinho). But on this occasion, Jesus, who has covered more ground than any of his teammates during this tournament, was asked to move to the left to form a defensive brief on a blistering hot summer’s afternoon.

This illustrates why Tite (and Pep Guardiola) value him so much, his incredible work rate and intelligent pressing from the front.

Number 9s are usually judged as goalscorers, especially number 9s that wear the canary yellow shirt of the Seleção. But Jesus’ principle job in this team is not goalscoring — even though he has a healthy record in that respect.

His job is to push defences back with his runs in behind and into the channels and to attract defenders away from the likes of Neymar, Coutinho and Willian.

Those three players have not struggled for space or opportunity during this tournament and that is thanks largely to Jesus’ movement and industry.

While Firmino’s speciality is attracting defenders away from their defensive banks to leave gaps for goalscoring wide forwards, Jesus operates differently.

The Manchester City striker pushes defenders back towards their goalkeepers, which allows the attacking trio behind him time and space on the ball. Coutinho is encouraged to shoot from range and Jesus gives him space to do that.

Neymar is encouraged to take the ball and dribble his way into the area and Jesus acts almost like an NFL style blocker, creating a vacuum around Neymar, Willian, and Coutinho.

Gabriel Jesus praised by Brazil’s national team staff for his performance today, no Brazilian player covered a bigger distance than he did today, Globo Esporte believes he will start against Belgium: https://t.co/LBWHuJM9bv #WorldCup

Per Kay Murray on twitter, Neymar has had more shots (23), more shots on target (12) and created more chances (16) than any other player so far in the World Cup.

Tite will look at this information and believe that Gabriel Jesus is doing his job in freeing up Neymar. Neymar and Willian were able to combine for the opening goal against Mexico on the lip of the El Tri area, with Jesus occupying centre halves as Willian and Neymar exchanged passes.

Coutinho has earned rave reviews for his performances thus far, with a goal and two assists. A lot of this is due to the selfless work Jesus does for the team.

Much of this debate has been conducted through the megaphone of Premier League tribalism, but this isn’t necessarily about who the better player is.

Firmino’s Liverpool performances deserve every accolade, but Brazil are not Liverpool and selecting a balanced team is not a game of Top Trumps.

While it would be disingenuous to pretend that Jesus has been playing at the absolute ceiling of his ability, he is playing far better than he is being given credit for. The attacking trio behind him are having good tournaments (Douglas Costa also played an impressive 45 minutes against Costa Rica) and that’s not a coincidence.

Jesus himself is keen to point out that he has not been missing chances, telling Globo:

“If you watch the four games so far and show me a good chance I have missed, I will be sad. But I haven’t had a clear chance yet. But I am contributing.”

Number 9s are often judged on goals and that’s understandable. But in the case of Gabriel Jesus, a big part of his job is revealed in the goals scored, and the performances of his teammates.