From Stalingrad To Volgograd Via Communism: Rotor Keep The Dream Alive Despite Turbulent History 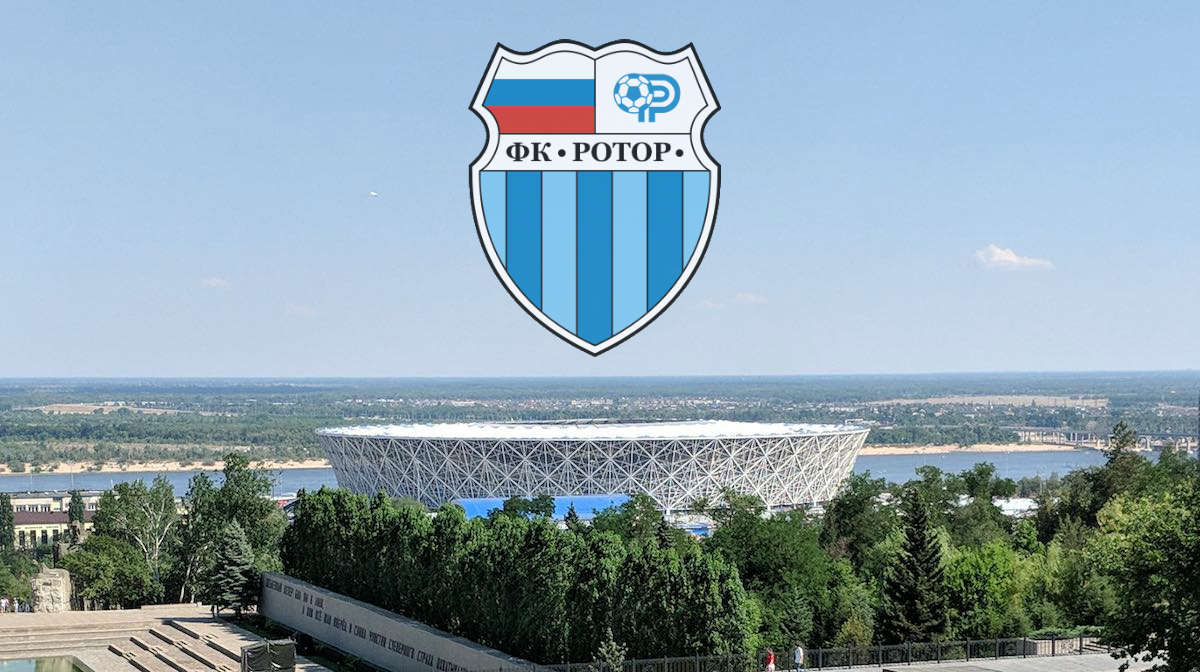 Timing has played a major role in the story of Rotor Volgograd.

On occasions it has been their best friend and circumstances have helped them produce giant killing performances which live long in the memory. At other times, however, it has reduced them to nothing.

Their history is a turbulent one of memorable highs and the lowest of lows, and it’s a wonder they exist at all today, but a new stadium on the banks of the River Volga could be just what they need to achieve something resembling stability.

The city, like the football club, has itself changed names a number of times throughout history. From its foundation in 1589, until 1925, the city was known as Tsaritsyn, before being renamed Stalingrad after the country’s then leader, and then renamed Volgograd in 1961 after the river on which it stands.

The removal of Stalin’s name was due to the process of de-Stalinization undertaken by his successors, beginning with Nikita Khrushchev.

Though the dilution of Stalin’s ‘cult of personality’ and the eradication of certain aspects of Stalinism were welcomed, the decision to rename one of the most important Soviet cities of World War II is still contested to this day.

Echoes of the Battle of Stalingrad are everywhere in the area, especially in the shape of the T-34/76 turrets which have been converted into memorials in the locations of important strongholds during the battle.

The Battle of Stalingrad museum offers a history lesson, while the remains of Pavlov’s House and Gerhardt Mill serve as reminders of the devastation caused by this brutal battle. 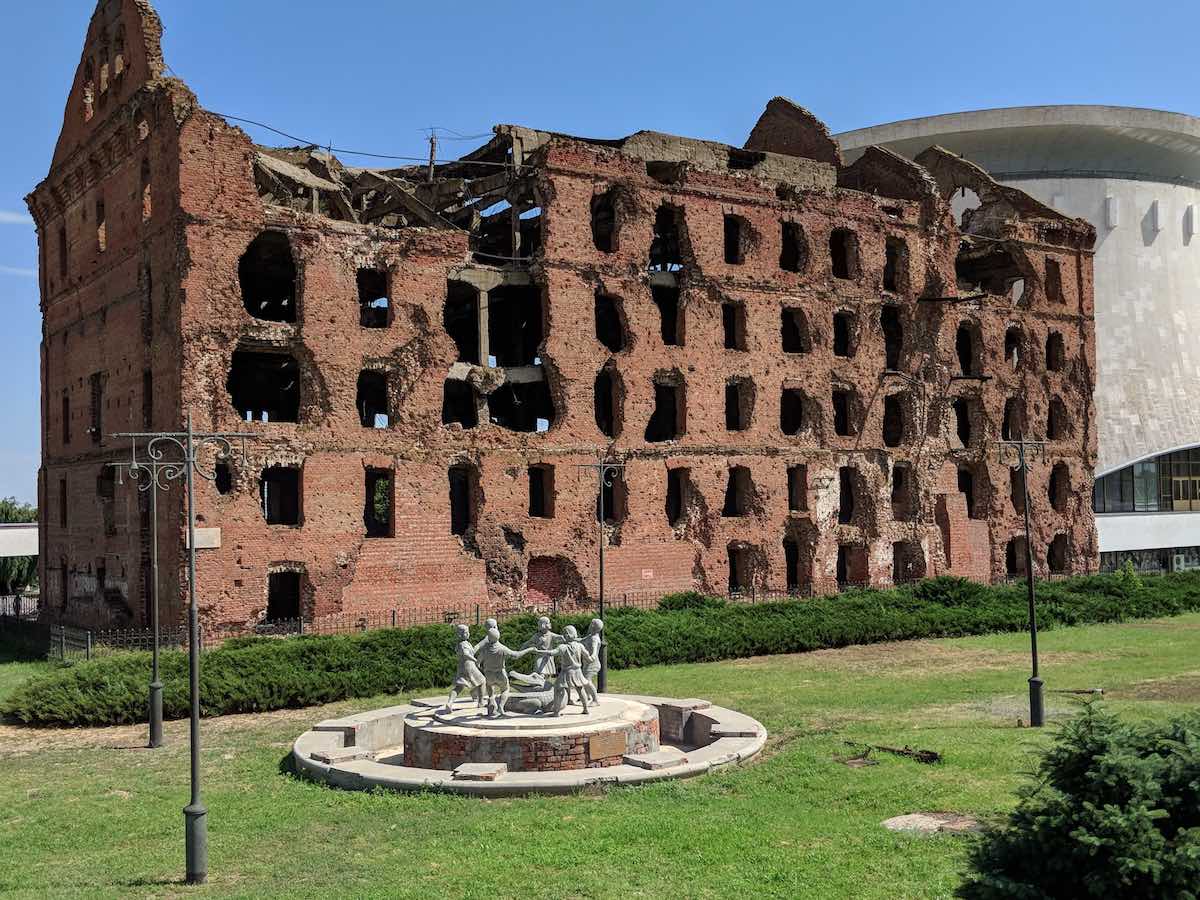 Stalingrad was one of the most important cities in The Soviet Union during the war, not least because it bore the name of their leader. The battle to retake it from the German Army became a symbol of the downfall of Nazism and the eventual victory of the Soviet Army and the Allies.

Today the city remains one of the biggest in southern Russia, along with Rostov-on-Don, and is an important historical centre.

The Mamayev Kurgan overlooks the new Volgograd Arena, with the huge, striking Motherland Calls statue standing atop the hill. It commemorates those who fought in the war, including infamous sniper Vasily Zaytsev, and is a permanent reminder of the importance of this Hero City.

This hill is now a tumulus, and it played a key part in the Battle of Stalingrad thanks to its views across the city.

The remains of two Red Army soldiers were found by the river at the foot of this hill during the construction of the new stadium, and moments like this show that the city will constantly be reminded of its past even as it looks to the future. 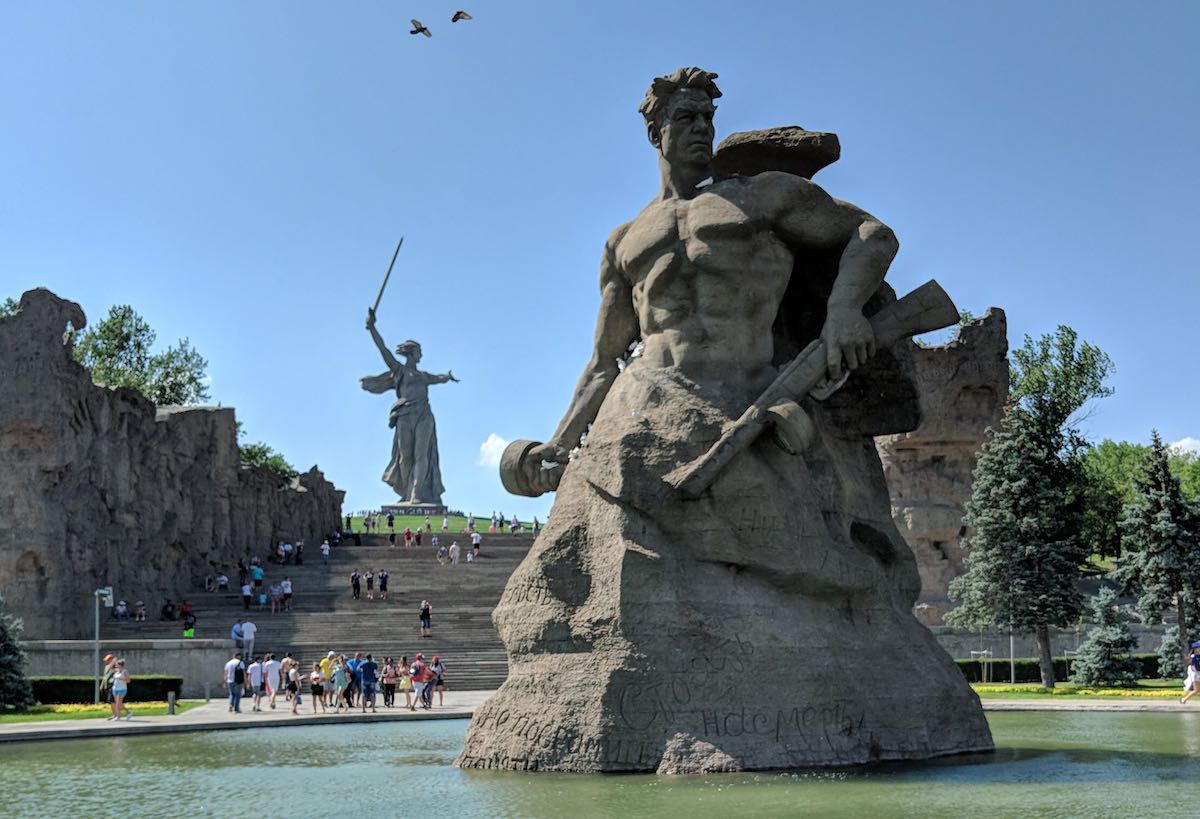 Following the success of the Russia World Cup it seems only fitting that Volgograd should have a football team which reflects its status. One which can eventually compete with the big cities in the north such as Moscow and Saint Petersburg, and capitalise on the football fever which took over the city during the group stages.

The FIFA Fan Fest, located on the 62nd Army Embankment — another reminder of this city’s history — was packed each day as supporters of all nations perched on the steps of the embankment to enjoy the games on the big screen. 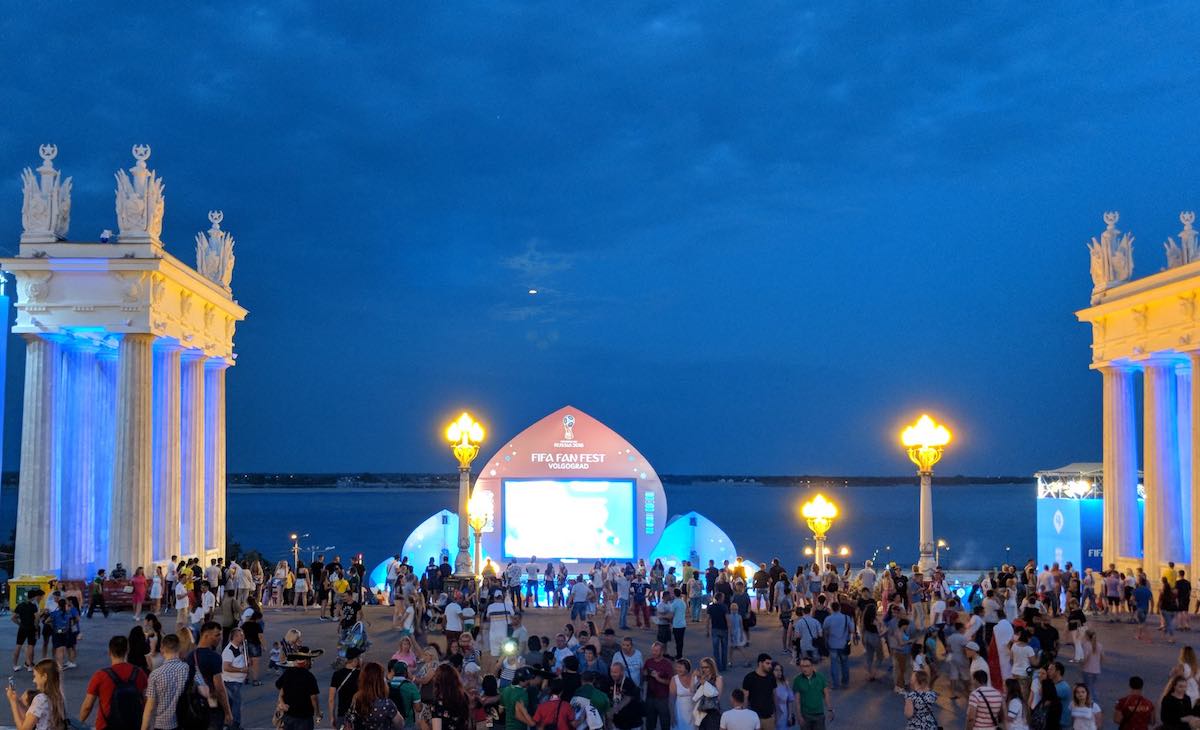 It provided the ideal outdoor theatre in which to watch the games, and even if Russia weren’t playing or if there were no games at the Volgograd Arena on that day, it was still full.

But while the idea of a shiny new stadium to house a sleeping giant sounds like the beginning of a romantic new era, the reality will be much more difficult. 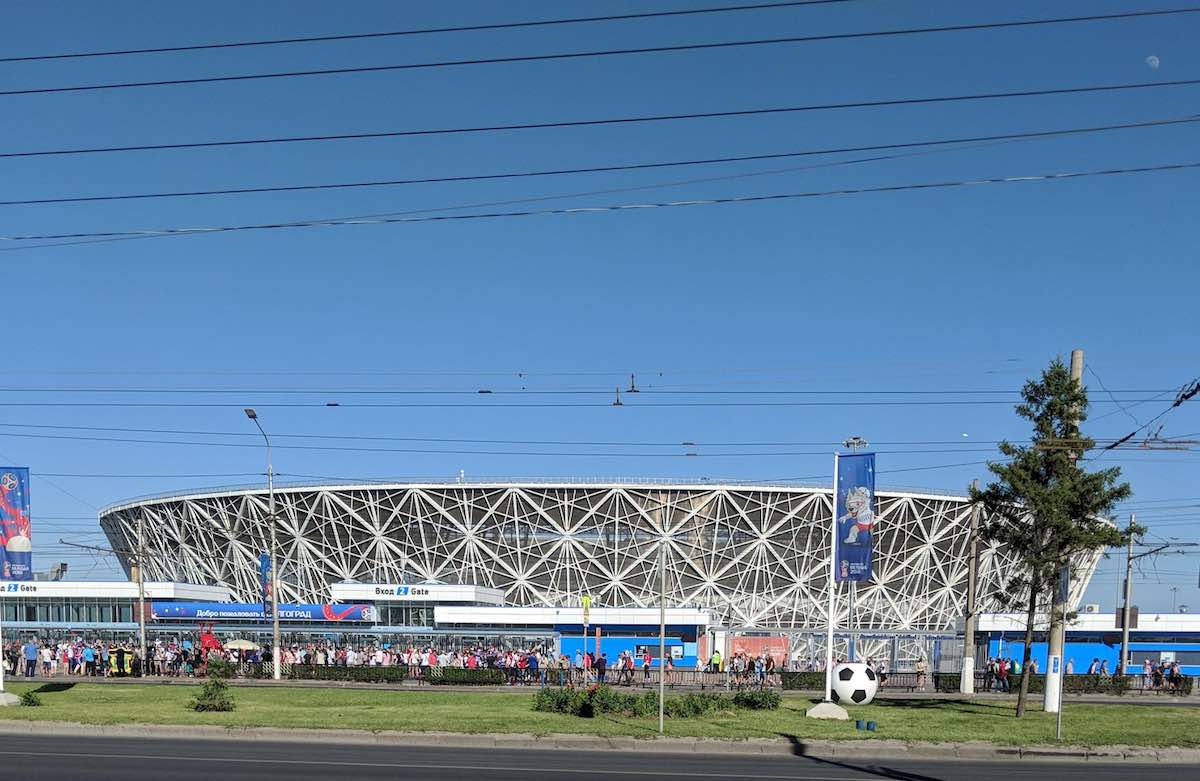 During the pre-World Cup season Rotor played in Russia’s second tier, having been promoted from the South zone of the 5-zone Professional Football League (PFL) third tier in 2016/17.

With a new stadium ready to go, relegation was unthinkable, but it almost happened.

Rotor finished 17th, which in normal circumstances would have seen them relegated and return to the PFL, but a number of events saved the National Football League’s (FNL) bottom four from the drop.

This second division is a truly Russia-wide league, and not limited to the western area of Russia as is often the case with the Premier League (although the new season will see Krasnoyarsk based side Yenisey, from central Russia, take a place in the top flight).

Geographically the second division ranges all the way from FC Baltika in the Russian exclave and World Cup host city of Kaliningrad, located between Poland and Lithuania; to Luch-Energiya in Vladivostok, by the border of China and North Korea.

The World Cup in Russia may have felt like the grandest of tournaments in terms of scale, but in reality it only touched the western flank of the country, sneaking slightly inland to Yekaterinburg.

The Russian second division, on the other hand, is the most global of domestic competitions, and is without doubt the biggest league in the world, spanning nine time zones and a distance of 7357km (4571 miles). 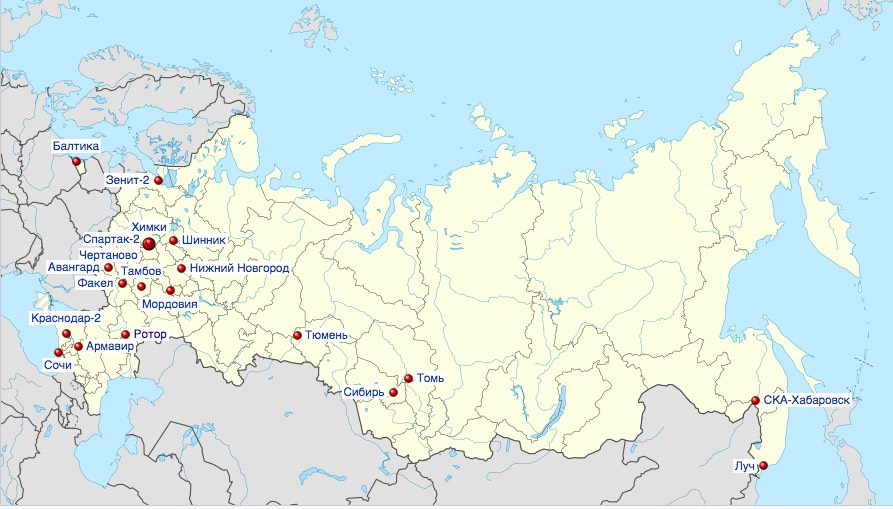 The history of football in the Volgograd goes back to its Tsaritsyn days, prior to the Great October Socialist Revolution of 1917.

Football has existed there since the days of the Nobel Town, which was an area in the north east of the city built in 1879 by the Nobel brothers for the workers at their petroleum company.

Amateur games began to appear at this multinational company towards the end of the 19th century as trade and industry brought with it ideas for recreation and leisure activities.

It was around this time that the rules of association football were exported from Britain and spread to Russia as they did to most other areas of the globe.

The early 20th century saw the game take hold slowly in Tsaritsyn. In those early decades there were barely enough players for a game, but collections of participants soon emerged among groups of factory workers, railway workers and students, again reflecting the spread of the game in other cities in Russia, and indeed worldwide.

The most established of these teams came from the metallurgical plant, DUMO. The team’s name was changed to The Republic, and again to Red October after the revolution. 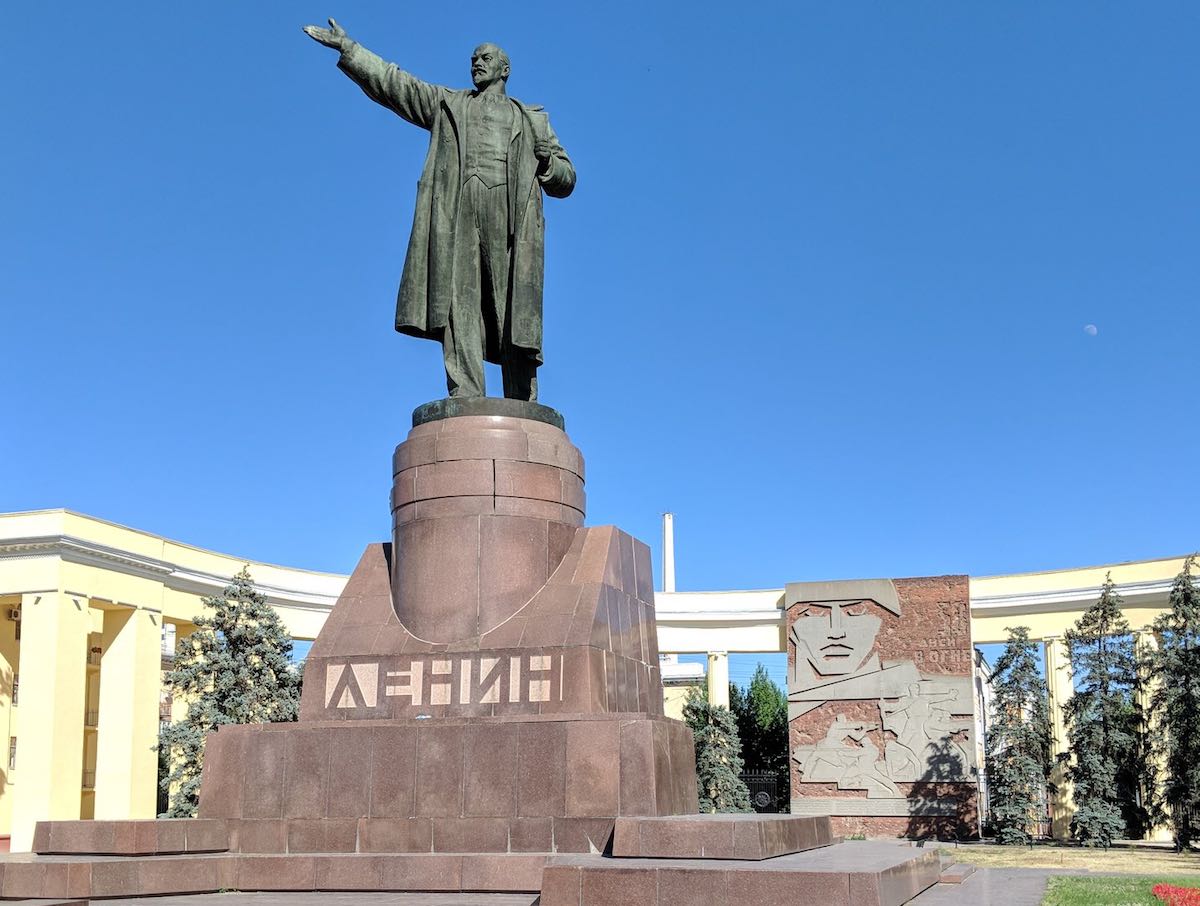 The Krasny Oktyabr plant is still in operation today, but was closed during the World Cup in a move which had the workers worried about pay.

The growth of the sport was stunted by two World Wars, but another club, Dynamo Stalingrad was created in 1925 in the new post-revolution state as one of a number of Soviet sports societies across the union with the same name.

The Dynamo club took part in the historical game among the city’s ruins just three months after the end of the Battle of Stalingrad.

Spartak Moscow, known as The People’s Club, were the visitors, and the game showed defiance among the rubble. It also demonstrated that there was still just enough of the city left intact to find an area for a game of football.

“The teams did not play football on the ruins, they played in the city, a major part of which was destroyed,” said Svetlana Argastseva, who is head of the State Historical and Memorial Preserves of The Battle of Stalingrad.

“Stalingrad was not completely ruined by the War, and there are still pre-war constructions in the south of the city today.”

A third Volgograd team was founded in 1929 at another industrial centre in the city, the Stalingrad Tractor Plant, under the name Traktorostroitel. As Traktor Stalingrad, they contributed several players to the Dynamo team in the post-battle game against Spartak.

After going through further name changes, this organisation would eventually become the Rotor club in 1975. It was under this guise that the club enjoyed its greatest success, and is the reason why the Rotor name is one which the city wants to associate with its football club. 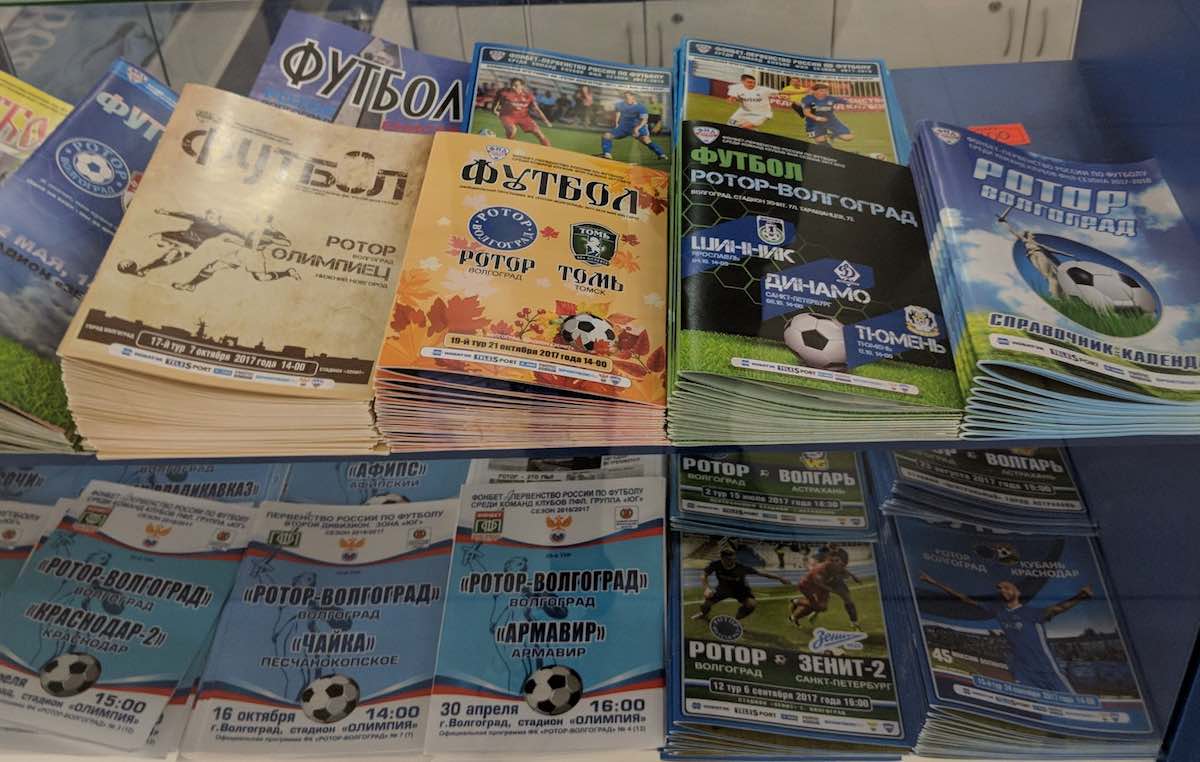 Their most famous victory came in the first round of the 1995/96 UEFA Cup, when they knocked out Manchester United on away goals.

The game is remembered as fondly as if they’d won the competition itself, especially as Rotor were knocked out by Bordeaux in the next round.


The next season Rotor reached the final of the Intertoto Cup, defeating the likes of Shakhtar Donetsk and Basel, before losing the final on away goals to French side Guingamp.

In 1997 they made it through the first two of the opening UEFA Cup qualifying rounds only to lose to Lazio in the second-round.

Their last appearance in Europe saw them enter the UEFA Cup at the second qualifying round in 1998 after finishing runners up to Spartak in the league table, but they were dispatched 4-2 on aggregate by Red Star Belgrade.

The downfall began shortly after, beginning with a 13th place league finish in 1999 and ending with relegation in 2004 when, in a double-blow, the club was also deprived of its status as a professional club due to financial problems.

It continued in the guise of its reserve team Rotor-2, and later reformed in an amalgamation with a newly created club, FC Volgograd.

In his thesis, Selling the People’s Game (2016), Manu Veth writes that “the poor state of repair of the stadium was one of the reasons why Rotor Volgograd began to struggle in the late 1990s and soon disappeared into the lower levels of Russian football.”

At least that issue has now been resolved. 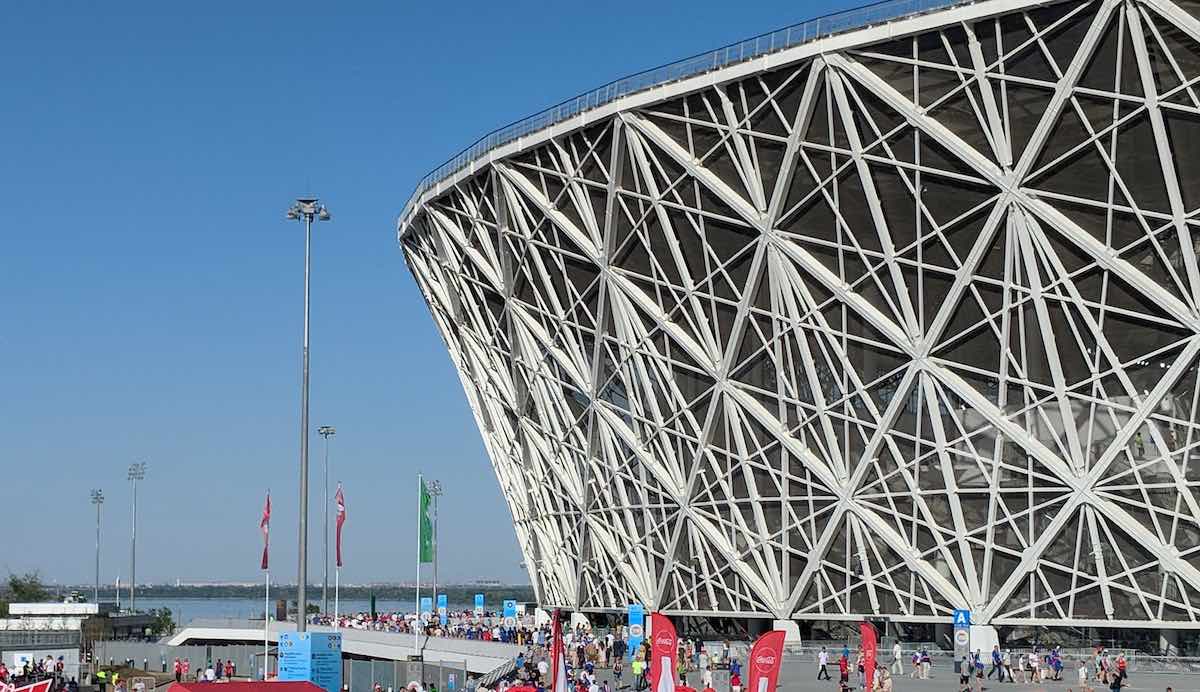 The reformed team experienced similar problems to the previous incarnation, and the government withdrawal of sponsorship in 2014 was the second final straw, and the club liquidated in 2015. Only to come back again, rebooting the Rotor name in the third division.

The decline of Rotor is a familiar tale, not just in Russia, but across the globe. Stories of clubs running into financial problems, and at worst going bankrupt and ceasing to exist, are common even in established capitalist states.

However, in established capitalist nations club owners know the landscape they are working within from the start, and any lack of funds is usually down to a sudden withdrawal of a major benefactor or simply poor planning and management.

In post-soviet Russia the landscape changed, and this coincided with the rise of Rotor and the club’s most successful period, but it would also lead to its downfall once the funding disappeared.

They were victims of their own success, but there was also much more to it. Soviet football clubs were funded by the state, either directly by the local administration, or via a nearby factory or organisation.

The best examples of this are the Moscow clubs. CSKA was the club of the Soviet Army, and to this day the club still list the Ministry of Defence as a shareholder.

Lokomotiv Moscow are more self explanatory, and were born from groups of railway workers and later taken over by the Soviet Ministry of Transportation.

After the collapse of the USSR at the end of 1991 these clubs were, in some cases, left in limbo as the state funding began to wither and disappear. This eventually happened to Rotor once the funds seen in that initial period of post-Soviet prosperity, which allowed them to compete with the Moscow clubs, began to wither away

The present day club is technically a reformed version of the original “giant killers” team, and the founding date remains 1929, rather than 2015. They’ve had to work their way around various administrative problems including bankruptcy, unpaid wages, and identity issues in an attempt to keep the Rotor dream alive.

But alive it remains, and with a new place to call home plus a city injected with football fever following the World Cup, now could be the best time to gather momentum and push for promotion to the top flight.