VAR From Perfect At The World Cup – But Is Perfection Needed? 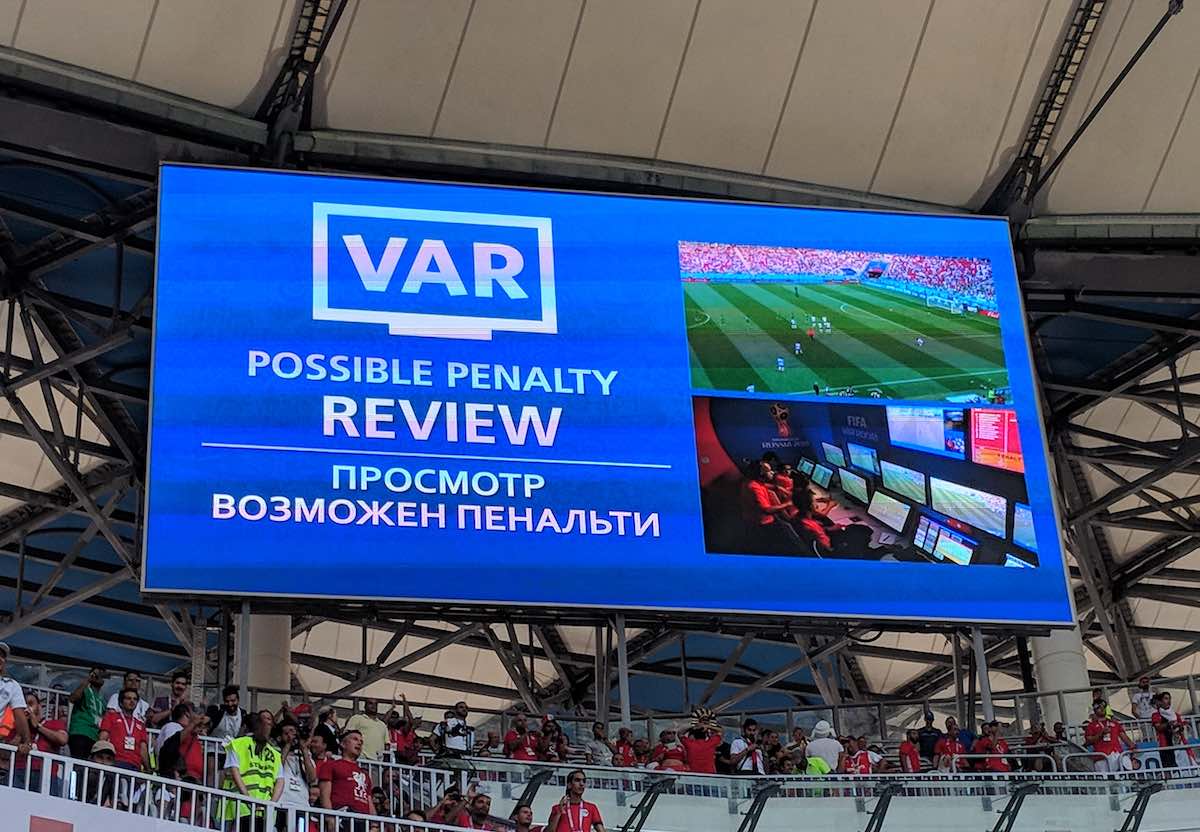 What has been the biggest talking point of the World Cup? Ronaldo vs Messi, and the endless debate of who is the real G.O.A.T? Whether Didier Deschamps can finally get things right with the enviable talent at his disposal for France?

Perhaps it’s the question of whether Brazil, despite defeat, have finally put their 7-1 defeat to Germany behind them, or whether Gareth Southgate’s bid to bring football home with England can be successful.

In truth, it’s none of those.

The words on everyone’s lips, from fans and pundits alike, are video assistant referee. Or more simply; VAR.

The officials behind the action taking place on the football pitch have already affected the outcomes of several group stage games. So many in fact, that this year’s World Cup has already seen more penalties awarded than any other in history, and all before the group stage has even come to a close.

So that means that VAR is working, right?

Detractors will tell you otherwise. ‘It ruins the beautiful game’, they might say, ‘a game played non-stop over two periods of forty-five minutes’, they might say. Which is a nice way to describe a game of football, especially to someone who has never watched it before. Though that, of course, would mean conveniently forgetting all those times play already comes to a halt through fouling, set pieces, and other unsavory methods of “gamesmanship”.

Instead of taking away from the game, VAR has arguably added to the spectacle. Not to mention, contributed to the correct decisions being made. For a prime example look no further than the meeting between South Korea and Germany.

At first glance, Korea’s opening goal looked to have been scored from an offside position and the goal was disallowed. This decision was massive, with Germany, the defending champions, chasing a win late on in the game.

However, VAR signalled for the referee to review the goal on the touchline monitor, with replays subsequently showing that the ball had found its way to Kim Young-gwon courtesy of the left foot of German midfielder Toni Kroos.

The result? A correct decision, resulting in a goal for South Korea, and the beginning of humiliation for Germany.

Without the aid of VAR, the original offside decision would have stood, leaving the scoreline 0-0, and Germany, (unjustifiably), with hope of scoring a late winning goal that would see them into the knockout round.

Of course, like most things in life, VAR is not perfect. The human element that was already the source of heated post-game debates remains, the main culprit being interpretation. Deciding if a goal should be disallowed due to offside is one thing, but awarding penalties is another.

Case in point: Iran vs Portugal. A game that provided not one, but two, big talking points in which VAR took central stage. The first incident involved Portugal’s star man Cristiano Ronaldo. While maneuvering his way past Iran defender Morteza Pouraliganji, the Iranian went to ground and though play continued, VAR was called into action, and the referee was directed to take another look at the incident. Enter the realm of interpretation.


Replays showed that there had indeed been contact between Ronaldo and Pouraliganji, with the Portuguese’s elbow making contact with the Iranian’s face. But was it enough to warrant the reaction from Pouraliganji? Was there intent on Ronaldo’s part to deliberately elbow his opponent?

When you start asking these questions you can begin to see the obstacles VAR must overcome to win over those who remain unconvinced.

In this instance a foul was indeed given, and Ronaldo was shown a yellow card. And though some suggested the Portuguese captain should have been given a straight red card, again that word pops up: interpretation.

The second talking point was over a handball that resulted in a penalty being given to Iran. Replays showed that the ball had in fact connected with the hand of Portugal’s Cedric, all be it from a close range header by Iran’s Azmoun.

However, was it deliberate? The decision looked somewhat harsh, but in the referee’s mind it was a penalty. The decision resulted in Portugal going on to face the unbeaten Uruguay in the round of sixteen.

Had Portugal defeated Iran they would have instead faced the hosts Russia in the next round. Two very different teams; and another decision made with the help of VAR.

These are just three of the many decisions that have involved the use of VAR at this summer’s World Cup, with the benefits – see South Korea-Germany – clearly on show.

What VAR has also shown however, is that even after technology has been called upon, there will always be those watching at home on a television screen who do not agree.

The point of all this, is that whilst VAR is far from perfect, along with goal-line technology, it is the best that is currently available, and is without question a valuable asset to assist referees in making crucial, game-changing decisions.

With the group stage now over, and each remaining nation at the very least ninety minutes away from heartbreak or triumph, VAR will become ever more valuable while undoubtedly providing a watching audience with more drama than previously seen before.