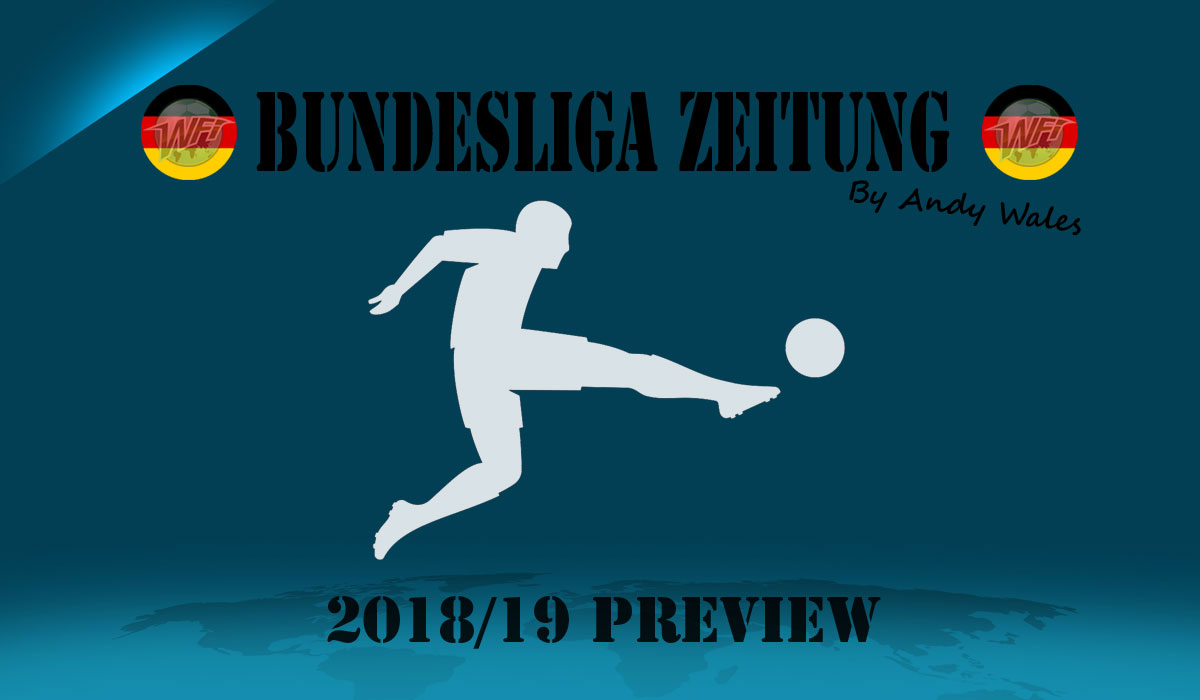 It’s that time again! Another Bundesliga season is upon us.

I wanted to look ahead and perhaps glance back as we prepare for what could prove to be a defining campaign in Germany.

With Bayern Munich having won their sixth consecutive Bundesliga crown and reigning world champions Die Mannschaft having calamitously crashed out of the World Cup at the group stage, Germany needs a shot in the arm of something new.

Jogi Löw’s side suffered from predictability. An accusation understandably pointed towards the Bundesliga when it comes to the title race.

Germany, to my mind, also showed a touch of complacency that proved fatal, and if Bayern do the same, it’s up to the chasing pack to punish them the way Mexico and South Korea did to the national team.

Niko Kovac, who did such an impressive job at Eintracht Frankfurt, is now the man in charge at the Allianz. It will be interesting how he performs in his first big job in club football.

He won the Bundesliga with Bayern as a player and will be expected to do the same as a coach. However, this Bayern side is ageing in parts and need of transitioning if it is to once again rule Europe.

Schalke’s Leon Goretzka has joined, but more young blood will be required for a team with too many players either fast-approaching or now the wrong side of 30.

Arturo Vidal has already left for Barcelona and Jerome Boateng is rumoured to be leaving too. Finding the right balance of experience and youth could be the key to Bayern achieving their goals.

That being said, you would have to be a brave person to bet against Bayern once again retaining their title. So perhaps this season is really about the others. Can the likes of Schalke, Dortmund, Leipzig, Leverkusen and Hoffenheim capitalise if the champions slip up?

At Schalke, Domenico Tedesco did a fantastic in his first year in charge, guiding the club to an unlikely second place. Gone are Max Meyer and star midfielder Leon Goretzka, but the quietly impressive striker Mark Uth has joined from Hoffenheim.

Omar Mascarell has also been recruited from Franfurt and will look to fill the void in midfield and Salif Sane will aim to add solidity to the back-line.

Emulating his first season will be a tough enough task for Tedesco, to go a step further and actually win it appears too much to ask at this juncture.

Last season, Leipzig struggled to replicate they made in their debut Bundesliga campaign. It ended with the departure of coach Ralph Hasenhüttl and, to the surprise of many, the announcement that Julian Nagelsmann will take over next summer.

In the interim, sporting director Ralph Rangnick will be at the helm.

His credentials as a coach are proven, but coupled with the loss of star player Naby Keita, question marks over how successful this ‘holding year’ can be are valid ones.

Massive upgrade for Leipzig selling Keita and bringing in Rudy as his replacement. Great player. pic.twitter.com/q8idRTHmph

Similar can be said for Hoffenheim, everyone at the club knows that current boss Nagelsmann will be off at the end of the season.

It could be a celebratory final year for the young coach that transformed a struggling team into a side that now expects to finish in the European positions. Equally, it could have an unsettling effect and prove to be a tumultuous period.

To even challenge for a European spot was exceeding expectations for Leverkusen last season. Kevin Volland got back amongst the goals, Leon Bailey broke through with his explosive talent and Julian Brandt proved he can handle the level of hope and responsibility thrust upon his young shoulders.

Leverkusen can be fun to watch but can also be brittle at the back, particularly on set pieces, and lack the consistency required to mount anything like a serious title challenge.

Of the potential contenders, that just leaves Borussia Dortmund, a club I visited this summer.

Following the departure in January of Pierre Emerick Aubameyang and the subsequent loan of Michy Batshuayi ending, Dortmund lack an obvious goal scorer. It could mean relying on Max Philipp and Marco Reus for goals, although Jadon Sancho, Christian Pulisic and new signing Marius Wolf will be expected to contribute.

With the tactically astute Lucien Favre now in charge and his record of developing talented players, Marco Reus can pay testament to that after their time together at Borussia Mönchengladbach, perhaps he has enough at his disposal to upset the odds.

Despite the apparent lack of a focal point in attack, it’s a beefed-up Dortmund that will need to consistently hit the heights.

🗞 Our favorite news of the day 🗞

52% of German football fans like BVB 👀 (survey by Statista)

I think it goes without saying that the Bundesliga desperately needs a different winner this year.

Commercially, it helps if the league is seen as competitive, when selling the product around the world.

The Bundesliga already has a well-earned reputation for its incredible stadium atmospheres and fan interaction; it is also rightly lauded for its nurturing of talent and aesthetically pleasing playing styles, but to add competitive title races and different champions to the mix could be what makes it appreciated that bit more.

The breaking of Bayern’s title reign would not only be good for the Bundesliga commercially, it would also be good for it domestically, to bring hope to fans of all the other clubs that this giant can be defeated.

I believe it would be good for Bayern too, because I think they need it to reinvigorate them, just as much as their rivals.

For too long, Bayern have been the heavyweight in a middleweight division. A fighter without viable opponents can become stale.

It’s up to the likes of Dortmund and Schalke to prove they can step up a weight class and trade hands. Perhaps even a rank outsider could deliver an underdog story that Hollywood would be proud of.

Jürgen Klopp once told his Dortmund players they were Rocky Balboa and Bayern were Ivan Drago. You could argue any challengers overtaking Bayern this year would be like Rocky facing Ivan Drago, Apollo Creed and Clubber Lang, all in the same night.

However, I’m quietly optimistic we might just get our movie this year.