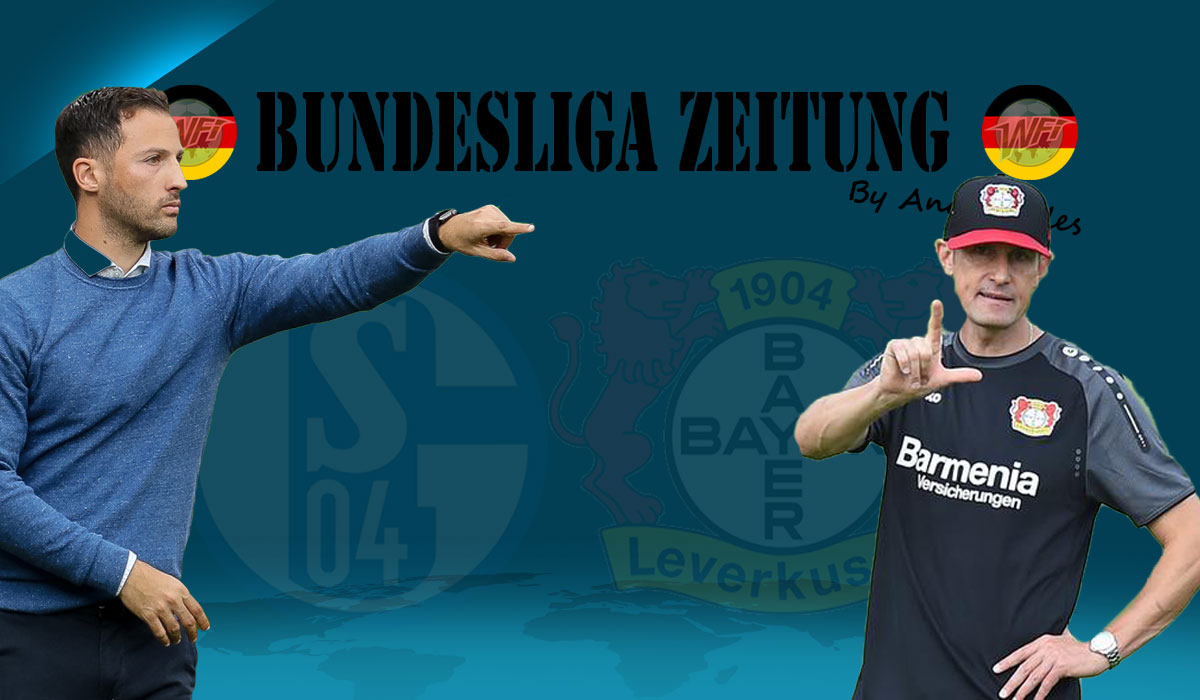 Pre-season expectations for Bayer Leverkusen and Schalke were high. It’s fair to say that in these early weeks of the season, those expectations have been far from matched.

For Leverkusen, defeat in their opening two fixtures came as a surprise particularly given the opponents. An away trip to the Allianz in search of their first points of the season was hardly what they needed on a return to action following the international break.

Whilst few (other than perhaps the most optimistic of Leverkusen fans) would reasonably expect anything other than a Bayern win, rumours over the future of Leverkusen coach Heiko Herrlich had begun to surface.

In response to this, Leverkusen sporting director Rudi Völler came out publicly in defence of his coach. In an interview during the international break, he said he found it strange that of all the teams on zero or only a point after two games, Herrlich was the only coach being questioned. He went on to state that “this hysteria” annoyed him and point out that other ambitious teams were in the same position; perhaps alluding to Schalke here.

The 3-1 loss to Bayern will not have altered this stance from Völler, and rightly so. Leverkusen took an unlikely lead from the penalty spot but were ultimately overpowered by the champions, as most teams are. The Karim Bellarabi red card for a nasty tackle on Rafinha was unnecessary and only aided Bayern to eventually net their third goal in the closing minutes.

Criticism of Herrlich has been justified and his tactical nous may not be that of those in charge of his competitors at the top, but he does deserve the opportunity to turn this around. Last season, Leverkusen narrowly missed out on Champions League football in a season where the plethora of young attacking talent in the squad came of age. That’s an important factor to consider when assessing the achievements of last season.

Last summer, it was plain to see that there was potential in the squad, but consistency is difficult thing to count on with young players yet Leverkusen’s youngsters found an impressive level of consistency for their age. Their long-standing defensive deficiencies, particularly at set pieces, were what held them back from finishing higher.

Upcoming games at home to Mainz and then away to Fortuna Düsseldorf will be much more telling and potentially decisive to Herrlich’s future at the BayArena. Failure to win either of those games ahead of hosting Borussia Dortmund would see Völler under intense pressure to act.

Herrlich has an unspectacular record as a coach. His brief tenure at Bochum was far from impressive and the same could be said of his year in charge of Unterhaching. However, his season and a half at SSV Jahn Regensburg was more fruitful, leading the club to successive promotions and into the second tier of German football. Bayer Leverkusen is obviously a big step up from that and then next few weeks could career defining ones for Herrlich.

As Völler was likely alluding to when he referred to other ambitious Bundesliga clubs, Schalke have not had the start to the season they wanted, nor expected.

The Saturday evening game saw Domenico Tedesco’s Schalke make the short trip to Mönchengladbach. Tedesco had rightly received a lot of praise for guiding Schalke to a surprise second place last year but replicating that achievement has so far proved difficult. Tedesco caught the eye with his tactical awareness and ability to make Schalke generally tough to beat. However, it was clear that they were much more suited to defending a lead than chasing a game.

Therefore, conceding first in each of their games this campaign has seen Tedesco’s game plan go out of the window and leave them more open than they are comfortable with. So, to concede in less than three minutes against Gladbach was hardly what Tedesco and Schalke needed. The lack of defensive organisation as Matthias Ginter headed in that opener will have irritated Tedesco even further.

Credit must go to Dieter Hecking for the Foals positive start to the season and how well they handled Schalke in this 2-1 victory. It was nice to see Patrick Herrmann back amongst the goals after a challenging few years in a career that once looked so promising.

Whilst Hecking, Ginter, Herrmann and Gladbach are enjoying their renaissance, Tedesco will be feeling the weight of pressure and expectation that comes with success.

Tedesco: "The players currently in better shape are more acclimated to this style of play. In the future, we want to go back to working on our short passing game once we regain our confidence." #S04 pic.twitter.com/9N84Mjhmyk

All of this has hardly been the ideal preparation for Schalke ahead of them kicking off their Champions League campaign in a group they are expected to progress from. So, just as it is for Herrlich, the next few weeks for Tedesco could be defining ones, even if the level of scrutiny and pressure upon his position will justifiably not be that which Herrlich might be facing.

Both coaches will be looking to turn the corner very quickly in this latest chapter of the Bundesliga story and will hope their part in it does not come to a premature end.