Cillian Sheridan On Facing Barcelona & The Quality Of Cypriot Football 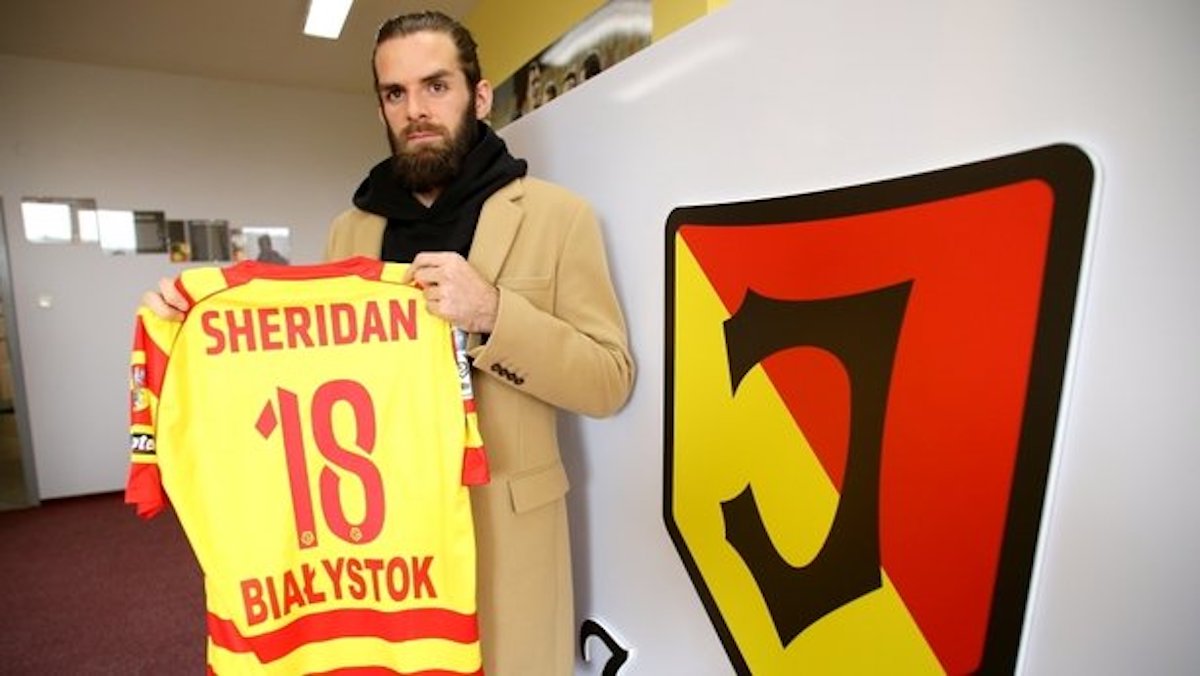 James Rowe recently interviewed Jagiellonia Bialystok striker Cillian Sheridan. They discussed his current club, his time at Celtic in Scotland, and a successful period with APOEL Nicosia in Cyprus.

You signed for Jagiellonia Bialystok in 2017. How are you enjoying your time there, and how would you describe them as a football club?

Yes, it’s going good. I was excited to get a change in culture and football because I think I needed it.

I came to Białystok in Poland to a well run club. I have enjoyed my time here so far.

Jagiellonia has a small group of people working at the club and therefore you know who everybody and is.

It is not a big city but Bialystok is a big catchment area, so I believe that the nearest team and city would be Legia Warsaw .

Most clubs I have been at in the past have had two teams in the city at least. You know here that the whole city is behind the club.

You spent a total of four seasons at Celtic FC. How do you look back on your time there?

Celtic FC was where I started my career, and I was there for four years, but for my last two years I was pretty much away on loan during that period, and only at Celtic FC for pre season.

It’s obviously a massive club and I probably did not realise how big of a club and what it meant at that time.

I had a different upbringing in terms of football when I was younger. I did not come through academies, and maybe that served me well, because I went in not knowing anything really, and there were not the expectations and pressure of having out my whole life into it.

I finished school and I went over to Scotland and everything was new to me and I believed that helped me to adjust to my new environment.

You are probably most well known for your successful time at APOEL Nicosia, winning two Cypriot League titles and Cypriot Cups.

I remember watching you play for APOEL against Ajax in Amsterdam in the Champions League in December 2014. How do you look back on your time in Cyprus?

I would say that my time at APOEL was the most successful time I have had in my career so far in terms of winning things and playing Champions League and Europa League football.

I admit that when I went to Cyprus I underestimated the league. It was a better standard than I anticipated.

The top five or six teams can all play good football. They have good players and they can generally handle themselves against other European teams and qualify for European football.

The standard of football in Cyprus is not what we think from the UK. We do not really look at any other leagues outside of the UK.

You can see this season that AEK Larnaca and Apollon Limassol are playing in the Europa League, and in my opinion AEK Larnaca have been very close the last few years.

Looking from the outside I would say that they are the most professionally run club in Cyprus. They structure everything and they work within their means. They do everything the right way and it was great to see them get that success from it this season in the Europa League.

I like to see Cypriot teams do well because it backs up what I try to say to people that they are not the ‘Mickey Mouse teams’ some people think they are.

You have played with many good players throughout your career in different countries. Could you tell me the players that you have played alongside that have stood out for you?

There have been a few. I would like to mention that better players that I did not know about.

At APOEL there was Gustavo Manduca. He was a Brazilian who also played for AEK Athens.

At Omonia Nicosia I played with Nuno Assis who was 36 when I went there, and he was still one of the best players in the Cypriot League.

As a striker as well they are the players that made a good impression because they would see my runs and appeared to be a level above in terms of ability.

Are there any particular opponents that have stood out. You mentioned playing Champions League and Europa League football?

During the season I played Champions League football with APOEL, we played against Paris Saint-Germain with David Luiz and Thiago Silva, and FC Barcelona with Gerard Pique. I also thought that Marc Barta was a very good player.

When we played at home against FC Barcelona, nearly every time we would pass the ball or had a throw in, and I was up the pitch ready to make a run, as soon as the pass happened the Barcelona back four were all pushing up, with their forwards applying pressure, too.

Their movement was very impressive and they were defending without having to defend, basically.

I must say when you get to that level it is just how well defenders can all read the game and not having to match last ditch tackles or getting dragged out of position.

Finally, Cillian, who are the managers that have influenced your career the most?

I would say that the biggest and most important was Gordon Strachan at Celtic, just because he gave me a chance at the club and that started me out on the road to becoming a professional footballer.

Under another a manager I might not have played at all. It can be quite difficult to go from being a youth team player to getting that next professional contract.

At APOEL we had Giorgos Donis who was tactically very strong.

At Omonia Nicosia I had Vladan Miloievic who is now manager of Red Star Belgrade.

I remember under him if we went into a match with the intent not concede a goal we could do that, he was very impressive in that regard.

Also at Omonia Nicosia we had John Carver. I really enjoyed having him as my manager because he would do a lot of work with the strikers on our movement and finishing.

He was one of the managers that was the most beneficial to me in my career so far.