Boos As Neymar Injured After Eight As Brazil Beat Cameroon 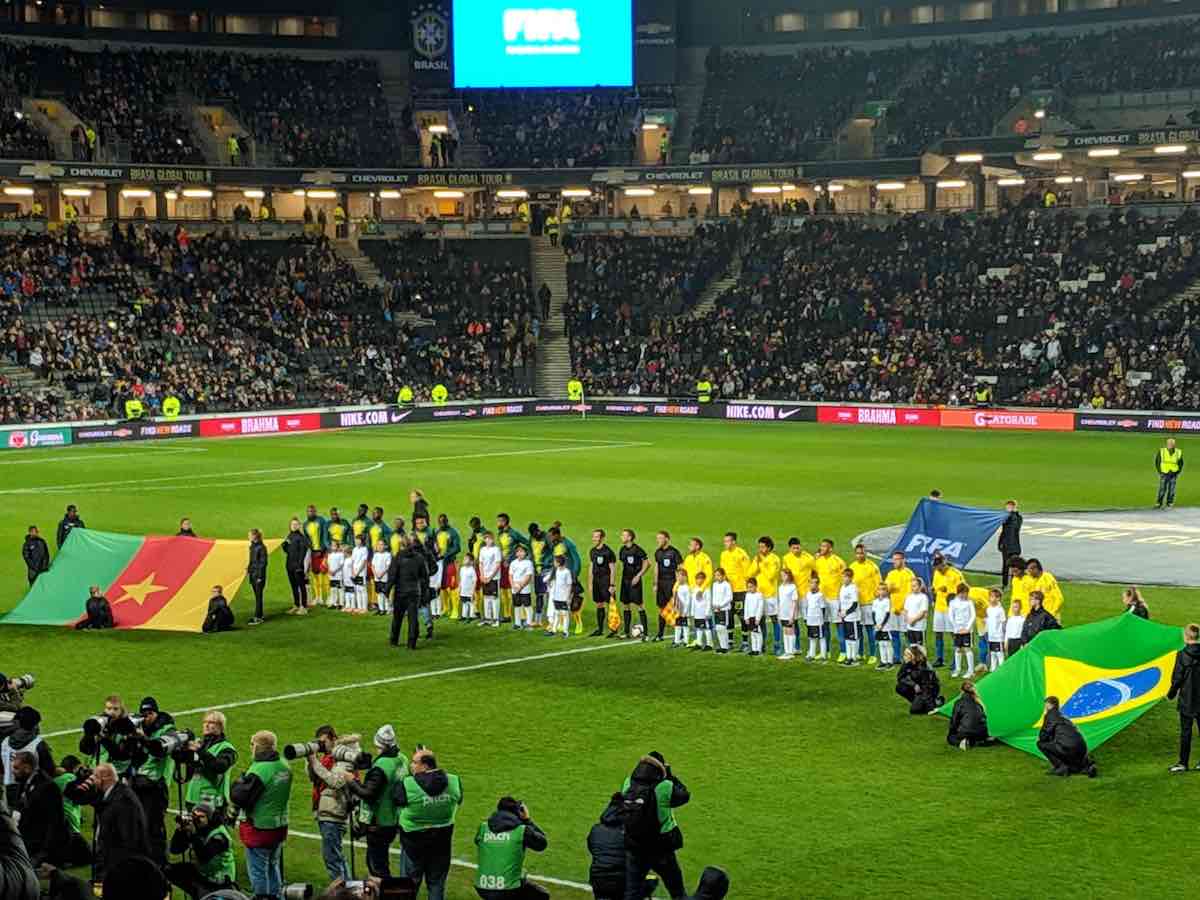 Football fans at the Stadium MK were disappointed as Neymar left the field injured with just over five minutes of the game gone.

But they were still entertained, as Brazil managed a 1-0 win against a Cameroon side managed by Clarence Seedorf who says he has “Brazil in his heart”, having spent time there at the end of his playing career.

Or reporter James Nalton was in Milton Keynes to report on the action.

What is football legend Clarence Seedorf up to these days?

He manages Cameroon, who tonight played Brazil in Milton Keynes.

The Suriname-born Dutchman spoke for many people when he said:

“I have not played in Milton Keynes before, so this is different for me – but the stadium is great and I am looking forward to the game.”

It was a cold one. Winter well and truly arrived following the UK’s Indian summer, and for the first time this season there was no doubt as to whether hats and gloves were needed in the stands.

The game was part of Brazil’s global tour, which has now ticked Milton Keynes and the impressive Stadium MK off its list. 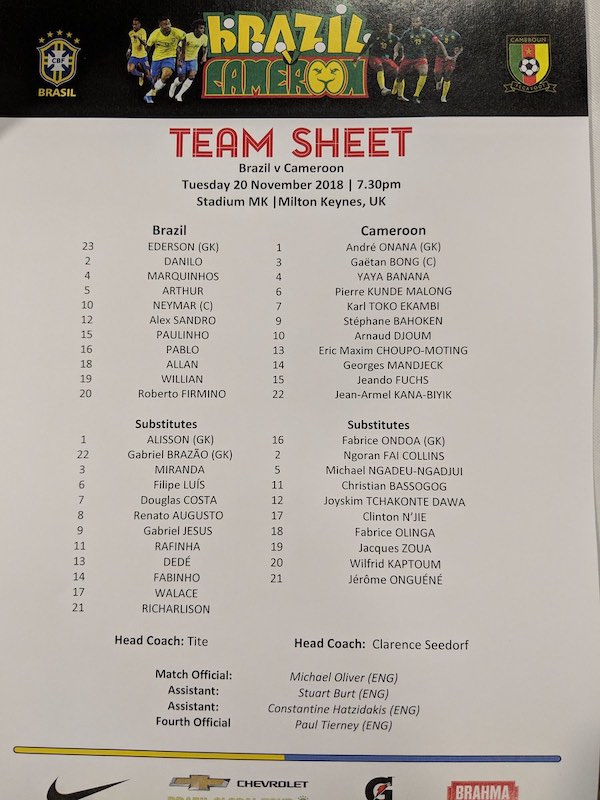 The touring side started slowly and the game came to a halt completely with just over five minutes gone when Neymar went down injured.

Boos greeted him as he left the pitch, more due to the fact the fans wanted to see more of him rather than any hostility towards the player himself.

He was replaced by Everton forward Richarlison who looked equally capable of making things happen.

The 21-year-old played from the left like Neymar, and covered plenty of ground. It was he who opened the scoring just before half-time, getting his head on Willian’s corner to power the ball into the net just seconds before the whistle blew for the break.

Cameroon looked dangerous at times, and would have posed even more of a threat to the Brazil defence had they been able to better control the ball in the final third.

However, some of their ineffectiveness was due to Brazil’s ability to close down the space, and the man, quickly. 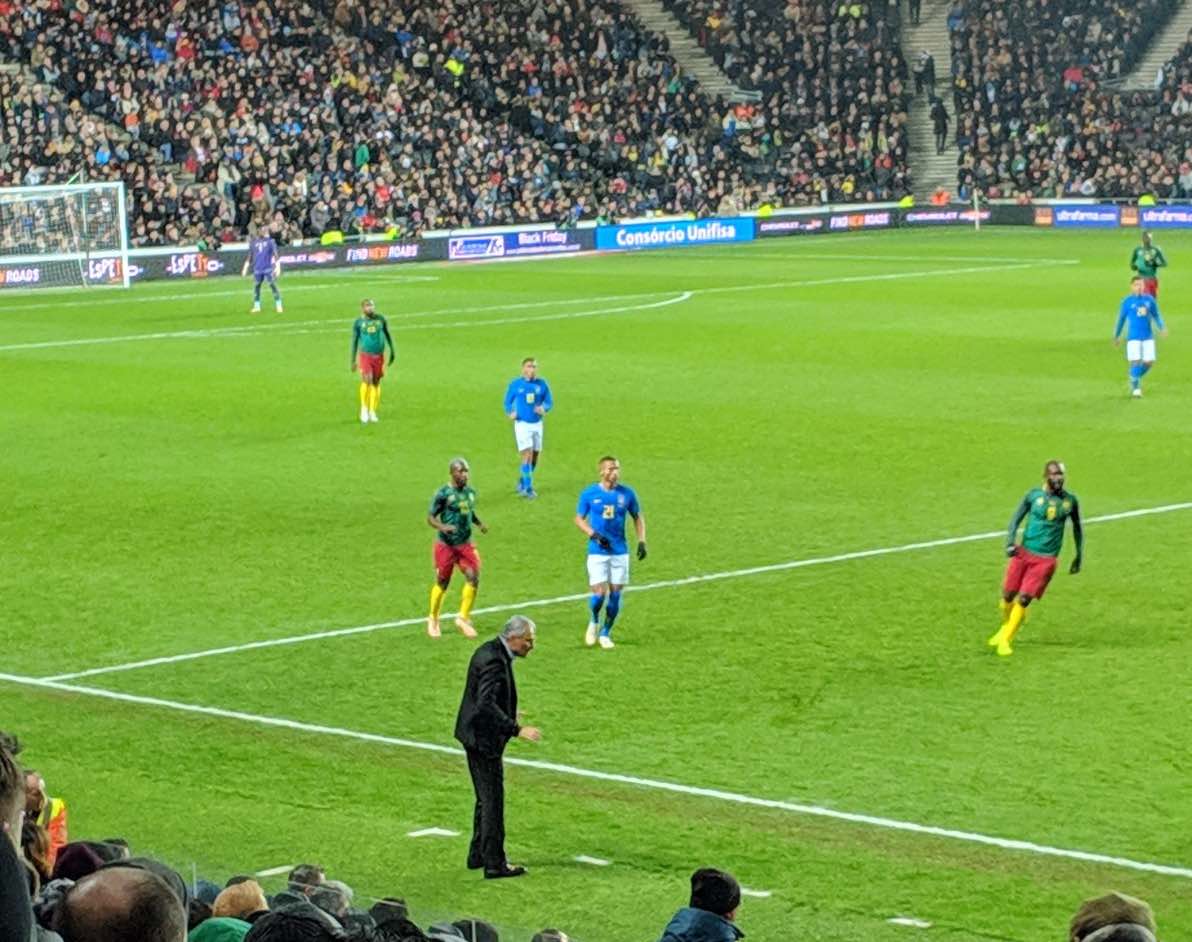 Gabriel Jesus replaced Roberto Firmino at half time, and the Liverpool man will have been disappointed to not have finished the couple of good chances which came his way in the first 45 minutes.

But Jesus continued where Firmino had left off, and was only able to hit the post having rounded fellow half-time substitute, Fabrice Ondoa.

Ondoa already has 41 caps for his country, but initially looked less assured than less experienced Ajax stopper André Onana who started the game and made some smart saves in the first half.

However, Ondoa went on to make some impressive stops towards the end of the game to keep the score at 1-0. His double-save from Jesus and Richarlison was particularly good.

Douglas Costa also entered the fray in the second half to liven up proceedings, but even his tricky dribbling was not enough to create a second. 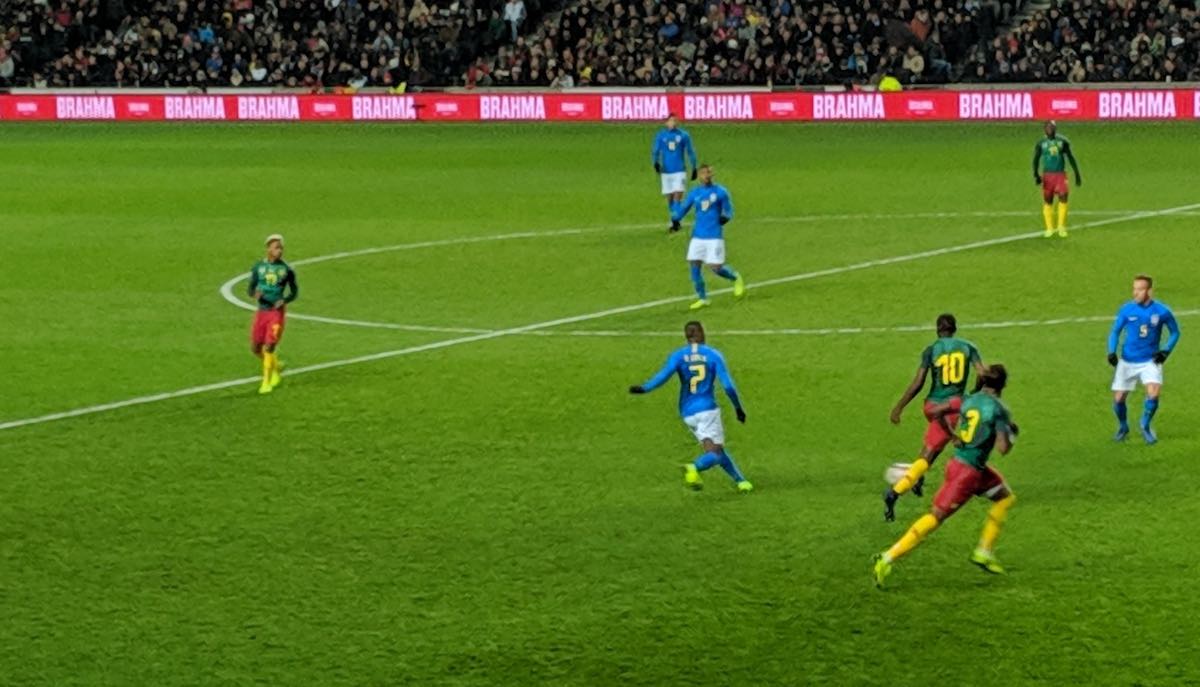 WFi favourite Arthur came closest with a shot from distance which it the bar.

It was a test for Seedorf, but one he and his team stood up to. Their 4-4-2 diamond formation had most of the pitch covered in attack and defence, they just need to do more once they arrive in the attacking areas, and be more clinical in genral.

This was demonstrated in the dying minutes when they hit the bar during a scramble in the Brazil area.

Seedorf ended his playing days in Brazil with Rio de Janeiro based side Botafogo, where they pronounced his name with an extra “ee” on the end.

He might have played for longer were it not for an offer he couldn’t refuse — managing Milan, the team where he had enjoyed the best moments of his playing days winning two Serie A titles and two Champions League’s during his time there.

Massimiliano Allegri was sacked by Milan and in January 2014 Seedorf abruptly ended his playing career having just helped his side qualify for the biggest club competition in South America, the Copa Libertadores.

It was a shame that Botafogo didn’t get the guidance of their experienced Dutch talisman in that 2014 season. They exited the Libertadores in the group stage, were relegated to Serie B, and by the end of the season Seedorf had been sacked by Milan.

After stints with  Shenzhen F.C. and Deportivo de La Coruña, the 42-year-old is rebuilding his reputation as a manager in charge of Cameroon, and tonight’s game will do him no harm. 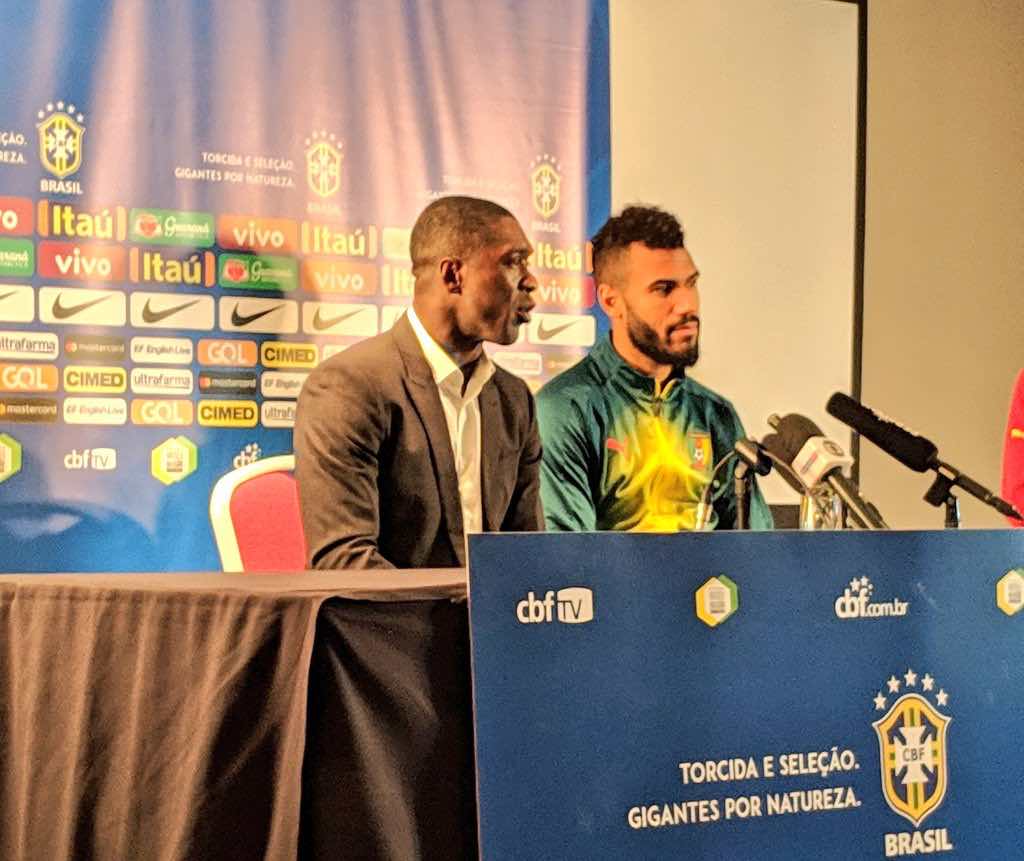 “I have a lot fo friends on the other team, people I know in staff, the coach and some players,” said Seedorf after the game.

“Brazil is in my heart. I have many friends from Brazil so this was a real friendly match in a competitive environment.”

The coach is now looking ahead to the 2019 Africa Cup of Nations which will be held in Cameroon, and summed up the atmosphere in the camp when he said:

“I find [the job] more and more interesting and more exciting. The group has given us so much energy and enthusiasm it’s a pity to stop the camp every time we have to go home.”