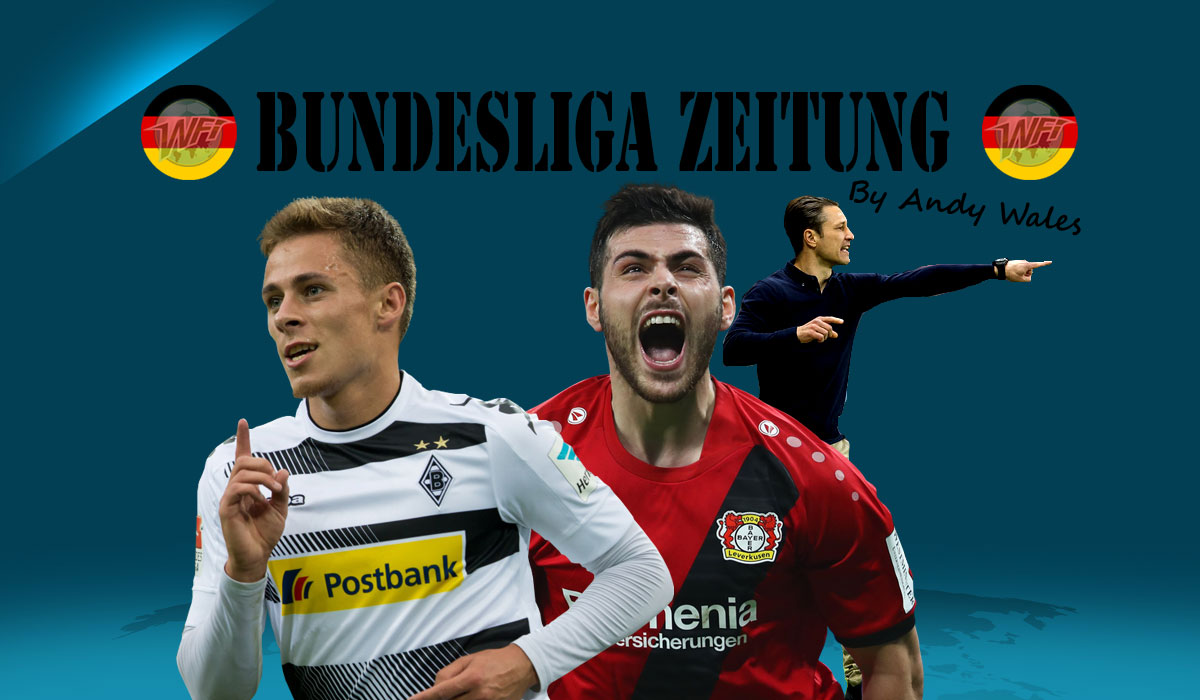 This narrative surrounding this past week of Bundesliga action was largely one of pressure.

Pressure of expectation, coaches under pressure, the pressure to turn around bad results, and even pressure to maintain good ones.

Borussia Dortmund were under pressure to maintain their great start to the campaign and follow up the dramatic victory over Bayern with a win away at Mainz.

Lucien Favre and his side duly delivered with a hard fought 2-1 win thanks to a winning goal from the unlikely source of Lukasz Piszczek. Mainz had equalised through Robin Quaison, just minutes after Paco Alcacer had rounded off a move involving Jadon Sancho and Marco Reus to give Dortmund the lead.

Borussia Mönchengladbach have outperformed expectation so far this season. It’s fair to say that nobody expected them to be the closest challengers to the league leaders at any stage, let alone after twelve games. But that’s exactly where they are, and pressure was now in the form of whether or not they can keep this excellent run going.

Gladbach were immediately tested, as Hannover incredibly took the lead through Bobby Wood after just 20 seconds! However, Dieter Hecking’s team soon settled and his potent attack and quickly fired back via Thorgan Hazard. Further goals from Michael Lang, Lars Stindl and Denis Zakaria capped off a fine 4-1 victory and kept Gladbach second in the table.

It’s been a different type of pressure for Schalke and Bayer Leverkusen this season. Both clubs have failed to live up to their pre-season billing, leaving questions to be asked of their respective coaches Domenico Tedesco and Heiko Herrlich.

Tedesco, who had such a successful first year in charge of Schalke, has struggled to match last season. As yet, his job has never been reported to be under threat, despite questions beginning to be asked of his ability to progress from that debut campaign. Positive results in the Champions League have certainly helped, as did a weekend win at home to Nürnberg in a seven-goal feast.

For Herrlich, the pressure has been much more intense and his job has been rumoured to be hanging by a thread. Recent defeats to Hoffenheim and Leipzig meant that Friday night’s game at home to bottom of the table Stuttgart was a must-win for the under-fire coach.

A Kai Havertz inspired Leverkusen turned up for their coach. The young play-maker was instrumental in Kevin Volland scoring a brace and Die Werkself winning 2-0. It may only be a temporary reprieve for Herrlich, but still a welcome one. That will be scant consolation for Stuttgart ahead of a cliched ‘six-pointer’ game against fellow strugglers Nürnberg.

Havertz then provides the assist for Leverkusen’s opener with a lovely dink to the back post and Volland.

What a special player at 19.

Despite the pressure being on for all those I’ve mentioned, it arguably pales in comparison to that being felt by Bayern München coach Niko Kovac. The reigning champions’ on and off field dirty linen has been washed very publicly, leaving Kovac under considerable scrutiny.

Following that defeat in ‘Der Klassiker’ to Dortmund, it looked like Bayern had the perfect opportunity to get back on track by hosting lowly Fortuna Düsseldorf.

Things looked ominous for Düsseldorf as a strong start from Bayern resulted in two early goals for Niklas Süle and Thomas Müller. However, Fortuna refused to lie down and were plucky and resilient, fully deserving of Dodi Lukebakio’s strike just before half time.

The fact Düsseldorf even displayed the belief they could get back into the game is not only to their credit, but also testament to the vulnerability that opponents now smell in Bayern.

Müller scoring his second and Bayern’s third goal would previously have signalled game over, but not with this current set-up. The visitors continued to plug away and again found an avenue back into proceedings as Lukebakio netted his second.

With just seconds remaining and all three points seemingly heading to the defending champions, a quick break ended with Lukebakio sealing a memorable hat-trick and Düsseldorf earning an unlikely equaliser.

The face of Kovac at the final whistle said it all and it didn’t take long for the German media to find Uli Hoeness for his thoughts. Kicker quoted him as saying that the future of Kovac was not an issue “at the moment” and that they will have to analyse the situation after the game against Benfica in the Champions League.

I always felt the trust and assume it will continue that way – Niko Kovač.pic.twitter.com/Wiw5FRiFtN

The pressure cooker that Kovac is in is clearly edging closer to boiling point. As I’ve said before, the problems at Bayern run much deeper than the coach and it’s easy to feel sympathy towards Kovac.

The feeling was that a defeat against Benfica may have resulted in Kovac being relieved of his duties, but a depleted Bayern rallied and crushed Benfica 5-1. Veterans Arjen Robben and Franck Ribery peeled back the years with their goals, but Bayern can’t keep looking back and whomever the coach is come the summer, there’s a lot of turnover required in the squad.

Rumours are rife in the German press that the club are preparing to spend lots of money in the summer transfer window, but it’s difficult to see how spending two hundred million Euros on a handful of players will heal and harmonise the fractures throughout the club.

Kovac has had a stay of execution with the convincing win over Benfica that ensured qualification to the knock out stages of the Champions League, but anything other than a win at Bremen this weekend will see the pressure ramped right back up.

For the Bayern board, that pressure would possibly be too much in this unpredictable Bundesliga season.

Dominic José Bisogno: Academia Rey And The Promise Of Football In Lara