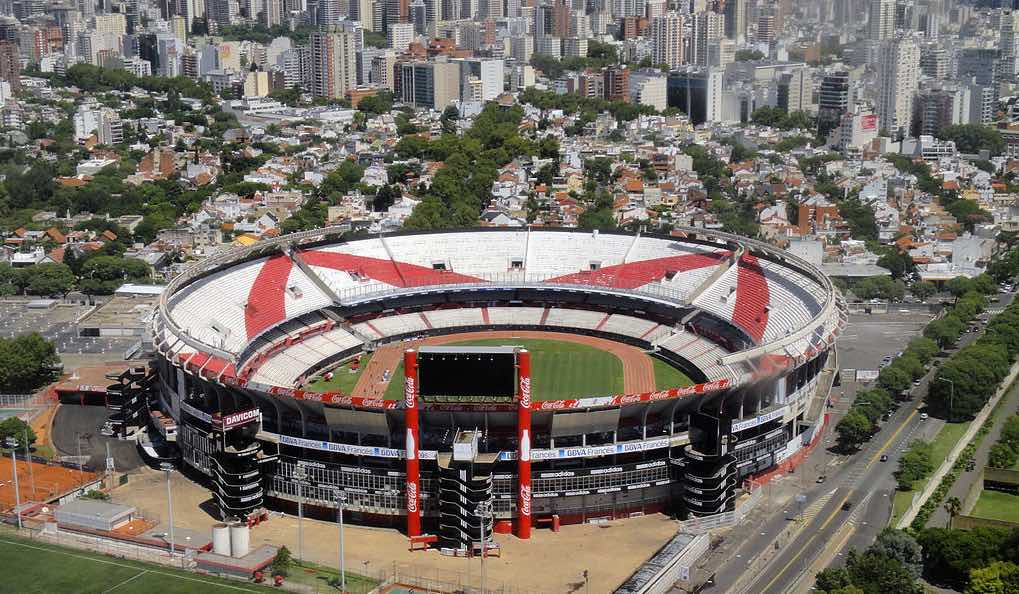 Monday 26 November was supposed to be a very special day for the fans of either River Plate or Boca Juniors.

A new working week was meant to begin with one of the two famous teams in ecstatic mood having beaten the other in the historic Copa Libertadores final just two days before.

Instead, from offices to bus stops, and cafés to schools, Argentines were united in reflecting on how yet another big occasion had been ruined by scandalous violence.

On 11 November, the first game of the two-legged final between the Buenos Aires giants produced a brilliant 2-2 draw that sent a positive image of South American football around the world.

The return leg, yet to be played, will be remembered more for the violence that marred the streets of Buenos Aires on 24 November.

Two hours before the 5pm kick-off, the day was unfolding as expected with a carnival atmosphere around both the River Plate stadium in Nuñez, and around the Boca team hotel in Puerto Madero.

However, during Boca’s short bus ride between the two neighbourhoods, the party ended abruptly and things turned very ugly.

The team bus was led by a police escort down the busy Libertador Avenue adjacent to El Monumental stadium, a street packed with home fans on match days. When it turned off to complete the final few hundred metres of its journey, it was pelted with objects by River Plate fans who had inexplicably been allowed to get within ten metres of the vehicle by the police.

The consequences were disastrous. Most of the windows were smashed, and players were hurt by glass, rocks, and the tear gas the police were apparently using to repress the disturbances.

Alarmingly, the driver fainted and Boca’s Vice-President had to take the wheel and complete the traumatic final minutes of the journey.

Once in the stadium, Boca players looked more like civilians escaping a chemical weapons attack in a war-torn country than athletes arriving for football game.

Chaos then ensued for the following four hours, as a stand-off began between CONMEBOL and FIFA who were eager for the game to take place regardless, and Boca who were adamant they were not in conditions to play the biggest match in their history.

The visitors had a very valid point, as amongst the injured was their captain Pablo Perez who had to see an ophthalmologist and emerged with an eye-patch from a local hospital. Others reportedly vomited as a result of inhaling the tear gas.

River Plate sided with Boca and agreed to suspend the game for the following day, but this decision was not made official until after 7:30pm local time.

The wrangling over whether the game should take place lasted over four hours, and the fans had been seated for over six hours in the sunshine waiting for the fixture to start, after it had been pushed back to 6pm, then 7:15pm, before eventually being cancelled.

To add insult to injury, both to the distressed Boca players and the 60,000 River fans, CONMEBOL ordered the match to be played the following day at 5pm.

Players and fans both made their preparations again on Sunday morning, but by 2pm Boca had managed to convince the CONMEBOL that their players were still in neither physical or mental conditions to contest the game on equal terms.

The game was postponed yet again, and both club presidents will be summoned to the organizers’ HQ in Paraguay on Tuesday morning to discuss when the final could be played.

Scheduling is tight, as the security forces insist on an afternoon kick-off, but the G20 summit is being held in Buenos Aires on 1 December. Saturday 8 December appears to be the next available weekend slot, which gives the winners little time to prepare their trip to UAE for the World Club Cup.

The vandals and criminals on the streets took all the headlines, but don’t forget 99% of fans were in the stadium ready to go by 4pm yesterday.#CopaLibertadoresFinal https://t.co/th6rpK5SkV

Meanwhile, it should be mentioned that Boca have made a formal request to be handed the victory by forfeit, just as River were when the 2015 second round tie was abandoned after the infamous pepper spray attack on their players in La Bombonera.

This seems unlikely given the bulk of the attack happened well outside River’s premises, but is not entirely unthinkable on a continent where matches are routinely decided “at the desk” as local fans call it.

All in all, the Copa Libertadores final 2018 will go down as one of the saddest and most shameful episodes in Argentine football history, regardless of the final outcome. People in the country have grown weary of the fact that violence has poisoned the sport they are so passionate about.

One of these teams will be crowned South American champions one way or another over the coming weeks, but you can’t escape the fact that it will taste bittersweet given how the occasion has been marred by violence that the entire world witnessed.

South American football has spectacularly missed a precious chance to improve its battered reputation, and it’s difficult to predict where things go from here.

For further updates on events follow WFi on Twitter at @WorldFootballi and River Plate in English at CARP_English.