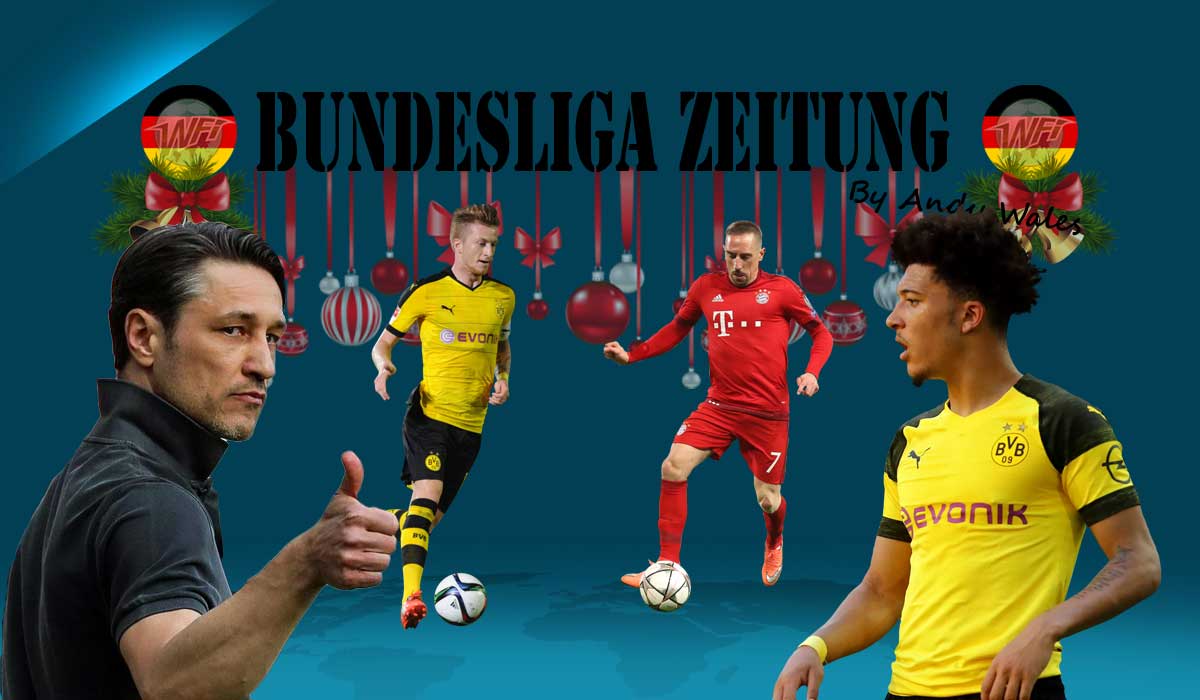 The final week of action before the winter break in the Bundesliga saw another “Engische woche”. That translates as English week and is the term used when there is a full midweek fixture schedule in the Bundesliga.

Before we get to that, the week began with the draw for the first knock-out stage of the Champions League and for the three Bundesliga clubs still in the competition it was all about England in this Englische woche.

In a stand out tie, Bayern München face Jürgen Klopp’s Liverpool. Klopp is still a significant and high-profile name in Germany, this only adds to what is already a huge tie between two of European football’s titans.

The history between Bayern and Klopp during his Dortmund days is well documented and will likely be the focus of the media build up to the first leg.

Aside from the Klopp factor, this will be a huge test for this Bayern side, taking on a team whose style and strengths have caused them issues this season.

Been waiting for a Bayern v Liverpool matchup since 2001! This is going to be a very special tie! 😮 pic.twitter.com/3lCikMLaDl

The fact the first leg is away could also be an important factor, but Bayern have recently looked more settled under Niko Kovac and who knows what might happen between now and 19th February.

Current league leaders and this year’s “Herbstmeister” Borussia Dortmund have also been handed a difficult tie. They will also face Premier League opposition in the shape of Tottenham Hotspur.

The two clubs have faced each other in European competition over recent years, but both are in a stronger position than the last meeting. On paper, Dortmund should just have too much for Tottenham, but it may depend on Dortmund having more defenders fit than they currently have.

The other Bundesliga v Premier League head-to-head will see Schalke host Manchester City. It’s been a tough season for Schalke, despite qualifying for the knock-out stages of the Champions League and it’s unlikely to get any easier in this tie.

Manchester City are one of the best teams in Europe and former Schalke player Leroy Sane will doubtless be looking forward to making his return to Gelsenkirchen. If Schalke progress from this, it will be a huge shock and the upset of the round, but I find it hard to see anything other than a convincing win for the English champions at this stage.

Staying on Schalke, it’s been another testing week for them domestically. A draw away to Augsburg was followed up by a 2-1 home defeat to Leverkusen on Wednesday, which led to their weekend game against Stuttgart being labelled as a ‘relegation six-pointer’. Not the position anyone expected Schalke to be in at this stage when pre-season predictions were being made. Clichés aside, Schalke responded well and duly dispatched Stuttgart 3-1.

Undoubtedly, it has been an uncomfortable second season in charge for Domenico Tedesco. The highly rated coach has had many questions asked of him and he clearly still has much to learn, but if Schalke are to push on after the winter break then moves need to be made in the transfer market.

German clubs typically don’t do a lot of business in January, but Schalke need to buck that trend and recruit two or three players if they are to improve.

All good things must come to an end. Borussia Dortmund have lost in the @Bundesliga_EN for the first time this season after falling to a 2-1 defeat at Fortuna Düsseldorf.

On the bright side, #BVB are still six points clear 🖤💛 pic.twitter.com/jVCv4JVpNV

All the talk midweek was of Dortmund finally losing their first Bundesliga match of the season. It came in shock fashion, at nearby Fortuna Düsseldorf, who upset Bayern by snatching a draw at the Allianz just a few weeks ago. Lucien Favre rotated his team, which is to be expected in the circumstances, but what was not to be expected was flat performance the leaders gave.

Düsseldorf got their tactics spot on, took an unlikely two goal lead and although Jadon Sancho came on as a late substitute to help create a goal, hung on for a well-earned victory.

Dortmund dropping points gave the chasing pack hope and Borussia Mönchengladbach had the gap down to six points with a win over Nürnberg. It meant that Friday night’s match at the Westfalen was a blockbuster – Dortmund playing host to Gladbach.

They say the test of a team is how they deal with defeat and a much stronger Dortmund XI certainly showed their mettle. Sancho was again the key man, leading the Gladbach defence a merry dance and it was no surprise that he was the one who opened the scoring.

A Christoph Kramer goal on the stroke of half-time gave the visitors parity, but Marco Reus was on hand in the second half to provide the hosts with the win they deserved.

Their closest challengers now are Bayern, who have won five consecutive Bundesliga matches since their draw at home to Düsseldorf.

The pressure on Kovac has subsided in that time as performances and results have improved, even if the Champions still don’t look like the imperious team they once were.

They successfully navigated a potentially tricky home game to RB Leipzig and then finished the ‘Hinrunde’ with an impressive and surprisingly comprehensive 3-0 win away at Frankfurt.

Understandably, much of the pre-game focus was on Kovac returning to his former club. Eintracht have been impressive this season and the expectation was that this could be a potential banana skin for Bayern.

However, Kovac left his old stomping ground with his head held high and all three points in the bag, leaving Bayern six points behind Dortmund at the half-way stage.

One bit of news that broke on Sunday was Bayer Leverkusen announcing the departure of Heiko Herrlich. Perhaps the fact that the club sit mid table, despite having a squad with an awful lot of attacking talent and all the rumours that had been surrounding his position, we should not be too surprised. Replacing him with Peter Bosz however, whose exciting start at Dortmund last season very quickly disintegrated, is an interesting decision to say the least.

Rumours had been circulating throughout the week that it was on the cards, but given Leverkusen just recorded back-to-back wins and Rudi Völler’s strong defence of Herrlich, it’s still something of an eye-opener. Bosz will want to show he’s better than his Dortmund tenure suggests and Leverkusen will need him to be.

It’s been an intriguing and exciting Bundesliga season thus far and it’s going to be interesting to see if Dortmund can maintain their form when we resume in a month’s time.

Until then, it’s Frohe Weihnachten and ein gutes Neues Jahr from the Bundesliga Zeitung