James Jeggo: The Austrian Australian On Life In The Bundesliga 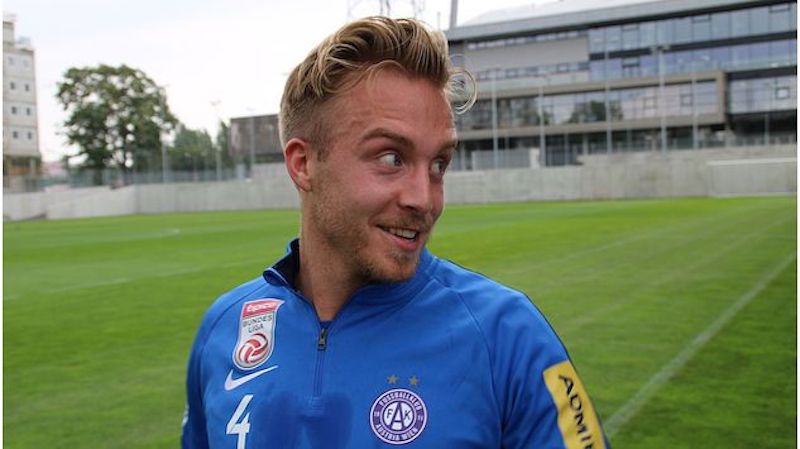 James Rowe interviewed Austria Vienna midfielder James Jeggo and spoke about settling in his new club in Austria Vienna, his time and Sturm Graz, and coming through the youth team to play for Melbourne Victory.

You signed for Austria Vienna in May 2018. How are you enjoying your time at the club so far?

My time at the club so far has been really good. Obviously I knew the club having been in Austria beforehand at Sturm Graz, and I knew the stature of the club.

I was really excited with the club’s plan going forward and the challenge it would present.

I have settled really well, although I got injured in pre-season and had to have an operation on my ankle which set my back a bit, but since I have been fit and I have been playing regularly and I am enjoying it.

How would you describe Austria Vienna as a club? Looking from outside it appears to be the biggest club in the country. Do you notice a big difference between Austria Vienna and Sturm Graz?

Yes, definitely, that is the first thing that you notice about the club that it is very big and with that comes expectation and the expectation to do well.

Austria Vienna also have resources that some clubs in Austria do not have access to and the club give you every chance to be successful.

That is also what attracted me to the club because I am at the age where I want to play regularly, win things, and contribute to teams winning things, and I thought I could do that here at Austria Vienna .

It’s a big club that wants to be playing European football on a regular basis, and it’s an exciting time having just moved in to the new stadium back in the summer.

You spent two seasons (2016 – 2018 ) playing for Sturm Graz. How do you look back on your time there, and what were your highlights?

I loved my two seasons at Sturm Graz, and it was my introduction into European football.

It was the perfect step for myself and we probably had two of the most successful seasons that the club have had in the last five or six years.

We had a great bunch of players who grew together over the two years and that culminated in winning the Austrian Cup last season, which is my biggest highlight to date, not just in Austria but also in my career so far.

We also finished second and third during my time there, and played some really good football too, and had some great moments so it is a time I look back on fondly.

I wanted to take you back to the early part of your career. You spent three years playing for Melbourne Victory in Australia. How would you describe them as a club and how would you look back on your time there?

Melbourne Victory are a massive club and will always be a club that I hold dear because I started my career there and came up through the youth team.

I believe that in Australia Melbourne Victory have set the benchmark in everything in terms of on the pitch, but also off it too, with their crowds and the way that they do things.

I loved my time at the club. I learned so much and I think it stood me in really good stead in my career.

I look back on my career and I am happy that I came through at that club.

You see constantly year in year out what they do in the A League and how they go about their business that it is a massive club that sets the benchmark in Australia.

You have had a fine career so far in Australia and Austria, could you say who were the best players you have played alongside in terms of talent and ability so far in your career?

Yes there have been quite a few. If I go back to my time at Melbourne Victory I was lucky enough to play with Harry Kewell for a season and he is someone who has been at the very top of football playing for big clubs and in a Champions League Final.

It was great for me as a young player to be around such a player and see how they go about their business day to day, how professional they are, and how they look after themselves.

In Australia you are lucky that as a young player, with the marquee signings and foreign player approach you get a lot of talented foreign players coming to the country who have played at a high level in Europe.

We had two such players when I was at Adelaide United in Marcelo Carrusca and Isaias Sanchez, both of whom were very skilful players who were brilliant. It was massive to train day in and day out with them and play alongside them in midfielder.

I learned so much from them both and they played massive parts in me being able to take another step in my career.

As a midfielder are there any difficult opponents you have faced that have stood out for you in terms of quality?

Of the top of my head the best player I have come up against was when we played Fenerbahce in an Europa League qualifier in Istanbul, and Mathieu Valbeuna played.

He was frighting just in terms of quick and sharp he was. You could not get the ball off of him.

He has such a low centre of gravity coupled with power and speed.

Those matches as a player are the best matches to play. When playing against top players like that you get to see first hand, not just the quality they have, but also what you need to do and how you can improve your game to get as close to that level as possible.

Finally James. Are there any particular managers you have had in your career so far that have been influential in your development as a professional footballer?

Yes, my youth team coach at Melbourne Victory was a Welshman called Darren Davies, and he was absolutely massive for me.

When you are in youth football, and the type of player I was as a midfielder, you want to do it all and get on the ball as much as you can and spray passes and get in the box.

He helped me make that jump from a youth footballer who was all over the pitch to being a disciplined player who can come in to a professional team and do a job week in, week out.

Current Austrian national team manager Franco Foda was my manager at Sturm Graz, and although he is not a really personal manager he set high standards during my time at the club and helped me make the transition from Australian to European football.

He was very honest, and if you performed for him week in, week out you were in the team, and if not you were out.

Even in training he never let anyone take their foot of the gas and such an environment helped me adapt to European football which has stood me in good stead during my career so far.